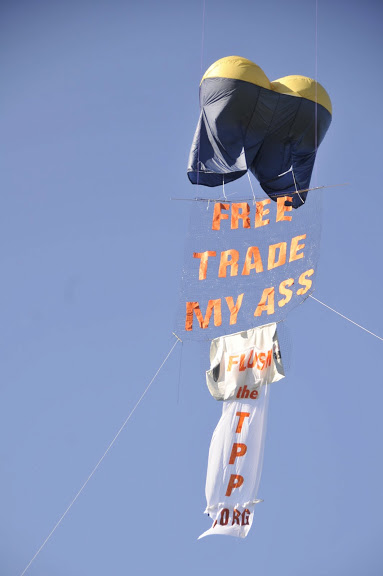 FDL’s/Cafe-Babylon’s juliania first brought us news from ScoopNews.com about the ‘inter-session’ meetings:

“Moves to get the Trans-Pacific Partnership Agreement (TPPA) to the point of sign-off by the end of the year went into overdrive at the round just ended in Brunei, according to Professor Jane Kelsey who was present as a ‘stakeholder’ for the final few days.

Only the most problematic chapters met in Brunei. They included intellectual property (which discussed patents on medicines), state-owned enterprises, environment, investment and market access for goods, including agriculture.

‘To have any chance of pulling off an outcome, groups negotiating some chapters will have to meet every month between now and December.’

Detective work indicates that informal ‘inter-sessional’ meetings on six chapters* are scheduled within the next four weeks – all in North America.

‘“Inter-sessional” is a misnomer’, says Professor Kelsey, ‘because they are not planning any more formal sessions. There will be no access for the media or stakeholders to these smaller meetings.’  The chief negotiators will apparently meet in Washington DC from 22-24 September, with the US in the chair. “

Barack Transparency Obama will chair the final scheduled session in Bali October 6-7.  Jane Kelsey reports that the trade pact’s chapter on state-owned enterprises has been a bit of a sticky wicket, and he may have to give it up.  And that the SOE chapter has been a centerpiece of his sales pitch to Congress on the TPPA. Without it, she says, Congress may refuse to give the President “fast track” authority and retain their power to pick apart any final deal.

Will he don his darkest shades, slap a fedora on his head, and make the Ministers an offer they can’t refuse?  Stay tuned…

‘There are still many twists and turns to go in these negotiations. The problem is that we will have even less chance to know what they are and what political deals are being made to eliminate them.’

Electronic Frontier is reporting that international criticism is increasing now that the talks have become even more secretive than those of the past several years.  They are most sincerely concerned about the uber-secrecy of the meetings:

“We only heard about a TPP meeting on intellectual property in Mexico City in September through the diplomatic rumor-mill, since the US Trade Rep is no longer bothering to announce the dates or locations of these closed-door side meetings. During this round in Mexico, countries that have been resistant to U.S. demands to sign onto highly restrictive copyright enforcement standards may ultimately be strong-armed into doing so.”

The writer lists some examples of objections by upset nations, including several calls for their governments to provide the secret texts of the finalized chapters, and proposal language, and allow debates in their legislative bodies.

“The copyright provisions in the TPP will carve a highly restrictive copyright regime into stone and prevent countries from enacting laws that best address and promote users’ interests. In this final stage, it’s time for us to demand that our lawmakers join those who are already denouncing this agreement. We must drag this out into the light and reject international laws that uphold corporate interests at the expense of users’ rights.”

You can sign Public Citizen’s Global Trade Watch petition to stop the Fast Track Authority at the link. Remember, it would only require a simple majority.  But hell, we need the text language so we can debate it!  And shut it down!  Eh, Alan Grayson?

But Good God all-Friday, as they say around here; this stuff gets me seriously riled up!  I reckon we all have sections that peeve us the most purple, but for me it’s the Monsanto provisions, the language that provide a US military presence for signatory nations, and the investor state provisions forced by tribunals, and paid with our tax dollars!  Ah, hell, and the BigPharma language.  This is clipped from a diary I did earlier that also has several short, but good video interviews:

“The rollback of the modest Bush-era reforms is shocking, but what is truly stunning is the new proposal to empower pharmaceutical firms to attack the medicine formulary systems that New Zealand, Australia and other developed countries have used so successfully to achieve what is ostensibly an Obama administration goal of reducing sky-high drug prices.”

Bang: you’re dead.  And that’s obscene.  And well, Peace on You, you sociopathic capitalist pigs; and I mean that in the kindest, but also most scatological sense, of course…

Popular Resistance has announced a Rally During the Trans-Pacific Partnership Lead Negotiators’ Meeting in Washington, DC, Friday, September 20, 2013 at 12:00 noon.  FlushtheTPP.org has a map of (not nearly enough) more teach-ins and protests during the week.  There’s a form to fill out to build your own, though!

We might be justified in hoping that Edward Snowden’s revelations could have a negative impact on the TPP, and even more on TAFTA, given the level of rancor they’re produced.  But:

We just can’t let the Overlords win this one!  It will be Game Over for the 99%!  Please raise all the ruckus you can with your friends, neighbors, co-workers!  Stopping the Fast Track ain’t near enough, but remember: Obomba said he’d fast-track it in his last SOTU!  So feel free to tell your Obot friends that their hero is going full steam ahead to help kill their futures, and those of other ordinary folks around the world, not to mention the planet we live on.