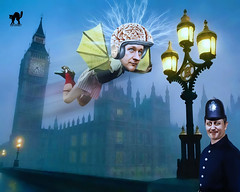 From WikiLeaks twitter, the announcement, and a link to ‘weird news’ at the Mirror, UK:

‘If your current affairs-savvy child has always wanted to recreate the actions of the notorious whistleblowers then now’s their chance.

‘Edward Snowden and Julian Assange have become infamous for their involvement in whistleblowing and leaking on a national and international scale. But now they’re really making the headlines – as action figures.

The 12in (30cm) toys are manufactured to order by thatsmyface.com and come made to order.

Snowden became a household name when he disclosed a large number of classified NSA documents to several media outlets last year. And now your child will get the chance to recreate the 30-year-old former-CIA employee’s actions in your front room.

Retailing at $99 all money received will go to the Freedom of the Press Foundation.

An Assange figure is also available with all proceeds will go to the Australian’s infamous website WikiLeaks.

Here is the Edward Snowden figure, but allow me to issue a warning: Do Not access the Celebrity Action Figures link on the right hand sidebar unless you have a strong stomach, or are interested in the packages that include long hatpins (‘Count them! Seven with pearl-like beaded heads!’)/s It comes with this disclaimer:

‘Edward Snowden and Freedom of the Press Foundation does not sponsor, authorize, or endorse this site or our Edward Snowden figure.’

Both figures come with options on ‘outfits’.

Here is the Julian Assange figure.

Now for the thrifty among us who happen to have some *spare* Action Figures™ in a box somewhere, the company offers this side-splitting option:

‘By selecting Head only in the Outfit selection box above, you can also buy Julian Assange’s head for $60 only and fit it onto your own 12-inch figurines. Many more photos in our Assange Photo Gallery.’

So hard to choose! But the Oregon company does say that ‘proceeds’ (not ‘profits’) will go to the aforementioned organizations, so…snap ‘em up, dears. Never too early to model great behavior with appropriate toys, I say! Wags on the thread: ‘Do they come with brass balls?’ ‘In related news, they have an Obama Inaction figure, and best: ‘Where is the Chelsea Manning figure?’ Indeed.

On a more sober note, Wikileaks linked to this paen to Chelsea Manning:

‘What we call the Arab Spring was the result of many seemingly small things, butterfly effects. One of them was a courageous woman named Chelsea Manning. If the U.S. will take 35 years from Chelsea Manning’s life, may it console her that she has given us, Arabs, the secret gift that helped expose and topple 50 years of dictatorships.

For me, it all started in mid-October of 2010, with a direct message on Twitter from a good friend of mine. He belonged to a circle of digital activists with whom I worked closely with for years on many advocacy projects in the Arab World, from anti-censorship strategies and campaigns to building and training non-violent protests movements. In that DM he urgently asked me to speak over encryption with him. After one single OTR chat session, he sent me an encrypted zip file containing a trove of around 400 texts files organized in about 15 folders. All the folders were named after Arab countries: Tunisia, Egypt, Lebanon, Saudi Arabia, Yemen, Morocco, Bahrain, etc. I didn’t know what was in them. He told me just before ending the chat session: do something with them, I trust you and trust your knowledge and judgment.

At that time I was based in Berlin, after having to flee my home in Tunisia 13 years before to avoid becoming a political prisoner. I had a position as Advocacy Director at Global Voices, a non-profit that supported international citizen media. That gave me the freedom to choose where I lived; I just needed a laptop and a good Internet connection. I’d also co-founded nawaat.org seven years earlier, a collective political blog focused on Tunisia, and censored in Tunisia by the government of Ben Ali.

I went out with my laptop and sat on the terrace of Morena cafe in the anti-establishment and counterculture neighborhood Kreuzberg. By then, I was one of a handful of people on the planet who had access to this sensitive dataset. I jumped into Tunisia’s folder, opened the first file and lit a cigarette, then the second file, the third, and the rest of the thirty files related to my country, with almost the same number of cigarettes. It was the Wikileaks U.S. State Department Cables, widely known as Cablegate, with all the political scandals, nepotism, and corruption of the disgraced Ben Ali regime. I didn’t have time to read the other Arab countries’ files. I knew I had in front of me a valuable set of documents that could be turned into action. This is what we were looking for during the last decade of strategizing and theorizing about citizen dissent media, diaspora media, exiled media, digital activism: the ability to inform and transform. This was momentum.

And days should be calculated for the sake of history. Twenty days passed between the release of the Tunileaks cables, on November 28th 2010, and the start of the Arab Spring, on December 17th, 2010. That was the day a poor street vendor named Mohamed Bouazizi set himself on fire. In a chat with a British journalist this year, Ben Ali’s propaganda minister Oussama Romdhani confessed that “Tunileaks was The coup de grâce, the thing that broke the Ben Ali system.” It wasn’t the information about corruption and cronyism, Tunisians didn’t need Tunileaks to tell them their country was corrupt. Tunisians had been gossiping and joking about the corruption for years. What was different was the psychological effect of an establishment confronted so publicly with its ugly own image. It was that the government knew that all people knew, inside and outside the country, how corrupt and authoritarian it was. And the one telling the story wasn’t a dissident or a political conspirator. It was the U.S. State department, a supposed ally.’

Again, sami ben gharbia is the director of globalvoicesonline.org. Tunisians seem to have gotten the best outcome to date of the Arab Spring revolutions, although I couldn’t find much recent coverage.

Earlier this week WikiLeaks also linked to their 2012 interactive Spy Files Map (Spoiler: We’re #1!) and a video key for user hints, as well as ‘Private Intelligence-Security Contractors Work With and For US Spy Agencies (2013). See Who They Are’. I’d never seen it, and I loved the Creepy Factor of the delivery.

This entry was posted in resistance under oppression, security state fascism. Bookmark the permalink.