Anonymous US Officials Talk to WaPo about the CIA Torture Report 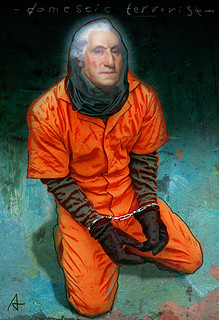 And yes, Washington Post, let’s not call it ‘the Senate Interrogation Report’, please: it’s about torture.

The report apparently chronicles investigations into the experiences of dozens of detainees in the web of black sites, and describes the internal struggles over torture methods themselves, but also its efficacy, including testimony of insiders saying that virtually no actionable intelligence was procured by the methods. In some cases, insiders made cases for the fact that the torture was ordered despite the fact that there was general agreement that prisoner X or Y had already told everything he knew. That fact leads one to believe that torture was then either punitive, purely sadistic, or Joseph Mengele-ish experimentation given that ‘doctors’ monitored the ‘effects’ of the torture. It’s hard for one’s mind to grasp.

The officials spoke about a previously unknown torture techniques never having been approved by the Justice Department (OMG), used in Afghanistan: dunking a terror suspect in a vat of ice water. Also:

“If declassified, the report could reveal new information on the treatment of a high-value detainee named Ali Abdul Aziz Ali, the nephew of Khalid Sheik Mohammed, the self-proclaimed mastermind of the Sept. 11 attacks. Pakistan captured Ali, known more commonly as Ammar al-Baluchi, on April, 30, 2003, in Karachi and turned him over to the CIA about a week later. He was taken to a CIA black site called “Salt Pit” near Kabul.

At the secret prison, Baluchi endured a regime that included being dunked in a tub filled with ice water. CIA interrogators forcibly kept his head under the water while he struggled to breathe and beat him repeatedly, hitting him with a truncheon-like object and smashing his head against a wall, officials said.

As with Abu Zubaida and even Nashiri, officials said, CIA interrogators continued the harsh treatment even after it appeared that Baluchi was cooperating. On Sept. 22, 2003, he was flown from Kabul to a CIA black site in Romania. In 2006, he was taken to the U.S. military prison at Guantanamo Bay, Cuba. His attorneys contend that he suffered head trauma while in CIA custody.”

Apparently the report also criticizes the CIA for their many repeated mischaracterizations of detainees as ‘Al Qaeda No. 2’, or the like, as so many of us have noticed over the years. The WaPo article also references:

“Two other terrorism suspects, from Libya — Mohammed al-Shoroeiya and Khalid al-Sharif — endured similar treatment at Salt Pit, according to Human Rights Watch. One of the men said CIA interrogators “would pour buckets of very cold water over his nose and mouth to the point that he felt he would suffocate. Icy cold water was also poured over his body. He said it happened over and over again,” the report says. CIA doctors monitored the prisoners’ body temperatures so they wouldn’t suffer hypothermia.”

The piece also rather blithely states that the “…sprawling network of secret detention facilities, or “black sites,” (tha)t was dismantled by President Obama in 2009”.

Now, how true that piece of publicly asserted conventional belief is may just depend on one’s credulity and narrow definitions. Remember, according the NYT’s May 29, 2012 original piece on Obama’s Terror Tuesdays and ‘baseball cards’, writing about Obma’s executive orders ending torture, closing Gitmo, etc:

“What the new president did not say was that the orders contained a few subtle loopholes.’ Snip]

‘‘The day before the executive orders were issued, the C.I.A.’s top lawyer, John A. Rizzo, had called the White House in a panic. The order prohibited the agency from operating detention facilities, closing once and for all the secret overseas “black sites” where interrogators had brutalized terrorist suspects.

“The way this is written, you are going to take us out of the rendition business,” Mr. Rizzo told Gregory B. Craig, Mr. Obama’s White House counsel, referring to the much-criticized practice of grabbing a terrorist suspect abroad and delivering him to another country for interrogation or trial. The problem, Mr. Rizzo explained, was that the C.I.A. sometimes held such suspects for a day or two while awaiting a flight. The order appeared to outlaw that.

Mr. Craig assured him that the new president had no intention of ending rendition — only its abuse, which could lead to American complicity in torture abroad. So a new definition of “detention facility” was inserted, excluding places used to hold people “on a short-term, transitory basis.” Problem solved — and no messy public explanation damped Mr. Obama’s celebration.’

“Pragmatism over ideology,” his campaign national security team had advised in a memo in March 2008. It was counsel that only reinforced the president’s instincts.”

Emptywheel’s post about the WaPo article, ‘CIA’s Self-Authorization for Ice-Drowning Human Beings’, reminds readers of her repeated contention that the CIA has been lying to Congress all along, but while that certainly seems to be the case, one might wonder what the Intelligence Committee ‘Gangs’ in both houses did know, and did not reveal.

Emptywheel links to the Bradbury Techniques Memo (warning: hard reading), references page 10, but others are almost too hideous to read as well, plus a letter from Scott Muller, CIA, to Jack Goldsmith, OLC, re: legal principles applicable to the CIA interrogation program.

Apparently some of the anonymous officials believe that it’s not the detainee ‘abuse’ that’s the most troubling part of the report, but the discrepancies between senior CIA officials and lower level officials reports. Hmmm; it must take an Insider to reckon things that way.

And no, no new administrative punishment or further ‘inquiry into a program that the DOJ has investigated repeatedly is recommended in the report. Wagon’s HO!   Forward, not Backward!