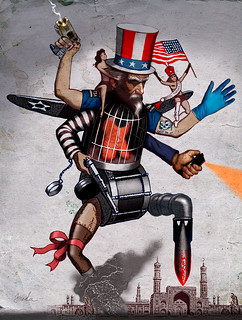 (With gratitude for reprint permission from the author at newsfromsomewhere.org):

US vice president promises to forgive Venezuela if it goes away

BACKYARD (Rooters agency) – In a move widely applauded by those who know which side their bread is buttered on, the US vice president today attacked the Venezuelan government over its stubborn refusal to get out of the way for the good of the hemisphere.

The vice president, who is visiting Backyard for some reason, in an interview with one of its newspapers, dismissed as the invention of “totally false and outlandish conspiracies” the idea that the various political organizations given millions of dollars by the US over the last decade might have some connection with the recent demonstrations in Venezuela.

“That is nonsense”, the VP declared. “We always told them not to demonstrate. But those people love us and would demonstrate even if we didn’t pay their leaders.

“Instead of making such charges, that pretend president of theirs should listen to the Venezuelan people – those we have appointed to speak for them”, he said. “He should resign, and take Venezuela with him to wherever he goes. We don’t care, as long as he leaves the oil.”

In what was described as a “frank admission” by his press office, the VP acknowledged that in the past the US government had – every now and then, and mostly by accident or the fault of a different party – supported military dictatorships in various parts of Backyard.

These minor slip-ups, he pointed out, were entirely the fault of the Soviet Union, which, “if it hadn’t existed, would have forced us to find a different pretext for keeping our servants in line.

“Now that the Soviet Union is no more, the whole world can unite in opposing the menace of Islamic fundamentalism or … somebody shine a light, I can’t see the rest of the list.

Countering Islamic Communist propaganda that the US does not really support human rights, the vice president stressed that, during the Pinochet dictatorship in Chile, “US ambassador Harry Barnes and others publicly defended the victims of repression.” He added, “If we hadn’t put Pinochet and his torturers in power in the first place, do you seriously think he would have listened nearly as much to our complaints?”

Did it take you a few ticks to even remember who the VP of our UnFair nation is? If so, you ain’t the Lone Ranger. Like me, you’re Tonto. After three tics, we all probably remember it’s VZ Alarm-Alarm-O! Biden. Go get them Commies, Joe!

Now Mr. Somewhere might have mentioned the Fumble-Footed Secretary of State Ketchup-Kerry, since he has been quite active in promoting an internal war-by-proxy (James Petras, bless his heart, rather scathingly calls it a Terror War by Proxy), and denying it, of course.

But Mr.somewhere is so right: take Bolivarism somewhere, anywhere, but leave the oil…and maybe some of the Elites who actually deserve your brand of Democracy, unlike those low-land peasants with the dark skin who like their new social contracts far too well. What could be more dangerous to Western capitalism than an ideology that each citizen actually matters, and should have a say in how they’re governed? A nation that (gasp) nationalized its oil in order to more fairly distribute the proceeds to the people is indeed scary, and worth demonizing. Free universal healthcare and education? Egad! It’s spreading in Our Backyard! Obama/Kerry and the deep state rulers need lackey neoliberalized satellites in Latin America, not more socialists on the prowl, spreading their infernal credos about justice for all!

Small wonder, then, that the Scribes to the Oligarchs continually lie, misrepresent who is actually committing the worst of the violence on the streets in VZ, fanning the flames for regime change. Putch; overthrowing a democratically-elected government that (sigh) keeps winning elections. That they are aided by a cavalcade of Hollywood Celebrity Elites with #SOS VZ adds insult to injury, of course. Gucci Solidarity™!

Aha: cue the ‘What’s really going on in Venezuela’ video, courtesy of Joannes Carvajal, recommended by long time journalist on VZ. Boy, howdy, did she save me a hell of a lot of words!

Many of the faked photo tweets and propagandized and (ahem) misattributions were outed by Dr.Dawg’sBlog. His favorite is also my own: a religious procession, reincarnated as an anti-government protest.

Congress is said to be debating sanctions against Venezuela, as per a bill brought by Florida CongressCritters in the paid service of the Cubano ‘Exile’ community. All your favorite names and posturing are there…

Some of those ‘peaceful’ protesters were paramilitary groups having been discovered with C-4 and other weapons (photos here) have been detained; and three Air Force Generals were arrested for plotting a coup against the elected government, having been denounced by lower-ranking officials. Maduro gave thanks for the powerful moral force of our National Bolivarian Armed Forces.

But po’, po’, SoS Ketchup-Kerry, who said on March 4 that the Obamarama administration was:

“prepared” to invoke the charter of the Organization of American States (OAS) and impose sanctions.

However, just days before Kerry threatened to invoke the OAS charter, the OAS itself issued a statement ruling out intervention or any sanctions on Venezuela, and expressing solidarity with the Maduro government. 29 OAS member states voted in favour of the decision, while the US, Canada and Panama were the only dissenting votes.’

And Gee-Whilikers; WikiLeaks posted moar cables recently, including these from 2006: ‘WikiLeaks cable – USAID/OTI program objectives in Venezuela’, showing their concern for their brand of democracy for some, since:

“¶1. (S) During his 8 years in power, President Chavez has
systematically dismantled the institutions of democracy and
governance. The USAID/OTI program objectives in Venezuela
focus on strengthening democratic institutions and spaces
through non-partisan cooperation with many sectors of
Venezuelan society.
¶2. (S) In August of 2004, Ambassador outlined the country
team’s 5 point strategy to guide embassy activities in
Venezuela for the period 2004 ) 2006 (specifically, from the
referendum to the 2006 presidential elections). The
strategy’s focus is: 1) Strengthening Democratic
Institutions, 2) Penetrating Chavez’ Political Base, 3)
Dividing Chavismo, 4) Protecting Vital US business, and 5)
Isolating Chavez internationally.”

Well yes; those shining and ever-so-helpful NGOs that are celebrated so often!

Surprisingly, the NYT published a piece by Nicolas Maduro yesterday: ‘Venezuela: A Call for Peace’. The comment stream is not surprising, given the class status of Venezuelans who have web connectivity.

Make of this ‘Interview with Ex-CIA Collaborator: “The CIA’s Plans in Venezuela Are Far Advanced” what you will.

And for further late-breaking yucks :

USAID! USAID! (I did look for that  website named ‘USAID is CIA’, but it seems to have disappeared. ..

What we need are moar har hars! Cubano exiles are said to be channeling money to the ‘peaceful protests’ against the Maduro government now.

Good fortune to the Maduro government, Bolivarism, and the people of Venezuela. Don’t let the Devil Get Ya Down! You don’t want a ‘democracy’ like we have.