I have just finished my first reading of this last novel by Peter Matthiessen, and I came online to see what others found and experienced in reading this powerful book.  Most of what I found tells well the subject matter and impact – best described in the various summaries of the work.

What I did not find, and missed not finding it, was a discussion of the questions raised and answers given.  Most reviews seemed to feel the novel gives no answers, and certainly it has that effect upon one in the last pages where one would expect an answer to be found.  But it is a truly beautiful work, and I think it a great shame that the internet seems not to contain, at least so far, meaningful discussion of what it might mean – most reviews found it a stark though compelling compilation of the frailties of the human character and the inadequacy of religion to address such frailties in any meaningful way.  While these are indeed subjects within the text, I find so much more therein that none of the reviews I have found so far have adequately addressed.

I am beginning my second reading.  It is not a long novel – can be read in one night really.  On this forum we’ve discussed many of the issues raised, and they are harsh issues indeed.  To begin with, have a look at ‘Lady with an Ermine’. 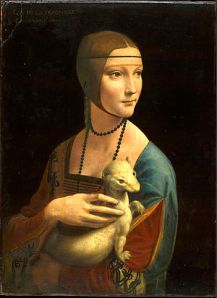 The novel begins and ends with this Leonardo Da Vinci painting.

As I explore it for the second time, I would so love to have company on this journey.  It takes us into the mind and heart by means of a mindless, heartless place – Auschwitz.  If that was not hell, then we do not know what hell is.

Come with me and see where we end up.

23 responses to “Peter Matthiessen’s “In Paradise””