A small war over access to Recapture Canyon east of Blanding has been brewing since 2005, when some apparent locals constructed a road to accommodate ATVs and other off-road vehicles. Concerned environmental, wilderness, and archeological watchdogs asked alerted the local BLM office, and after surveying the damage done to lovely Recapture Creek’s lush riparian habitat and the several hundred Anasazi ruins and burial sites dating from over at least two thousand years ago, the BLM closed the illegal road to motorized vehicles in 2007.

Well, that sincerely pissed off some of the local members of the Patriot Movement, Sagebrush Rebellion, and What.Ev.Ers, and they staged an ATV protest at another wilderness study area in 2009. By 2010, the Great Old Broads for Wilderness began trying to repair and assess some of the damage, and one fine day came to the canyon entrance and found a number of: ‘Wanted Dead or Alive: Great Old Broads for Wilderness’ posters had been nailed up. Ha.Ha.(grrrr.)

Unfortunately, I wasn’t able to find any CC photos to show you the sweet canyon, but here are some images, including some from the Great Old Broads and those ‘grrr-eat old patriots’. So, in another spate of irony I’ll show you this video made by Monte Wells who runs a motorized outfitting tour business, as in: not tours by horse, but by ATV. He also keeps this ‘Recapture our public lands’ theme alive on one of his websites. ‘Recapture Recapture’, get it? Yes, Monte; we get it in spades.

The San Juan County Commission had asked the BLM to consider a grand proposal for interconnected motorized right of ways, including Recapture Canyon, and have gotten a bit surly at the slow process under federal protection laws. So, feeling his oats after Cliven Bundy seemed to have ‘won a victory’ in Nevada recently, Commissioner Phil Lyman advertized an ATV protest ride, and the news of course went viral within that community (the redneck version of ‘the moccasin telegraph’, perhaps?).

Because see, it really doesn’t matter to them that there are over 2800 miles of back-country roads in the county that are open to motorized traffic, and a mere 14.3 miles closed to it. Oh, no: we have to hear shite like this out of their mouths (in print or video interview):

“They’ll make you spend millions so my grandmother can get to the bathroom, but they won’t let her on trails she grew up on.”

Plus all of the ‘My grandaddy ran cows here back in the day: don’t fence him out now that he’s old!’ harangues.“We were informed the federal folks decided not to attend,” said Charlotte Black, who supports the protest. “I’m glad; no one wants to see them with all of their SWAT gear and automatic guns.”

Or, from the Cortez Journal:

In 2007, the BLM closed the road to motorized traffic, saying it damaged natural resources and passes through Native American ruins.

“We were informed the federal folks decided not to attend,” said Charlotte Black, who supports the protest. “I’m glad; no one wants to see them with all of their SWAT gear and automatic guns.”

She and her husband, Pete, have been riding ATVs on the Recapture Trail all their lives, and run cattle on property adjacent to the trail.

In 2007, the BLM closed the road to motorized traffic, saying it damaged natural resources and passes through Native American ruins.

“The pretense in which it was closed was really silly. How much damage can a little trail cause? It doesn’t,” said Pete Black. “We used to be able to take our friends down here on ATVs, and I’m too old to walk it anymore.”

Well, boo-bloody-hoo; so go somewhere else. We used to hear some variation on that schtick at every wilderness meeting we went to. Some self-designated Sagebrush Rebels just say that it belongs to them, and screw the Federal government and the ATV they rode in on. And who cares about a bunch of dead Induns, anyway? Oh wait: they claim they (or the locals) can care for the area far better than the Feds, in this case, the BLM (Bureau of Livestock and Mining). . The canyon has been called ‘the most Anasazi site dense’ area in all of southeastern Utah.

“Vehicle damage to vegetation and riparian areas can be repaired over time. Damage to archaeological sites is permanent and the information about our collective past is then lost forever,” said Jerry Spangler, executive director of the Colorado Plateau Archaeological Alliance, a Utah-based organization that advocates for the protection of archaeological sites on public lands.

Environmentalists and Native Americans say the ban is needed to preserve fragile artifacts. Navajos claim the people who lived there and are buried there as ancestors.

“Those ancient sites are the equivalent to churches,” said Mark Maryboy, a former Navajo Nation Council delegate. “It’s very disappointing that they have no respect for Native American culture.”

The canyon, he added, has “tremendous” spiritual significance to Puebloan groups such as Hopi and Zuni and to the Navajo.

“(The ride) is nothing short of a slap in the face to Native Americans who treasure the cultural resources of that canyon as part of their past and present,” he said.

You may or may not have hiked or camped in any of the canyons near Blanding, but if you have, you likely had found all sorts of damage done by these machines and their riders. A favorite sport is to zip up red slickrock walls, or race over the delicate fields of cryptogamic (biological) soil that is virtually irreplaceable, but crucial to high desert ecosystem survival.

Oh, and don’t forget intentional or inadvertent looting of Ancestor Puebloan sites, including the grave-robbing of artifacts that can be sold to collectors or dealers who don’t care much about false or missing documentation as to provenance.

Coverage of Saturday’s event is quite varied as to numbers who actually drove their stinky machines up the trail, but at least two hundred were at the rally in a Blanding park beforehand. And yes, two of Cliven Bundy’s sons were there urging people to break the law to show them damn Feds, as were some well-armed Montana Militia members. The local sheriff and some deputies were there ‘just to keep the peace’, and some Feds stayed in the background taking names or something. They’d already announced that there would be no citations given that day, but perhaps later, yada, yada. The Sheriff said he wasn’t about to create some shootout, so the day passed ‘Peacefully’, according to the Cortez Journal. The er…Great Old Broads wisely decided not to attend.

In the OMG department, NewsMax reported this gem previously unknown to me:

The federal government owns two-thirds of Utah’s land, and the state’s Republican-dominated Legislature passed a law in 2012 demanding Utah be given control of those lands before 2015, excluding national parks. Lyman, the San Juan County official, believes it’s possible to reopen the canyon to ATVs while preserving the artifacts.

If you care to watch their antics, KSL.com has video of the ‘protest’, including a few interviews. Hilariously, with a national spotlight on him, butter wouldn’t melt in Commissioner Lyman’s mouth.

The Southern Utah Wilderness Society advises that we might take a moment to ask the BLM’s Monticello field office to keep the road closed permanently (e-form here).

One has to wonder if the BLM will simply knuckle, and if these groups will keep upping the ante as all this ‘state’s rights for me, but not for thee’ stuff spreads. Reading some of the quotes is hard for me: I’ve known a number of these folks for decades, and watched the movement spread in our county. What a sorry state of affairs.

Because it’s spring, and because I need an antidote to all this peckerwood horseshit, an apple blossom: 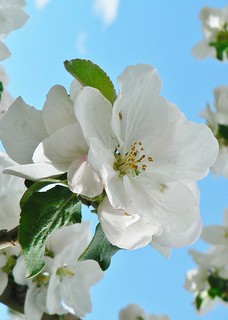 And for the Canyon and the folks who would rape and ruin her: a Diné Healing Song

This entry was posted in Uncategorized. Bookmark the permalink.