Over the course of our lives, we all must have received gifts that overwhelmed us with their thoughtfulness, suitability, and timeliness. One I received yesterday from Mr. wendydavis qualified in the first two ways, but as to the third, please consider the implications of its irony as you read about what may end up being my favorite present ever.

Over a decade ago I sustained some pretty severe brain damage during knee surgery, although none of the surgical team would ever even admit anything had gone awry. When I woke up from the anesthetic, among other horrors, I discovered that I’d lost all sense of time, basic arithmetic skills, boatloads of words, people’s names, and more annoying things like cognitive abilities.

Knowing a bit about different strategies and exercises that could help, and inventing a few of my own, I did gain back a lot of my brain over time. One avenue I chose for some healing was starting to write, first as a contributor to the local free press, then slowly online. At some point a few years ago, my healing seemed to have plateaued, which was quite discouraging, given that one upon a time I did have at least a certain amount of mental game. It was starling to learn how much intellectual ability depends on memory, especially of the short term sort. One needs to remember several ideas, words, concepts, at once in order to weave them into some coherent whole.

But ha! I did get basic arithmetic skills back eventually, and as a side note, I will say that the IRS officials who graded my forms for our family taxes were kind to me about my many errors. Every year when they sent my sent my pages back full of red ink, I imagined the look of bemusement on their faces as I looked at them, and read their…suggestions…as to what I’d done wrong.

Math skills? Whoa, Nellie, no! Truth is, I am now hooked on calculators and even do some simple math arithmetic with pen and paper, just in case. (oy) Oh, but time, time. Time is not my friend, and even which events in my life came before others requires knitted-eyebrow hard thinking, and I try to create milestone markers that sometimes help sort things out.

Laughing as I type because I’m recalling having created and printed birth announcements for our daughter’s first child. Upon receipt of the first batch, they were forced to nix them due to the fact that…er…I’d gotten the goddam year wrong. Pfffft. Okay, I made a second batch, over-nighted them, and got a call. Wrong year again, goddam. Thus, one of the standard family jokes in the family was any variation on: “Hell, y’all must know I’m just about to zero in on it!” Hmmm; maybe even the IRS agents had that same faith in me.

But over the past year it’s become clear that the damage to my noggin has predisposed me to dementia, whether of the Old Timers kind (as they say around here) or not, who can say?

But back to the gift. The woman Mr. wendydavis has worked for over the past ten years recently grew very ill, and seemed to be dying. He’d been remodeling four different houses on her big spread, and as her money supply grew short, began doing a lot of the work of the employees she’d had to let go. But a new one was nursing her before her son agreed to all in hospice workers to take over once she reached the point she required round-the-clock help. While she was by no means and easy woman, he was pleased to be able to offer her care and comfort before her death, and often acknowledged how much he’d learned in doing so. Love is action, of course, even more for those who might be well-meaning, but not easy to like.

Once she’d died, her son had some hard financial decisions to make, and one was how to sort through what myriad of her possessions to keep, sell, give away, and so forth. Now I will say that she seemed to have some extraordinarily nice stuff, including fine arts, jewelry, furniture, and whatnot. But still: stuff. Her son, generous soul that he is, told Mr. wd that anything he spotted that we might like, say so, and in all likelihood, he would gift the items to us.

But as joss would have it, Mr. wd had just had to spend weeks in Nebraska clearing out a lifetime’s full of stuff from his parents house, and he came back home with a burning mission to clear out this place in advance of the time our kids would need to be faced with the same unenviable task. So, long story short, we decided to just ask for a few bits and bobs here that wouldn’t clutter up our house much, mainly fabrics from the global south, a few pieces of rock crystal, a few fossils of sadly unknown origin, and such. He did, by the way, ask to bring home a number of her paintings to show me, not that we asked for any of them; he would need to sell them to keep the place afloat.

Time, that devil, whether it be an agreed upon reality or something else, it does make itself known in our lives, and having no sense of it can become a trial. By now, I’m down to writing myself little notes on the calendar next to the bed, like an ‘H’ for hairwashing day. Now, I try to wash it only every two days lest I go bald, as the hairdressers advise. But hell, most days I have to run to my laptop to discover what the hell day and date it even is, in order for my notations to have any instructional value whatsoever. Cripes, I feel like an idiot.

Last night Mr. wendydavis came in from work, laid down most of his assorted paraphernalia on the dining room table, straightened up, but with one hand behind his back. Perhaps I’d looked at him quizzically, but he said, “Go ahead and ask.”

“Ask what?”, my face must have asked. “Ask me what I brought you” (another wee family joke on accountta I don’t get out in the world much these days).

Bringing out a rumpled bag, he laid it on the table, and began to open it, possibly with a mite of trepidation. He pulled out a sweet little battery clock…that only marked the days of the week! I laughed with such mirth that I almost cried; what a lovely gift for a half-demented, crazy crone, old of brain before her time!

When I had a bit of time, I worked to get the clock out of its rather elaborate, not quite hermetically sealed cardboard packaging. What ho? I finally put my Walmart cheaters on, took it to the window’s light, and saw that it was secured by two tiny screws with large plastic washers. Okay, I went to get assorted jeweler’s screwdrivers: nope, they wouldn’t budge. I went through several sizes of Phillips head screwdrivers, and finally muscled those little peckerwoods off. The instructions for setting the clock were on the back of the box, so I gave it the old college try. “Poke the tip of a pen into one of the two indents in the center of the clock’s works, then rotate clockwise.”

Well, of course I needed to advance it six days’ worth, which meant spinning the sucker about three hundred times, the pen popping out at intervals. “Christ,”, I’m thinking, “what the fuck? Do they imagine some geezer needing to be reminded of the goddam day is already in a nursing home and some orderly will be doing this shit?” Okay, sit closer to the window, tip the clock back, jam the pen in ‘one of the two indents’, flip it back, crank the wheel, what.ev.er. But once I finally found a new batter that actually had some juice in it (the third one, mind you), I finally saw that the hand (singular) had actually noticeably advanced. Scoooooooooooorrrrre! Ha! That sucker was finally edging toward Saturday when I decided I’d hang it up in the morning, and reckoned I’d found just the right spot near the bed.

Yesterday was a long day, and I blessedly slept late. At 5:28 this morning, I whispered to Mr. wd, “It’s time to get up; do you want to use the bathroom first?”

I hung the clock before I even ate my toast. Here it is. Thank you, Mr. wd, thank you for sharing, Dana B. Maybe, just maybe, I’ll know that tomorrow is Sunday, and not a workday. If I can see the clock in the day’s first light, of course. Winter? No way; sorry, dear; it’ll suck to be you again. (Sure wish I’d gotten one awhile ago, grumble, grumble…)    :) 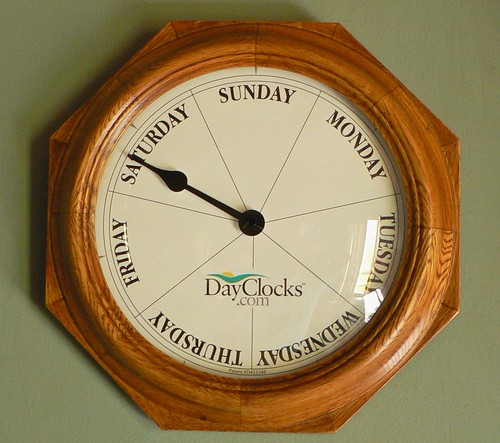