For the first time in at least a decade, a Killer Kop was indicted in Austin for the extrajudicial murder of a person of color. Okay, the charge is actually manslaughter, but still, it’s a Good Thing, considering that so few cops are ever charged, indicted, or found guilty if they almost miraculously had been. Pre-trial motions are underway, but you’d scarcely know it by the lack of coverage.

The grand jury indicted Charles Kleinert on May 12, ruling: “… that Kleinert:

Manslaughter is a second degree felony. If found guilty, Kleinert faces prison time of 2-20 years and a fine not to exceed $10,000. More on that strangely worded indictment later.

On July 26, police were investigating a robbery at the Benchmark Bank during business hours. When Larry Eugene Jackson, Jr. tried to enter the bank, he discovered the doors were locked. Dicktective Kleinert, smelling a rat, fled after the pre-suspect, but falling behind, he commandeered a citizen’s car in the process. Under a nearby bridge, Jackson and Kleinert struggled, and according to SocialistWorker.org, Kleinert:

‘pursued Jackson and beat him, breaking his ribs and perforating his colon. He then placed his gun to the back of Larry’s neck and pulled the trigger.

Larry was supposed to return home that day in order to take his three visiting children back to their mother in Mississippi. Instead, Larry’s mother Billie Mercer filed a missing person’s report with the Austin Police Department. Despite the police knowing full well that they had killed her son, they made her wait over a day before informing her, so they could get their stories straight and come up with a narrative to frame Larry as a criminal.’ 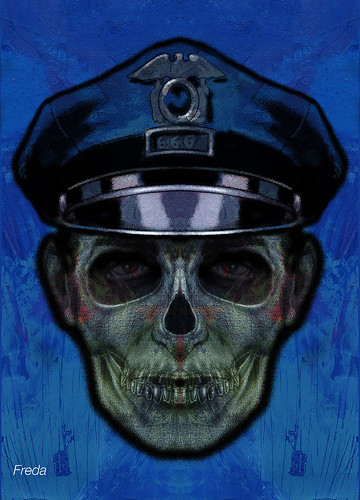 Kleinert turned himself in to the police the day of his indictment, where his bail was set at $100,000; he paid his own bond.

Soon after ‘the shooting’, Kleinert had quit the department, thereby insuring that his employment records would be sealed, and no action could be taken by the Austin police review board, and enabling him to ‘retire’ with full pension compensation. The American-Statesman did say that nothing they’d found in their records search found anything but glowing reports of Kleinert’s police work.

Now we don’t know what evidence the grand jury heard, including Kleinert’s, but in another piece from the Statesman:

‘Sources have told the Statesman that Kleinert told internal affairs investigators that he unintentionally fired the shot that killed Jackson. His weapon was drawn as part of his effort to subdue Jackson, according to sources, and Kleinert said a single round accidentally went off when he lost his balance and fell over.’

By fall of 2013, Larry Jackson’s family had filed a wrongful death claim in federal court. From AUSTIN (KXAN):

‘The Austin city council voted and approved a $1.25 million settlement with the family of a man who was shot and killed by Austin Police officer in July 2013.

This particular settlement is for Jackson’s three children. There is still a pending lawsuit filed by Jackson’s parents.

“We believe a monitory (sic) settlement for these young children who have lost their father through no fault of their own is the best path forward,” said Mayor Pro Tem Sheryl Cole before city council voted 6-to-1 to settle the lawsuit. Mayor Lee Leffingwell voted against it.

Good; not that money brings their father back to the life of which he and they were so callously deprived.

Now what might have caused the Austin DA to take this Killer Kop’s case to the grand jury? Perhaps community pressure, but perhaps this bit of history via the Socialist Worker was part of it, saying that:

Following that the journalist told the story of District Attorney Rosemary Lehmberg having been arrested for drinking and driving in April, 2013, and that afterward, APD Chief Acevedo and other political forces seemed to distance themselves from poor Rosemary. Although asked to resign by a few of those APA ‘forces’, she refused, and perhaps bringing Kleinert for indictment was a bit of a raspberry toward law enforcement, or perhaps she wanted just to end her career in someone’s good graces. We won’t likely ever know.

But rest assured that Austin’s citizens are in good hands:

‘Mayor Lee Leffingwell cautioned that incidents like the fatal shooting could happen in any city, “and do not reflect the ideals or nature of our city’s Police Department.”

“Austin is thankful to have one of the best police forces in the country,” he said in a statement. “One that tirelessly works to ensure that our community and city remain safe.”

But just in case, The People’s Task Force Tx is on the case; their Facebook page is here.

Meanwhile, in Albuquerque, citizens involved in holding police, the Mayor, and City Council accountable for the 26 murders by police since 2012 are figuratively up in arms over the City holding the NRA’s shooting competitions there. Competing for APD is a cop who killed unarmed people. Events in ABQ really deserve their own post, but you can watch yesterday’s press conference by citizens (including FDL’s Barbara Grothus, goddess love her) protesting the September even here on youtube. David Correia pointed out that the Killer Cop competition will be held on the anniversary of mentally ill James’ Boyd’s execution last year. Correia also retweeted this new ‘national anthem’:

In the wake of #Ferguson, a ‘New National Anthem' by TIofficial featuring Skylar Grey https://t.co/HkaFUySky2