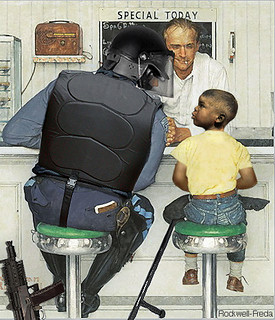 The world is burning and bleeding, both literally and figuratively, and there’s no place to hide, at least for us. Bloody wars, bloodthirsty rapacious greedy guts capitalists run the table with impunity…cops are killing our brothers and sisters in staggering numbers…some say three a day since Michael Brown’s life was snuffed out on August 9. How will it end if we don’t bring enough pressure on our rulers to end it? It won’t, of course. The almost total lack of trials or guilty verdicts tells the next cop that he or she will get away with their crimes. Yes, police departments are paying out plenty of wrongful death awards, but it’s of small concern to them.

‘Military defense’ and ‘Serve and Protect’ are hideous oxymorons, and both will lead us to our doom unless we can manage to turn the page, and create a more just and better world. Can we? Will we? The world is careening out of control, isn’t it?

Bless all the folks at #NoToNato in Cardiff, and we wish them well. Bless all those who have protested Killer Kops so diligently and courageously. But in order to make any great strides in stopping the killing, we need information on the cases, in other words, a true nationwide data base. From there we can follow cases as to charges filed, indictments or not, plea deals, trials when they miraculously happen, and of course: verdicts.

Recently I’d come across notifications on Twitter that efforts are underway to crowd-source killings by cops, especially in light of the fact that the FBI/DOJ’s count of ‘400 between 2003-2009, most all justifiable’ was criminally Pffffft. ‘No one has ever given us the funds to create a database, so it’s all done voluntarily,’ they whine. Well, in another case of apparent de facto ‘optional law’, it turns out that we should all take note of Techdirt.com’s ‘Federal Law Ordering US Attorney General To Gather Data On Police Excessive Force Has Been Ignored For 20 Years’.

‘One of the reasons we don’t have data on police use of excessive force is because compiling this information relies on law enforcement agencies being forthcoming about these incidents. Generally speaking, it takes FOIA requests and lawsuits to obtain any data gathered by individual police departments. This shouldn’t be the case. In fact, as AllGov reports, this lack of data violates a federal law.

In 1994, Congress passed the Violent Crime Control and Law Enforcement Act. Among its provisions was the order that “the Attorney General shall, through appropriate means, acquire data about the use of excessive force by law enforcement officers.” The Justice Department was also required to publish an annual report on the data collected.

And…that’s pretty much the last anyone heard of that. The work of collecting the data was shuffled off to the International Association for Chiefs of Police, which made a few efforts at collecting data and put together a report in 2001, but has produced nothing since.

Unsurprisingly, law enforcement agencies don’t want to talk about it, and the entity in charge of compiling the data seems entirely uninterested in doing the job. Even if the data was collected as the statute requires, much of it would still be questionable. For one, it relies on self-reporting by entities that see zero benefit in exposing their officers’ wrongdoing. For another, excessive force incidents previously recorded may turn out to be “justified” later, either by internal investigations or via the judicial system.’ (my bold)

All of which leads us to believe that it’s down to the citizenry to make the counts, construct the data bases. The man who seems to have been at the task the longest published his ‘What I’ve Learned from Two Years Collecting Data on Police Killings’at Gawker.com; meet D. Brian Burghart:

Fatal Encounters on CNN: http://t.co/KNBz1bUKPk I would have liked my face to work right, but the Bell's Palsy said no. #fatalencounters

His site is Fatal encounters with Police.org; (this is his Twitter account). This is his ‘Why FE exists’, which explains how he chose this missio. The Tools page shows databases, how to make request submissions for data, uploading, and their spreadsheet. ‘How to help’ is on another tab. Here is his race map, the major caveat being:

‘This top map shows the fatal encounters that have made it to the database indicating race. Too often journalists don’t include the race of the person killed by police because it’s considered unethical to report it unless it’s germane to the report. Race is always germane in matters of use of deadly force’ Sigh; yes it is.

But the most complete website is on Facebook: ‘Killed by Police’, and the anonymous proprietor of the site has tallied 1496 corporate news reports of people killed by police in the US since May 1, 2013. He doesn’t differentiate whether cops were on or off duty, doesn’t consider whether the killings may have been ‘justifiable’ or not, he just collects the reports, which he admits is by no means comprehensive. Does it matter if they are on duty if they kill someone? I’ve been having a discussion with a friend about that (he says ‘Not one jot’), and considering that they’re trained to be thugs, maybe it doesn’t. Do they believe they’ll still be immune from prosecution? Possibly; although in the instance fivethirtyeight.com referenced, the cop IS being prosecuted.

But additionally, Reuben Fischer-Baum and Al Johri at fivethirtyeight.com have joined the search to create a more complete picture, and have created a spread sheet of 1439 of the killings so far. They explain a few of the limits in the compilation, the great value, and analyzed 146 of the links, some of which aren’t available to all of us due to Facebook filters or some such. Then they did the math, and found that:

‘By the narrowest measure possible — in which we give police every benefit of the “cause of death” doubt in incidents where they Tasered or restrained suspects – 85 percent of the sampled incidents were the sort of police killings the government might be expected to keep track of. If we include other arrest-related deaths (and they’re included in Bureau of Justice figures), then 93 percent of incidents qualified as police killings.

Applying these percentages to the total count at Killed By Police would imply that officers acting in the line of duty have killed in the neighborhood of 1,250 to 1,350 people since May 1, 2013. That’s about 1,000 deaths per year.’

It’s not clear to me if all these deaths by cop are being shared or not, but I do hope so, and that they can cross-check for submission duplications..

‘Stop Police Brutality, Repression and the Criminalization of a Generation has been mobilizing every year since 1996 for a National Day of Protest on October 22, bringing together those under the gun and those not under the gun as a powerful voice to expose the epidemic of police brutality.

The Coalition also works on the Stolen Lives Project, which documents cases of killings by law enforcement nationwide. The second edition of the Stolen Lives book documents over 2000 cases in the 1990s alone. Volunteers are needed to help with the research and editing of cases since then. Please contact oct22national@gmail.com for more information.’

The front page lists contacts for actions on Oct. 22; this is the Stolen Lives Facebook page.

Being particularly incensed by the abuse of Tasers, especially as the makers and police claim they are ‘non-lethal alternative to shootings’, ElectronicVillage would provide current data to fuel my rage before writing about them. 564 Taser-related deaths in the US since 2001, they say, related meaning either there were demonstrable underlying health problems causing the 50,000 volts per shot to aid in stopping their hearts, or coroners would rule that to be the case, because law enforcement, critics have claimed.

How mind-boggling is it that there have been so many needless shootings by now that we hear the calls now, “Why didn’t they use a Taser?”?

I’m sure you know what’s at stake here, not only for black, Hispanic, homeless, mentally ill and other citizens that have been mown down so cavalierly, but without constant pushback, it will not just continue apace, but increase as time goes on. You or those you love might easily be the next targets. As in: the sun won’t shine on our side of town, either.

A flash from the past as a reminder:

"Down with Police Terror" A protest sign from a march during the Great Depression, circa 1930 pic.twitter.com/Ihr7kVXvdV

Hard stories I found along the way this week:

‘Unprovoked and without cause, the deputies grabbed [the boy], choked him around the neck and threw him to the ground,” the lawsuit claimed, according to the Huffington Post. The young boy, who was without his shirt, allegedly “suffered bruising, choke marks, scrapes and cuts across his body,” the report read.

The boy had to receive treatment for his injuries, but the officers reported the incident as “assault of a law enforcement officer third degree” and “resisting/interfering with arrest, detention or stop.’

Bloomfield, NM: Father of four gunned down on his own driveway by police who claim he had a gun and was suicidal… but his wife says they are lying he was just having a ‘family squabble’ and was NOT armed

RIP John Rogers. A candlelight vigil was held asking for justice in his name.

Would you help? Would I?

From Nat Turner, poet laureate of Black Agenda Report, part of his ‘Justice Is Served’: