SCOTUS and High Court Decisions on Jim Crow Voting Restrictions: the Good and the Terrible

First, the good news: FDL denizen nonquixote alerted me this morning that the Supreme Court has shot down Wisconsin’s photo ID voting requirement. Bad news: the Journal-Sentinel article he sent quotes Attorney General J.B. Van Hollen as saying he will seek ways to reinstate the law within the month. He and Walker are the Snidely Whiplash Twins of Wisconsin politics.

‘Over a mild protest by three Justices, the Supreme Court on Thursday night barred Wisconsin from enforcing a requirement that voters must produce a photo identification before voting, by absentee ballot or in person. The Court majority’s one-paragraph order gave no reason, but the fact that this year’s election is less than a month away may have been the key factor.

The Wisconsin law, challenged by civil rights and citizens’ advocacy groups, was described by them as “one of the strictest voter ID laws in the country.” It would require voters to show one of only nine specific forms of identification to cast a ballot. Apparently, thousands of Wisconsin voters have already cast ballots without producing the kind of ID required, and tens of thousands reportedly do not have the right kind of ID. November 4 is the general election day this year.

The Court’s order was unsigned, but apparently had the votes of at least five Justices, since that would have been the minimum necessary to set aside a lower court’s order.’

More good news: An update at ScotusBlog brings news that a Federal District Court Judge in Corpus Christie has struck down a Texas Voter ID law that had been challenged by the Obama administration and civil rights and voting rights groups (one good thing this administration had done, even if rather self-serving; who’s to say?).

‘U.S. District Judge Nelva Gonzales Ramos found that Texas had intentionally discriminated against black and Hispanic voters in adopting the law. The judge next plans to move on to the challengers’ request that Texas be ordered to come to court to get clearance for any new voting law it enacts — a seldom-used power open to the judge under the Voting Rights Act of 1965’s Section 3(c). Even under the decision on Thursday, the judge said, Texas would have to get permission for any remedy it attempts for the violation found in this ruling.’ 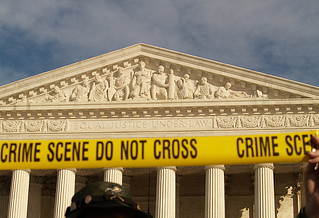 Yesterday I’d read at Al Jazeera that SCOTUS upheld the draconian rights restrictions in North Carolina that were obviously meant to disenfranchise the disabled, the working poor, and minorities, especially blacks.

‘An unspecified majority of the justices told North Carolina it can go ahead with ending same-day voter registration and prohibiting out-of-precinct voting.

The decision overturns last week’s ruling by the U.S. Fourth Circuit Court of Appeals, which said that ending those practices would discriminate against African-American voters, who had relied on them more heavily than whites. [snip]

In a dissenting opinion, Justice Ruth Bader Ginsburg, joined by Justice Sonia Sotomayor, argued that North Carolina’s restrictive new voting law would likely not have been allowed under the Voting Rights Act of 1965, had that bill not been gutted by the Supreme Court last year in Shelby County v. Holder. The dissenting justices noted, as had the lower court, that the Republican-controlled North Carolina legislature passed the omnibus bill the day after Shelby County ended its 48-year-old requirement to ask the federal government for permission to make such changes.’

Most of the coverage of the decision included the ‘unspecified majority’ language, but this morning I found (ahem) that McClatchy is reporting it was indeed a 7-2 decision, which means, of course, that Justices Breyer and Kagan voted with the majority, fook them very much. Kagan, you will recall, helped to begin to shred the long-standing Miranda Rule for arrestees’ constitutional protections.

According to Lyle Dennison at Scotusblog, other provisions in the new state law, not at issue in the state’s plea to the Supreme Court, required identification to vote, cut short early voting by a week, barred voting on the final Saturday before election day, ended pre-registration of sixteen- and seventeen-year-olds in high schools, and authorized any registered voter to challenge ballots cast early or on election day. Pffftt.

With just sixteen hours before polling stations were to open in Ohio, the Supreme Court on Monday afternoon blocked voters from beginning tomorrow to cast their ballots in this year’s general election. By a vote of five to four, the Justices put on hold a federal judge’s order providing new opportunities for voting before election day, beyond what state leaders wanted.

The order will remain in effect until the Court acts on an appeal by state officials. If that is denied, then the order lapses. It is unclear when that scenario will unfold. The state’s petition has not yet been filed formally.

The practical effect of the order will mean that, at the least, early voting will not be allowed this week — a period that supporters of early balloting have called “Golden Week.” That permits voters to register and cast their ballots on the same day.

Depending upon the timing of the state’s filing of a petition for review and the Court’s action on it, Monday’s order may also mean that early voting will not be permitted on most Sundays between now and election day, November 4, and will not be permitted during evening hours — that is, after 5 p.m.

Early voting during “Golden Week,” on Sundays, and in evening hours are the opportunities that civil rights groups have said are most important to black and low-income voters and the homeless. State officials, however, contended that those arrangements would raise the risk of voter fraud, and would cost too much for county election boards to implement.

Never mind that ‘voter fraud’ has largely been disprove as a myth.

For the legal beagles among you, Selby County was quite the landmark case, and its decisions will be discussed in mot of the appeals of voting rights disenfranchisement cases in the future, as has already begun. There are a lot of sections in it, including several, iirc, that deal with the limitations of the original Voting Rights Act ‘federal preclearance of laws’ provisions and re-authorizations, if I have it right; but more as well.

From the Lawyers’ Committee for Civil Rights on Shelby Co. v. Holder:

‘In April 2010, Shelby County, Alabama (a largely white suburb of Birmingham) filed suit in federal court in Washington, DC asking that Section 5 of the 1965 Voting Rights Act be declared unconstitutional. Shelby County, Alabama v. Holder, No. 1:10-cv-00651 (D.D.C.). The county asserts that Congress exceeded its constitutional authority when, in 2006, it reauthorized Section 5 for another 25 years. On June 25, 2013, the Supreme Court ruled that the coverage formula reauthorized by Congress is unconstitutional.

Section 5 requires that certain States and localities, located primarily in the South and Southwest, obtain federal preclearance for all voting changes before they may be implemented. To obtain preclearance, a jurisdiction must demonstrate that the change neither has a discriminatory purpose nor a discriminatory effect.’ [snip]

In its 5-4 decision, the Supreme Court held that Section 4 of the Voting Rights Act, which establishes the formula that determines which jurisdictions must comply with Section 5 preclearance, is unconstitutional and can no longer be used. In the majority opinion, Chief Justice Roberts writes, “We issue no holding on [Section] 5 itself, only on the coverage formula. Congress may draft another formula based on current conditions.“

With the help of the Lawyers’ Committee for Civil Rights and other civil rights group, Congress has seemingly reauthorized it every five years, so the discussion must have split some fine legal hairs, but I can’t claim to understand much of it.

Whether or not one chooses to vote, or to vote only on ballot initiatives, local races, and not for federal races, people should not be robbed of their voting rights for any reason, much less this sort of partisan/classist bullshit. If those of us of conscience and principles can keep applying leverage to create a better and just world… (Playing for Change, live at Folsom)”

25 responses to “SCOTUS and High Court Decisions on Jim Crow Voting Restrictions: the Good and the Terrible”