You may already know that this was this Eric Holder story Matt Taibbi was about to publish at his new magazine ‘The Racket’, part of Pierre Omidyar’s ‘First Look’ transformational and fierce investigative journalism’ quarter-of-a-billion dollar venture. If you didn’t know that he and Pierre parted ways a few days ago, here is The Intercept’s ‘Inside Story’ about it. Make of it what you will, of course; Yves Smith asked some very pertinent questions about ‘the slugfet’, imo. The rest of the interview is here, as is the transcript. (Sorry; this is all that’s up on youtube.)

A few comments about the interview: One is that Matt obviously muzzled himself when Amy asked about why he left Pierre’s Place. One wonders if he (highly likely) had signed a confidentiality agreement, and considers that Pierre’s legal team could tie him up in court forever after if he were to go public with anything, and might mean we’ll never hear his side of ‘the story’. But his RS exposé does mention Fleichman’s agreement with Chase which she bravely, if nervously, skated by in the interview:

‘Thanks to a confidentiality agreement, she’s kept her mouth shut since then. “My closest family and friends don’t know what I’ve been living with,” she says. “Even my brother will only find out for the first time when he sees this interview.”‘

Taibbi, while condemning Obama for so much of this, failed to mention that Obama had also claimed that he would enact meaningful financial reform, but tanked every meaningful bit, and we ended up with the absurd Dodd-Frank. Oh yes, his Angelides Commission lasted three days or something, not much like the post-1929 crash 1932 Pecora Commission two-year probe, was it? Included was testimony by J.P. Morgan, Jr., and out of which came Glass-Steagal and the Securities Exchange Act of 1934.

I will credit Obama with one thing, though: it was his machinations tanking financial regulations and his DoJ’s failure to put Fraudsters in prison that caused me to understand that US capitalism will never be reigned in again, and must be destroyed. Many say that even Marx never imagined the degree of capitalistic corruption that now rules the land…with utter impunity. Fines? Pffft.
Remember when folks were giddy about Eric Schneiderman, ‘the New Sheriff of Wall Street’ being elected in 2010? Woo-hoo! Fight for the little guy! Fight for Justice (and the American way, which sadly…he did). Small wonder that billionaire hedge funders gave to his recent winning campaign…

Oopsie: Breaking trial balloon: ‘President Obama expected to nominate Loretta Lynch as Attorney General’. Guess we’ll see what the Republican in the Senate have to say about it, but more about Lynch below. Gosh, and here I figured he might name Jeh Johnson, who was said to be on ‘the short list’.

Other Fraud Enablement by the DoJ

All of this reminded me, as well, of then head of the DoJ’s Criminal Prosecution Division Lanny Breuer’s ‘Deferred Prosecutions’, a meme that is so absurd that it was hard not to crow with laughter when we heard his weasel words. From my post waaay back in September 2012, and all of it relates to ‘Too Big to Fail’ as cynical cover for ‘Too Big to Jail’, heeeeeere’s Lanny speaking:

‘“One of the reasons why deferred prosecution agreements are such a powerful tool is that, in many ways, a DPA has the same punitive, deterrent, and rehabilitative effect as a guilty plea: when a company enters into a DPA with the government, or an NPA for that matter, it almost always must acknowledge wrongdoing, agree to cooperate with the government’s investigation, pay a fine, agree to improve its compliance program, and agree to face prosecution if it fails to satisfy the terms of the agreement. All of these components of DPAs are critical for accountability.

[snip; my bolds, and it’s the justification in a nutshell]:

“To be clear, the decision of whether to indict a corporation, defer prosecution, or decline altogether is not one that I, or anyone in the Criminal Division, take lightly. We are frequently on the receiving end of presentations from defense counsel, CEOs, and economists who argue that the collateral consequences of an indictment would be devastating for their client. In my conference room, over the years, I have heard sober predictions that a company or bank might fail if we indict, that innocent employees could lose their jobs, that entire industries may be affected, and even that global markets will feel the effects. Sometimes – though, let me stress, not always – these presentations are compelling”

Seriously; ya couldn’t make up that stuff if ya tried. Breuer prosecuted whistleblower Thomas Drake, ran the jaw-dropping Fast and Furious program, was let go in 2012, and is…back at a comfy job at Covington & Burling.

Yves Smith at Naked Capitalism jumped right on Taibbi’s ‘The $9 Billion Witness: Meet JPMorgan Chase’s Worst Nightmare’ overnight, and allow me to clip in a few salient facts, names and banks from Matt’s barn-burner. First, regarding Greenpoint that Fleischman spoke about:

“The centerpiece of the story is a package of particularly noxious mortgages from an originator called Greenpoint. Their age alone made them suspect: they were unsecuritized after seven plus months, which meant they’d either already defaulted or had been rejected by another securitizer. One sample had 40% had overstated incomes, and 33% had incomes that were simply not plausible given the supposed employment of the borrower.

Fleischmann jumped ranks and spoke to a JP Morgan managing director, Greg Boester, and told him that selling these loans into securities would amount to fraud. Fleischmann was ignored. Boester is now at JP Morgan, after doing a brief stint at Citadel.’

From Taibbi, the smoking gun:

‘A few weeks later, in early 2007, she sent a long letter to another managing director, William Buell. In the letter, she warned Buell of the consequences of reselling these bad loans as securities and gave detailed descriptions of breakdowns in Chase’s diligence process.

Fleischmann assumed this letter, which Chase lawyers would later jokingly nickname “The Howler” after the screaming missive from the Harry Potter books, would be enough to force the bank to stop selling the bad loans.’

In October 2013, one of those investors – the Fort Worth Employees’ Retirement Fund – asked a federal judge to force Chase to grant access to a series of current and former employees, including Fleischmann, whose status as a key cooperator in the federal investigation had made headlines….

In response, Dorothy Spenner, an attorney representing Chase, told the court that Fleischmann was not a “relevant custodian.” In other words, she couldn’t testify to anything of importance. Federal Magistrate Judge James C. Francis IV took Chase’s lawyers at their word and rejected the Fort Worth retirees’ request for access to Fleischmann and her evidence.

Other investors bilked by Chase also tried to speak to Fleischmann. The Federal Home Loan Bank of Pittsburgh, which had sued Chase, asked the court to force Chase to turn over a copy of the draft civil complaint that was withheld after Holder’s scuttled press conference. The Pittsburgh litigants also specified that they wanted access to the name of the state’s cooperating witness: namely, Fleischmann.

In that case, the judge actually ordered Chase to turn over both the complaint and Fleischmann’s name. Chase stalled. Later in the fall, the judge ordered the bank to produce the information again; it stalled some more.

Then, in January 2014, Chase suddenly settled with the Pittsburgh bank out of court for an undisclosed amount. Months after being ordered to allow Fleischmann to talk, they once again paid a stiff price to keep her testimony out of the public eye.’

Yves again, and right on the money, so to speak:

‘This story alone show that the claim that Obama and Holder made, that there was bad conduct in the mortgage market, but it didn’t rise to the level of criminal activity, is almost certainly a lie. Pretty much anyone familiar with the subprime market knew that, but now we have evidence that the government had concrete, powerful evidence plus a credible witness and chose to let a powerful bank off. The fact that the bank continued to engage in fraud after getting two warnings to senior managers, one in writing, would seem to rise to the level of criminality.’

Well, you remember those fine weasel words don’t you? She also points out that the case hasn’t been *officially closed*, given that Holder is busy doing his exit happy-dances everywhere he can, the next AG ain’t likely to bring it up again.  So just to be clear:

Seemingly not wanting to deal with even the possibility of such a thing happening, Holder blew off the idea of showing the settlement to a judge. The settlement, says Kelleher, “was unprecedented in many ways, including being very carefully crafted to bypass the court system.  . . . There can be little doubt that the DOJ and JP-Morgan were trying to avoid disclosure of their dirty deeds and prevent public scrutiny of their sweetheart deal.” Kelleher asks a rhetorical question: “Can you imagine the outcry if [Bush-era Attorney General] Alberto Gonzales had gone into the backroom and given Halliburton immunity in exchange for a billion dollars?”

A number of the Naked Capitalism commentariat on Yves’ thread asked if this story were why Pierre and Taibbi had split the sheet so heatedly. Given that Pierre’s PayPal company had blockaded WikiLeaks from receiving contributions for their publishing efforts, not to mention lying about it, you might understand that Julian Assange is not a friend of Pierre’s. So it was no surprise to see him reTweet this:

Yes, Schadenfreude is indeed one of my worst traits….

My memory told me that it was JP Morgan that invented the first credit default swaps; this article via Think Progress says it was all about the Exxon Valdez, and how very well it all worked out…for Exxon. On Frontline’s ‘Money, Power, and Wall Street’, Blythe Masters spoke of how their ‘financial innovation’ of mortgage-backed securities spread the risk and made them billions. The transcript of her interviews are here. Masters talked about the same meeting in Boca that the previous link did.

From yahoonews.com (she looks a bit like Al Sharpton, no?):

‘Lynch, who grew up in North Carolina and attended Harvard University for college and law school, has chaired the attorney general’s advisory committee since the beginning of 2013. She served previously at the Justice Department, starting as a drug and violent crime prosecutor at the U.S. Attorney’s office in 1990. She also previously headed the office in Brooklyn between 1999 and 2001, when she left for private practice at the law firm Hogan & Hartson (now Hogan Lovells) and then served as a board member of the Federal Reserve Bank of New York.’

But good on Alayne Fleishman, and Matt Taibbi as well. We hope Alayne is not treated as viciously as most whistleblowers are. 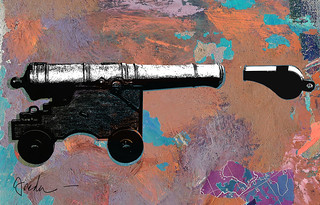 ‘The Lilliputians look upon fraud as a greater crime than theft. For, they allege, care and vigilance, with a very common understanding, can protect a man’s goods from thieves, but honesty hath no fence against superior cunning. . . where fraud is permitted or connived at, or hath no law to punish it, the honest dealer is always undone, and the knave gets the advantage.’

10 responses to “‘The Nine Billion Dollar Witness’ from Matt Taibbi”