Updated from ‘Unofficial’ via SILive:

Mayor Bill de Blasio said the grand jury’s decision not to indict a police officer in the chokehold death of Eric Garner was an outcome many New Yorkers did not want, but asked for any protests to be peaceful.

“Today’s outcome is one that many in our city did not want,” de Blasio said in a statement. “Yet New York City owns a proud and powerful tradition of expressing ourselves through non-violent protest. We trust that those unhappy with today’s grand jury decision will make their views known in the same peaceful, constructive way.” 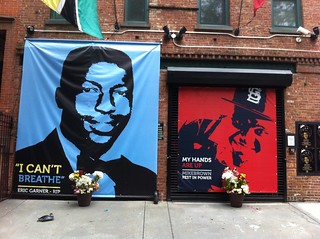 And yes. the news is everywhere. Those sources being… multiple law enforcement sources who had asked to be notified of the decision at least four hours before the announcement. Now the New York Post had claimed that the announcement may have come tomorrow instead of today because: Rockefeller Center Christmas tree lightning ceremony. Remember, #Black Lives Matter.

‘The panel voted “no bill” and declined to file charges against Pantaleo.

Officials have yet to make an officials announcement.

The panel sat for more than two months hearing evidence in the high-profile case.

Garner, a 43-year-old father of six from Port Richmond, died of a police chokehold July 17 in Tompkinsville The city’s medical examiner ruled Garner’s death a homicide caused by a chokehold.

Pantaleo can be seen in a video placing Garner in the maneuver while trying to arrest him for allegedly selling untaxed cigarettes. [snip]

Witnesses say Garner was trying to break up a fight in front of a beauty supply store on the corner of Bay and Victory. Garner, who was taller than 6 feet and weighed at least 350 pounds, was a fixture in the neighborhood who often sold loose cigarettes for 50 cents each.

The incident sparked calls of police brutality as residents hung handwritten posters with phrases like “no justice, no peace” and “Another innocent black man has been killed by police brutality. The NYPD must be stopped!” on telephone poles near the scene about an hour after the incident.

One witness, Valencia Griffin, said she saw two men fighting outside of the beauty supply shop at 202 Bay St. in Tompkinsville. Garner, she said, tried to play peacemaker.

Eric Garner, 43, was pronounced dead, after a scuffle with police on Thursday evening.

“He [the victim] tried to break up the fight — the two guys fighting, they saw the cops coming and walked away,” Ms. Griffin said.

“All I kept hearing from him was, ‘I can’t breathe, I can’t breathe,'” Ms. Griffin said. “He never fought back — he didn’t know why they were arresting him.”

Officer Friendly Chokeholder Pantaleo, as well as Serve-and-Protect Police D’Amico, Craig Furlani, Christopher Maldonado, William Meems and Mark Ramos, were named as defendants in the notice of claim filed by the Garner family planning to sue the city and the NYPD for $75 million. My guess is that there will be a huge award to the family, which consists of his wife and six children. Cold comfort blood money, but at least they can make the city pay for its cop’s assassinations.

Following the fatal encounter, Police Commissioner Bill Bratton announced that every officer in the 35,000-member NYPD will undergo retraining.

For more discussion on the case, please see ‘Is the Cop Who Murdered Eric Garner About to Be No-Billed? You’ll see the video that would have made one think that an indictment would have been a slam dunk, and leaked eyewitness witness testimony that was damning to Officer Pantaleo.

Earlier today, after announcing a new body cam pilot program in six commands; officials swear they won’t teach them how to disable them:

‘Officer Daniel Pantaleo will likely be indicted if the grand jury finds intent to harm Eric Garner: expert: Finding that the officer was careless or that the arrest was bungled will not rise to the level of a crime. The grand jury needs to find malice, intent to hurt Mr. Garner or a gross disregard for his well-being in order to indict Pantaleo’ for hints and clues as to what the Grand Jurors likely heard.

From #ThisStopsToday all week, ‘Indictment or not, we’ll be hitting the streets to demand #JusticeforEricGarner and an end to broken windows policing.

A grand jury indictment doesn’t equal justice. In cases where a grand jury has indicted, the majority of time the officers are found not guilty at trial.’