Zapatistas Host World Festival of Resistance and Rebellion Against Capitalism 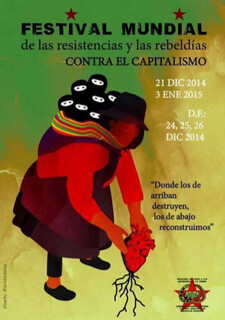 Given that all posts on RoarMagazine via Continental Cry are creative commons, rather than rewrite the descriptions of the Festival, I’ll use parts of Mr.Oikonomakis’s article, the joint invitation by the EZLN and National Indigenous Congress, and intersperse a few other Zaptista quotes, artwork, and background history of the Zapatista movement. Some of them I wrote along the way of my journey of discovery about these dedicated and courageous people of maize who realized in late 1993 that they truly were fighting for their lives, their historical ejido communal lands, their crops, and their honorable peasant culture. They finally said: Ya Basta! (Enough Aready!) and on the day that NAFTA took effect, staged a rebellion in Chiapas in which they took back some of their land that had been stolen by feudal lords, in order that they might create a better world for themselves and coming generations, one built on justice, equality, and freedom, by way of a bottom-upward horizontal and direct democracy.

(The Roar hyperlink seems to have mind of its own, and changes each time I click on it to check; here it is, hope it works)

“We have absolutely nothing to lose; no land, no work, poor health, no food, no education, no right to freely and democratically choose our leaders, no independence from foreign interests, and no justice for ourselves or our children. But we say enough is enough! We are the descendants of those who truly built this nation, we are the millions of dispossessed, and we call upon all of our brethren to join our crusade, the only option to avoid dying of starvation!”

The Festival was partly in commemoration 21st anniversary of their rebellion; partly to share with others what they’ve found that works, and what hasn’t, that they then adjust for further experimentation in aid of a healthy and whole community. They invite a cultural exchange, in which listening is as important as teaching, much like their theory of education: The teachers and students learn from each other. And yes, they believe that their model/s can scale up as needed.

In hopes that readers may understand my fascination with the tantalizing Zapatista movement as a model for ‘what’s next?’ after the capitalist Empire crashes under it’s own dead weight sooner or later (I believe it may be sooner given what’s been baked in since at least 2008, including the ‘bail-ins’ of soon to fail Big Banks written into the CR omnibus bill), I’m going to begin with Roar’s ending:

“First World Festival of Resistance and Rebellion Against Capitalism

It’s been a long time since the Zapatistas last organized a major international meeting like this one.

However, at a time when people all over the world — from the squares of Spain and Greece to Zucotti Park, Egypt, Tunisia, Turkey, Mexico and beyond — all turn their gaze towards Chiapas looking for an autonomous, direct democratic and horizontal system of self-governance from below, while the only alternative we are being offered back home is the same old parliamentary democracy, the Zapatistas respond by saying: “come and we’ll find our way together, without leaders and hierarchical structures.”

Maybe at the time when we need them the most, the Zapatistas (together with the National Indigenous Congress) invite the people of the world to Mexico once again — to meet, discuss, organize and decide the way forward towards our own emancipation. Just as the women and men of Chiapas have been doing for the past twenty years.

The programme of the Festival can be found here.”

It is the sound of their world collapsing.

It is that of ours rising anew.

The day that was the day, used to be night.

~ From the Mountains of the Mexican Southeast, (then) Subcomandante Marcos. 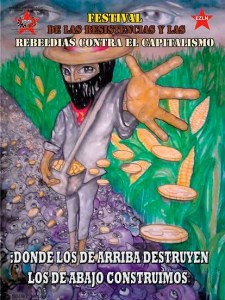 “They don’t say “how are you?” Instead, they prefer to ask “what does your heart say?” If you are well, you respond “jun ko’on” (my heart is united). If not, you have to respond that your heart is in pieces (“chkat ko’on”). And you have to be honest.

They are the tsotsiles Zapatistas of the Los Altos region and the Caracol II of Oventik, and they are getting ready to host the first World Festival of Resistance and Rebellion against Capitalism. The festival will take place between December 3 and January 3, and the main celebration (which will also be the commemoration of the Zapatista rebellion of January 1, 1994) will be hosted here in Oventik on December 31.”

The caracol II of Oventik, the caracol of “Resistance and Rebellion for Humanity” as the Zapatistas call it, lies in the mountainous region of Los Altos. This region is inhabited by indigenous Mayan people — Tsotsiles mostly, but a minority of Tseltales as well. The Oventik caracol is the one closest to the city of San Cristobal de las Casas, which probably also makes it the caracol most visited by the internacionales, the international compas who happen to visit Chiapas.”

(The caracols (snails) educational projects are described in the Roar article.) ‘“The wise ones of old say that the hearts of men and women have the form of a snail.”

“The Centro de Español y Lenguas Mayas Rebelde Autónomo Zapatista lies inside the caracol, and through its activities generates resources that are necessary for the sustainability of the primary and secondary schools. Here, people from all over the world who share the Zapatista principles of democracy, liberty and justice can come and learn Spanish or Tsotsil, living together with the other Zapatista students and promotores, and exchanging experiences, stories and songs. In other words, the enter is a meeting point of cultural exchange for all the people of the world.

They live together, study together, watch movies in the legendary Cine Pirata, and sometimes even sing together, sharing their music and culture with the international alumni of CELMRAZ. All this in a land where women would in the past be “exchanged” for cows in wedding arrangements, or where women were not allowed to choose their partners — they were chosen for them by their male family members.”

“The Story of the Sword” is an ancient parable that demonstrates how the indigenous peoples of Mexico can finally defeat the European invader. “The tree”, says Subcomandante Marcos when narrating the story, “tried to fight the sword, but was defeated. The stone likewise.” But not the water. “It follows its own road, it wraps itself around the sword and, without doing anything, it arrives at the river that will carry it to the great water where the greatest of gods cure themselves of thirst, those gods that birthed the world, the first ones.” 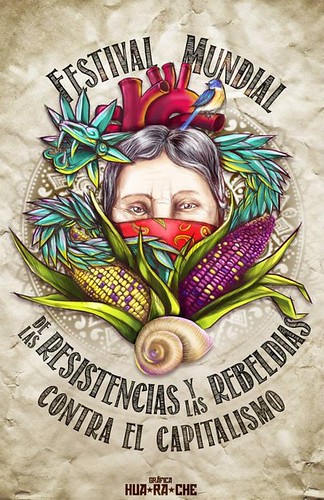 These rebellions and resistances are not just those of the indigenous peoples of Mexico. They are also found in the footsteps of the originary peoples across the continent and in all corners of the earth where individuals, groups, collectives, and organizations not only say “NO” to destruction, but go about constructing something new.

In this exchange, which we know has been possible largely due to the support of brothers and sisters of the National and International Sixth, we confirm that our mother earth, giver of all life on the planet, is in danger, and thus all of humanity is also. We see that it is neoliberal capitalism that has caused all of this pain, destruction, and death, and which has dispossessed, exploited, disrespected, and repressed us.

In defense of mother earth and in the struggle for humanity and against neoliberalism, no struggle is small.

Brothers and sisters of the National and International Sixth, we know that this savage and deathly capitalism is not invincible. We have learned this from the Zapatista experience and from the rebellions and resistances that bloom all over the planet whose pain is our pain, whose struggles are our struggles, and who dreams are our dreams. So we want to share with you the words, experiences, paths, and collective decision that a world where many worlds fit is possible. As we are concretizing the steps toward this dream, it is necessary to share with each other what we are thinking, to listen to each other in order to understand our struggles and our rebellions and learn from our forms of resistance.

The peoples, tribes, and nations assembled here have agreed to carry out, in cooperation with you, the “First World Festival of Resistances and Rebellions Against Capitalism” with the theme, “WHERE THOSE ABOVE DESTROY, WE BELOW REBUILD.”

‘They tried to bury us…

they didn’t know we were seeds’ 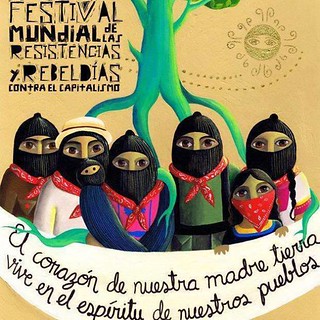 This is a bit of a primer on the movement I wrote some time back; please don’t let the title being about Israelis trying to help crush the Zapatistas dissuade you from reading. When thousands and thousands of Zapatistas came down from the highland jungles into the towns to mark the 20th anniversary of NAFTA, it gave me goosebumps, and still does today. That they ‘marched in silence so that they would be heard’ sent me over the top, and I wrote about it. Yes, they were heard indeed, and while there are still incidents of thugs murdering them, disappearing some of them, they are resilient. They also have the support of the vast majority of the Mexican people, and their numbers seem to be growing, not declining. It explains the ejido system created in 1930, and its cruel destruction, as well as noting Mexican revolutionary Emilio Zapata’s incessant cry: The land belongs to the people who work it!

This page has an overview and timeline of Zapatista Movement; this piece describes 15,000 of them pouring out of the highlands to ‘Join Latest Protests Over Disappeared Mexican Students’ (breathtaking art).

The website ‘Schools for Chiapas’ (Little Schools) is here; in the upper right hand corner is a button for their online store, featuring clothing, jewelry, posters, practical items for everyday use, Zapatista agricultural products, and more. If you have questions, the site administrator answers them jiggedy-quick.

You might also like “Practice First, Then Theory:” The Zapatista Little School Shares Lessons Learned During 19 Years of Self-Governance at warriorpublications.com.

On other threads some of us had been discussing the idea of community policing as a possible solution to disbanding existing PDs; wondering about how the Zapatistas have handled it, I found: Subcomandante Marcos Salutes the Community Police in Guerrero: Unpaid and Armed with Rifles, They Chased the Robbers and Rapists Out of Their Towns: “That is what must happen in this country!” I tried to find a version that wasn’t formatted so broadly; I found my eyes can’t quite read across the expanse; I hope you have better luck with it if you’re interested.

Himno Zapatista (you can read the lyrics here.)