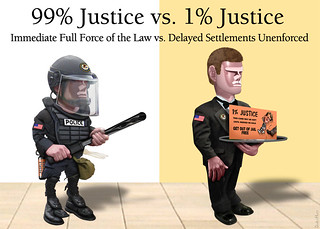 And now that you know the ending, allow me to tell you the story…

On Valentine’s Day, Feb. 14 Shane French of Cortez, CO, had a bit of a mental health meltdown, and was said by his mother to have been ‘yelling at the top of his lungs and flailing his arms about’. Apparently French had some mental health issues, and PTSD was mentioned along the way, but the newspaper accounts of the saga never mentioned the underlying causes.

His mother wanted help calming him down, so she did what many relatives are known to do in such cases: she died 911 for help. Soon the police showed up at their house on North Texas Street: six of them. According to court testimony, they busted through the front door, shoved James’ elderly mother and blind father out of the way, and crashed Mr. French to the ground in the space of about five seconds.

From there on accounts get fuzzier, of course. They apparently shot him full of taser darts that added up to total of 350,000 volts, twice before he was handcuffed, and five more times once he was cuffed and face down on the floor. Once he was ‘adequately subdued’, they carted him off to the city jail.

At his arraignment, his bail was set by Judge Todd Plewe at $300,000; yes, you heard it right. Not being able to post bond meant that French spent 297 days locked up before he was released. Following the story backwards in time as I did, I was shocked to discover that due to (ahem) imaginative police reports, French was initially to be charged with the attempted murder of Peace Officer Casey Eubanks; news coverage didn’t say what happened to that charge, but the judge must have thought that the evidence didn’t support it.

At that time, French was offered a plea deal in which he would serve twelve years in prison. Blessedly, he refused the ‘deal’.

Before I get into some of the defense’s pretrial motions and testimony at the trial, I want to tell you what the basis of his defense was; to me it was utterly brilliant of the two Public Defenders who handled his case:

They defended him under Colorado’s version of ‘Castle Law’ which is ‘Make My Day’.

This is Wikipedia’s short version explanation; (here is the long lexisnexis one):

‘Another term, the “Make My Day Law”, arose in the USA at the time of the 1985 Colorado statute that shielded people from any criminal/civil suits for using force – including deadly force – against an invader of the home. The law’s nickname is a reference to the line “Go ahead, make my day” uttered by actor Clint Eastwood’s character “Dirty Harry” Callahan (in the 1983 police film Sudden Impact).’

There have been other cases in which it’s been used as a defense against police intrusion, but I’m glad that PD’s Amy R. Smith and Heather Little either knew of them, or came up with the defense independently. At least it gives some small bit of redemption to the odious law.

On the afternoon of Dec. 2 after jury selection had been completed, according to the Cortez Journal:

‘Outside of the jury’s presence Tuesday afternoon, Public Defender Heather Little argued for sanctions against District Attorney Will Furse after it was discovered that evidence in the case had been lost by the Cortez Police Department. Plewe denied the motion, saying defense counsel could renew the motion if needed as the trial continued. [snip]

‘During the first of two afternoon recesses on Tuesday, Little requested a mistrial, citing the defense was never notified that police would testify that her client tried to bite several officers, as indicated by Furse in his opening remarks.

During opening remarks, assistant DA Margeson was quite lathered up, and claimed that French’s reactions to police were unreasonable, unjustified, and that he’d begun flailing his arms before stabbing Eubanks in the stomach with a kitchen knife. Never mind that neither the filet knife nor a paring knife that the police had confiscated as evidence showed no traces of blood whatsoever.

‘During her eight-minute opening, Little disputed the facts, telling jurors that her client was justified when trying to defend his blind father and elderly mother from excessive police force. She said Eubanks suffered a “small knick” to his belly that only required a Band-Aid.’

And what did Peace Officer Eubanks say about his ‘stabbing wound’ during cross-examination under oath during the trial?

He testified that he’d initially declined to seek medical attention for the ‘small laceration on his love-handle’, but was advised by a higher-up to go to the ER where they treated it with…a Band-aid. He then grinned. He also admitted that French never verbally threatened them or ‘brandished the knife’, and that it was the cops who were verbally abusive and physically abusive. His testimony that as he picked up Shane French in ‘a bear hug’, he felt a searing pain in his side’ was also corroborated by other unnamed witnesses.

The defense had brought in a former Pueblo County sheriff to testify that Peace Officer Boyd Nagle had used undue force and improper procedures with his repeated tasing of French. Under oath, he admitted breaking department protocol which calls for a warning, complete a form if warnings weren’t given, etc., and that they shouldn’t be used for punishment, only compliance. But he said, “I’ve never seen that form” and “he wasn’t complying”.

If you might be wondering why this case went to trial with those charges, I can’t blame you one iota. Did the cops simply lie in their reports, then tell at least some of the truth under oath? Were the DA and ADA to blame for ginning it all up for some reason? We’ll never know.

And yet during closing arguments, Deputy DA asked jurors “When is it okay to run at a police officer and stab him?” and maintained that Eubanks was met with violence as soon as he ‘encountered the defendant’, and noted what a miracle it was that his injury wasn’t (sic) more severe, as his radio must have taken the brunt of the blow.

The defense had shown photographs of the intense bruising French had sustained over a good portion of his body, apparently because ‘he wasn’t complying’.

“When is it OK to run at a police officer and stab him?” Margeson posed to jurors. “It’s your decision. The instructions tell you, ‘You make the call.’”

Margeson also said that Eubanks was intentionally met with deadly force as soon as he encountered the defendant, adding it was a “miracle” the officer didn’t suffer more serious injury. Margeson reminded jurors the officer’s radio took the blunt of the blow.

From the Journal again:

‘In a 32-minute closing statement that utilized a PowerPoint presentation with photographs, public defender Amy R. Smith said last week that her client was “beaten,” “tortured” and “insulted” by six “amped up” police officers. She said Eubanks’ vulgar remarks, including a statement that he should have shot the defendant, also shows that officers didn’t place any value on the defendant’s life.

“Mr. French is being blamed for it all,” Smith told jurors. “It doesn’t make sense.”

Smith further argued that her client’s actions were justified under Colorado’s Make My Day law – that French had the right to protect himself, his at-risk relatives and his home with deadly force – after the officers’ unlawful and unreasonable response to the 911 call. “He’s not guilty,” said Smith.

Smith also reminded jurors that only two of the six officers involved were called to testify for the prosecution and that both presented conflicting accounts on the stand and included “new details” they failed to document in their initial reports.
“The officers started this altercation,” said Smith. “They didn’t de-escalate the situation.”

After three and a half hours of deliberation, most of which would have been spent reading the reams of instructions provided to them by Judge Todd Plewe, they returned with the verdict: Not guilty on all counts.

Shane’s mother, Patty French sobbed uncontrollably in relief, and eventually said that the family may sue the police department. I sure hope they do, and that they win a huge award.

On the other hand, there is this egregious news: ‘MD Grand Jury Refuses Indictment Of Cop Who Killed Man With Down Syndrome Because He Wouldn’t Leave Movie’. For the price of a theatre ticket, ironically ‘Zero Dark Thirty’, three cops tased him, forced him to the floor (“only for one or two minutes, honest”), and asphyxiated the dear man; just look at his face. Would his last words have been, “I can’t breathe?”

And from Billings, Montana yesterday: ‘Jury Clears Montana Cop Who Fatally Shot Man For Not Putting Hands Up (Dashcam Video) You be the judge.

According to ‘Killed by Police on Facebook, there have been 1100 accounts on corporate media of people killed by police in 2014. But from #NativeLivesMatter on Twitter, we have to wonder if many Indigenous killings by police go unnoticed by corporate media, so don’t get counted: