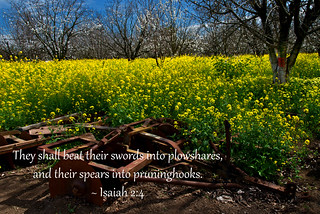 One hundred and eleven of the nun’s ‘roommates’ are living in degrading and inhumane circumstances as well. You may remember that she and her magnificent allies were sentenced in Feb. 2014 for their crimes of conscience; Megan to 35 months, her two allies to 62 months in prison. The over-zealous charges could have brought them each 30 years .

What was then 82 year old nun’s crime? And those of her two friends Michael Walli, 65, and Gregory Boertje-Obed, 58?

The three were sentenced on charges of interfering with national security and damaging property at the Y-12 National Security Complex in July 2012, the Oakridge, Tennessee facility that once provided the enriched uranium for the Hiroshima bomb. In order to bring attention to the dangers of nuclear war and increased proliferation, as well as how simple it looked to break into the grounds of the facility, these doughty senior citizens from Transform Plowshares Now were dropped off nearby, and hung banners on the steel fences, then proceeded to use bolt cutters to cut slits in the fence for access. Once inside, they threw a bit of human blood around, wrapped some pylons in yellow crime scene tape, and spray-painted Isaiah 2:4, ‘They shall beat swords into plowshares and their spears into pruning hooks’.

Their express intention was to get arrested, and they knew, and welcomed the fact, that they would go to prison for their crimes. They neither tripped alarms or met security guards as they walked about the grounds. This…at one of the largest storage sites of highly-enriched uranium are stored, in this case: 100,000 tons of it. A whale of a lot of conflagration power open to anyone with a will to get some for their own.

Eventually they grew restless at their failure to be apprehended, and began banging on metal buildings until a rent-a-cop arrived to arrest them.

O beautiful for pilgrim feet, Whose stern impassion’d stress
A thoroughfare for freedom beat…Across the wilderness!

In an exclusive interview with Linda Stasi of NYDailyNews.com, Stasi describes the Metropolitan Detention Center, which was designed originally to hold male prisoners until trial, not to hold women after conviction, reporting that the thousands of males incarcerated there are housed far more comfortably and humanely in comparison, and not in one giant dormitory from hell.

“Sister Megan’s “cell” is a gymnasium-size dorm unit with 60 bunkbeds for the 111 women, placed a few feet apart. Along one wall are six half-enclosed toilet stalls, six sinks and six shower stalls, and in the middle of the room, 10 dining/work/play tables that can seat 60 women. There is no outdoor courtyard and no mess hall, and food is passed on trays to the women individually through a small window. Little occupational or addiction therapy, no real shot at education other than a GED.

The women eat in the same unit in which they defecate, sleep, shower and wash.”

The good nun is scheduled to be released in November. The three are still mandated to pay a fine for ‘damages to the facility’ of nearly $53,000.

Given that her sentencing in early 2014 didn’t add up to being release at the end of this year, I did a bit of sleuthing to make sense of it. Unbeknownst to me at the time, I found this piece from December 16, 2013, meaning her sentence must have included time served from some time back. It’s an Al Jareerza interview with the good nun at the Irwin County Detention Center in Ocilla, GA that includes Sister Megan’s fascinating account of her evolution to radical peace and anti-nuclear-proliferation direct actionist. One might say that it was almost the family business. This section is inspirational, the Occupy solidarity unknown to me previously:

Rice doesn’t expect much from the establishment — not even from the new pope, whose recent pronouncements have raised many eyebrows. She isn’t interested in institutions but swears instead by a grass-roots church. “The church is where the people are,” she said. The church matters only “on a local level.” She is skeptical of Pope Francis but feels encouraged by his choice of a less extravagant lifestyle than those of his predecessors, who she said had been living like “princes in their palaces.”

Her order, the Society of the Holy Child Jesus, offered the lone voice of support from within the Catholic establishment.

“American Christians have been far too polite, too quiet and too accommodating of both the injustice and the blasphemous use of Jesus’ name in committing atrocities in our nation and our world,” wrote a group styling itself Protest Chaplains in a manifesto that coincided with the Occupy movement of which they formed a part. “That’s why we want to protest with all those who, like us, know in the deepest places of our souls that another world is indeed possible.”

Rice met with Occupy activists discussing nuclear issues in New York City, “when it began in September.” She described their work as “religion doing what it’s meant to be doing.”

“The church is where the people are,” she said. “It is the people.””

As she awaited final sentencing, she apparently quoted Martin Luther King in a letter she’d sent to A Jazeera, knowing that she might die in prison.

“And there comes a time when one must take a position that is neither safe nor politic nor popular, but one must do it because conscience tells one it is right.”

At a court hearing in May, she’d told the public prosecutor her only guilt is that she waited 70 years to break into the facility “to be able to speak what I knew in my conscience.” Seven months later she said, “This is a very positive experience. It’s getting better and better.” What a woman;  what a human being; my stars.

Do look at the photos on Stasi’s post if you have the time.

“…Sister Megan is incredibly serene despite the horrifying conditions that are impossible to comprehend in America in 2015. She says she’s content to live her life among the “beautiful women here who are my friends,” doing God’s work. The only thing she needs is a dental bridge so that she may once again have a front tooth.”

You can read more at Transform Plowshares Now’s website, including their messages from prison. This poem was written by Michael Walli:

“STOPPING BY THE U. S. CONSTITUTION ON A SNOWY EVENING”

by Michel Walli, with thanks to Robert Frost

Winter’s coming
When no one can sleep
Arise! Awake!
Forsake your sleep!

Below is one of the videos of her speaking post-2014 sentencing; there’s a lot of background noise, but her message rings like a bell. Bless her, and bless her comrades in peace and justice.

Like Loading...
This entry was posted in empire and war crimes, justice and justice denied. Bookmark the permalink.