The transcript is here, if watching even a few minutes of Obama speaking is just too much for you to bear.

Norman, welcome to Democracy Now! Can you talk about this latest effort by President Obama to get war authorization?

NORMAN SOLOMON: Well, unfortunately, in political terms, it represents a sort of repetition compulsion disorder, back to the future from an administration that came in saying it was going to dispense with the concept—or at least the phraseology—of a war on terror, an administration that even today, through the president’s statement, is again asserting that it’s against endless war, and yet both the statement from the president yesterday and the resolution—and, for that matter, the White House policy—is explicitly endless, perpetual war. And that’s the kind of policy we’re getting.

Our Partners in Peace:

From his internal link to Sarah Lazare, equally or more important:

“The most important question to ask is this: Do we really think that the U.S. military operation against ISIS will bring about a good outcome for the people of Iraq and Syria, or for U.S. society? Is there any evidence from the more than 13 years of the so-called “War on Terror” that U.S. military intervention in the Middle East brings anything but death, displacement, destabilization, and poverty to the people whose homes have been transformed into battlefields?

The answer to these questions must be a resounding “No.”

But there are also many things to say “Yes” to. A better path forward can only be forged by peoples’ movements on the ground in Iraq and Syria — movements that still exist, still matter, and continue to organize for workers’ rights, gender justice, war reparations, and people power, even amid the death and displacement that has swallowed up all the headlines.” 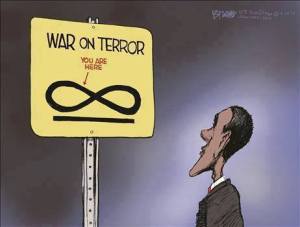