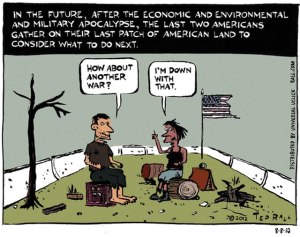 The last Open Menu can be found here, with 119 comments.

A few entries that I’d like to bring are:

Bill Bratton Jumps the Shark, Says He Needs More Cops to Fight ISIS, because the Magic Word ISIS brings home the bacon every time.  The video at the link shows anti-police brutality protestors engaging in civil disobedience at a recent Public ‘Safety’ meeting.  The chairperson finally cleared the council chambers when the NYC Police Chief made his pitch:

Ironically, given what the protesters had to say, the commissioner said he had finally concluded after a year-long study that the NYPD does need more cops. At 34,000, it’s down 6,000 from his pre-911 high.

“The Department will be seeking additional officers,” Bratton said.

It was a 180 for Bratton, who last year said he didn’t need more manpower when the Council wanted to add 1,000 new officers, Kramer reported.

The commissioner was non-committal about just how many he needs, but one thing he wants is 350 more officers to fight ISIS and other terror groups.

“This is intended to address the changing face of terrorism that changed dramatically in 2014. When I appeared before you last year, the threat was primarily from al Qaeda,” Bratton said. “Certainly the ISIS threat has morphed significantly over the last year.”

The multi-million dollar question is whether Mayor Bill de Blasio will put more cops in the budget and if so, how many?

The video shows exactly how a compromised, corporate-funded press is easy as pie to manipulate through fear.  Watch the scary ISIS footage, listen to the questions.  “How many are there you haven’t caught?!?”

Quite exquisitely related is Margaret Kimberly’s (BAR) Media Silence on Libya, including:

“The ISIS story has been dumbed down to tired analysis about a clash of civilizations and whether or not Islam is a religion of peace. Muslims can be peaceful or warlike but the hand of American involvement and the silence about it is the real story.

Therein lies the perennial problem. This is not the first time in history that an administration directed what the media does and doesn’t report. Journalists know that they have to play ball so to speak. If they want the good gig and access to senior officials they will write only what they are told to write. They won’t stray from the script or tell any inconvenient truths like the United States spending the last nearly forty years supporting jihadists who they later end up fighting.

When the next ISIS video of immolation or beheading is released, the history of American involvement ought to be told too. But no one should hold their breath and think that the press will report on any such thing.

Now remember that Bratton was chief in LA forever, cops as brutal as hell.  H e was made an ‘advisor’ in Oakland, and replaced Ray Kelly in New Yawk City.

“The department plans to sign the deal with Strategic Policy Partnerships to fulfill Bratton and Mayor Bill de Blasio’s mandate to fix community policing in the wake of the Eric Garner case.

The firm would help high-ranking officers mend community relations and enhance cadet training, among other tasks, according to a Dec. 19 notice in the City Record, the city’s official publication for procurements.

The consulting firm is run by Bratton friend Robert Wasserman. Bratton — who ran his own law enforcement consulting firm, the Bratton Group, before taking over the NYPD’s top job last January — raked in more than $53,000 while working with Wasserman on a contract with the Baltimore Police Department in 2013.”

“The city will shell out $4.5 million to hire a legal team to specifically fight “frivolous” lawsuits targeting cops, a spokesman for Mayor de Blasio said Friday.

The move came the day after The Post exclusively reported that city lawyers actually paid $5,000 to a thug who menaced cops with a machete rather take his outrageous lawsuit to court.”

So Bill Bratton erupted in rage when he read the story in the Post, and even had a bout of the Blue Flu that kept him from the day’s promotion ceremony.  Never willing to let a kerfuffle with Bratton go to waste when genuflection is in order, DeBlasio announced the new legal team.  But at the end of the article, it also says:

On Thursday, Bratton had said that an anti-terror Strategic Response Group, or SRG, would be devoted to “advanced disorder control and counterterrorism protection” — and its members would ride around in vehicles equipped with machine guns and riot gear.

But O’Neill said Friday that the special squad would only be handling terror-related activities, while a separate group will deal with protests.”

Under the category of Scary, media freakout themes is also: Iran is close to getting nukes!!!

And right on cue with the Senators (R’s, I believe) trying to derail nuke talks with that nation comes this from the Washington Post:  War with Iran is probably our best option by Joshua Muravchik, March 13

Joshua Muravchik is a fellow at the Foreign Policy Institute of Johns Hopkins University’s School of Advanced International Studies.

Endless lists of TINA, judging any deal a bad deal ahead of time, Iranians are sneaky bastards, ya know, but better than none) as per the sainted idiot Susan Rice, on and on…and ending with these gems:

“And finally, wouldn’t Iran retaliate by using its own forces or proxies to attack Americans — as it has done in Lebanon, Iraq and Saudi Arabia — with new ferocity? Probably. We could attempt to deter this by warning that we would respond by targeting other military and infrastructure facilities.

Nonetheless, we might absorb some strikes. Wrenchingly, that might be the price of averting the heavier losses that we and others would suffer in the larger Middle Eastern conflagration that is the likely outcome of Iran’s drive to the bomb. Were Iran, which is already embroiled in Iraq, Syria, Yemen, Lebanon and Gaza, further emboldened by becoming a “nuclear threshold state,” it would probably overreach, kindling bigger wars — with Israel, Arab states or both. The United States would probably be drawn in, just as we have been in many other wars from which we had hoped to remain aloof.Yes, there are risks to military action. But Iran’s nuclear program and vaunting ambitions have made the world a more dangerous place. Its achievement of a bomb would magnify that danger manyfold. Alas, sanctions and deals will not prevent this.”Who the hell are these people advocating War Everywhere? Bomb them into thinking OUR way, because we are Exceptional, moral, and resolute.Will Muravchick and his pals sign up to go fight for the Imperium?  Good god all-friday; they are all insane…batshit crazy, and should be committed to mental hospitals, not directing foreign policy via war-profiteering think tanks.  And boy, howdy, does he have the “unintended consequences” wrong, imo.From RT:  Mega drought: US southwest set for worst water shortage in 1,000 years.main-header,.page{display: none;} .chromeFrameOverlayContent{width: auto;}
// // // // // //
https://twitter.com/NOAA/status/576040218085756929https://www.youtube.com/watch?v=ToY4eeWsdLcRelated, and from 2014:  CALIFORNIA: Central Valley sinks as parched farms wring water from aquifers — Friday, January 3, 2014“FIREBAUGH, Calif. — A large swath of Central Valley is sinking as farms pump groundwater in the face of searing drought, sparking a scramble for solutions as forecasts show no end to dry conditions.
So says the U.S. Geological Survey, whose research shows land near the San Joaquin River sank by nearly a foot per year from 2008 to 2010, one of the most dramatic rates ever measured in the San Joaquin Valley.Using satellite imagery, scientists identified a sinking bowl that sprawls more than 1,200 square miles and includes five towns, part of the San Joaquin River and a network of canals used for irrigation and flood control. USGS had studied the area a half-century or so ago.”CA now has enacted laws regulating the drilling and use of sub-surface  water but the laws won’t really be put into actual effect for five more years.also from NOAA on twitter:https://twitter.com/NOAAClimate/status/576367152346763264
https://twitter.com/noaaocean/status/573870770801283072

This entry was posted in * OPEN MENUS. Bookmark the permalink.