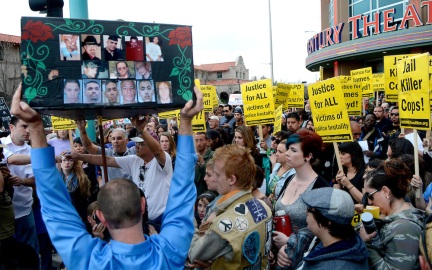 (Note: if you’re unable to see the Tweets in their entirety, hold down Control, press-, then +, and they should justify.)

Beginning last September, over a dozen members of a coalition of ABQ Justice and related organizations spent six months on the streets interviewing citizens most often brutalized by the APD. Those include: the homeless, Latinos/Latinas, and First Americans.  Forty-one people agreed to be interviewed; many others had been asked, but declined, stating fear of reprisal as the reasons. The culmination of the report was to be presented at a People’s Tribunal on March 12, close to the one year anniversary of the horrific assassination of homeless James Boyd by the APD in the Sandia foothills north-east off the city.  More than seventy people attended the tribunal in a makeshift room decorated with photos of the murdered, as well as related placards of slogans related to the ongoing movement.

While a coalition of social justice groups had been asking the Department of Justice to investigate the APD’s rampant civil rights abuses since 2010, it was James ‘Abba’ Boyd’s assassination that caused the anti-police brutality movement to take fire in earnest.  Their combined and dogged efforts predated the #BlackLivesMatter movement, and I couldn’t appreciate them more.  They have managed to stop the killings, at least for now.

The impetus behind the investigation and tribunal was that neither the Department of Justice’s 2014 investigation of the department, nor the DOJ’s consent decree, which found that the APD engages in patterns of unconstitutional excessive force, including deadly force, but failed to address any racial and class bias against marginalized (read: expendable, undesirable citizens) as key underlying factors, as in: an entire culture of 2-tiered policing.

The APD was put on trial by citizen jurists.

The jurists who sat on Saturday’s tribunal are dedicated activists who represent social justice organizations in New Mexico:
Francis Quintana, founding pastor of the Blessed Oscar Romero Catholic Community.
Margaux Lopez, organizer for ANSWER New Mexico and Women Organized to Resist & Defend.
Charles Powell, president of the Albuquerque chapter of Veterans for Peace.
Eleanor Chavez of the American Federation of Teachers and District 1 representative on the Public Education Commission.
Sally Ellis Thompson, co-founder of the Albuquerque chapter of Veterans for Peace, co-founder of the Albuquerque Center for Peace and Justice, and member of Raging Grannies.
Sam Gardipe, co-founder of the Red Nation, dedicated to the liberation of indigenous peoples.

From Kay Matthews at LaJicarita.com:

“David Correia, one of the organizers of the tribunal and a professor of American Studies at UNM, laid out how the six month study was conducted and summarized the findings that were subsequently presented to the tribunal: 1) APD systematically engages in racially motivated forms of policing targeting people of color, particularly Native Americans; 2) APD engages in violence against women, including sexual violence; and 3) APD specifically and routinely engages in harassment of homeless people.

None of these charges are new. As several speakers told the tribunal, there is a history of APD engaging in racist profiling and violence. Richard Moore, of Los Jardines Institute, talked about the longtime struggles of the Latino community in Albuquerque to address this violence: the Brown Berets, the Poor People’s Campaign, the Black Berets, student and youth groups, Southwest Organizing Project (SWOP), and the Southwest Network of Environmental and Economic Justice all organized to expose systemic violence in APD, which resulted in the murder of several Chicano activists.”

Matthews notes that in this video of retired APD officer Sam Costales, you will hear him make these chilling statements:

“It would take hours to describe the violence I’ve witnessed by my fellow officers.”

When asked about the validity of the claim that mot cops are good, but that a ‘few bad apples’ ruin the department, he said, “I absolutely disagree that most cops are good cops.”

Asked whether or not Hispanic cops are less likely to engage in profiling people of color, Costales responded, “Once they put on a uniform they’re all blue.”  We’ve heard it expressed that when a black person dons the police uniform, they’put on white skin along with it’.

Unfortunately, the sound quality in this video makes it hard to watch, but it does get a little better as time goes on.

First People’s Tribunal on Police Brutality Pt 2
(you may notice Barabra Grothus behind Diana Vargas, then speaking at about 16 minutes.)

This is the Scribd version of the report: ‘Targeted: Prejudice and Racial Bias in the Albuquerque Police Department’. This report summarizes the findings of a six-month investigation of racial bias and prejudice by the Albuquerque Police Department by ABQJustice and the ANSWER Coalition.  Given that it’s eighteen pages including the appendix, I’ll clip a few bits of major interest and outrage, most of which are included in the videos.

It includes this gasp-worthy chart:

Note that Since January, 2010, the Albuquerque Police Department (APD) has killed 28 people in 42 oﬃcer-involved shootings, “a per-capita kill rate nearly double that of the Chicago police and eight times that of the NYPD.”

This is the ﬁrst study to systematically acquire data by and about the people routinely victimized by APD, demonstrating that unconstitutional policing and unjustiﬁed use-force at APD is not only routine, but signiﬁcantly underreported. The street interviews, conducted by teams of ABQJustice investigators, conﬁrmed that:

Te ABQJustice investigation shows that the po-lice oversight agencies, in place from 1997 to the present, have failed to resolve the systemic problems at APD. ABQJustice believes this is because the authority of these agencies is limited to an advisory capacity.The solutions outlined in this report call for:

A number of the testimonies in red are extremely horrific, if expected.  I know we all thank these good people for their honest recounting of events.

A homeless Hispanic male in his 50s told investigators, “When a cop comes up to me I get scared. They always make an excuse. If I put my hand in my jacket to grab a cigarette butt, they say that I grabbed a gun.” He described constant harassment: “I can’t walk nowhere because they stop me. If I’m  just walking down the street they can’t just stop me and say ‘I want to see your ID;’ they say ‘I got prob-able cause to search you.’” He described an incident when he ran from police. He was unarmed. “Tey caught me. Tey took my jacket and put it over my head, kicked me in the head, split my head open. I had probably 38 staples in my head. They shattered every rib on my lef-hand side.”

A homeless White male in his 40s described harassment by APD oﬃcers that also included property destruction. When the interviewer asked whether local police had ever abused him, he explained, “Yeah, once the cops handcuﬀed me and made me watch them cut up my tent and sleeping bag with razor blades. They’re real bastards.” When the interviewer asked why APD did that, he responded, “Because they can. Because I’m homeless.”

Two homeless Native men and one homeless Native woman in their 40s described an APD attack on a friend, who is also homeless. According to all three, oﬃcers dragged their fiend into an alley where he was beaten. They did it “because he’s homeless and Native. And they continue to do it.” explained the woman. The interviewer asked if APD harassed them. “Yeah, [the police] cut up our IDs and social security cards.” They described frequently receiving citations for loitering. “They come up and give us a ticket for loitering. We go to court but can’t pay and we end up getting a warrant. We go to jail and get out in the morning.” They described this as a pattern that happened frequently.

Nearly every Native person interviewed de-scribed APD’s use of racial slurs, such as “dirty Indian.” They described encounters that began with APD oﬃcers telling them to “go back to the reservation.” One Native man reported: “I was walking on the street and [a cop] was following me. I’d go down the alley and he’d follow me. ‘Why don’t you go back to the rez. You’re not welcome here in Albuquerque,’ he told me.”

A homeless Jicarilla Apache man pointed to the ground. “This is ours, our land,” he said. “And the cops they’ll say things like ‘Why do you want to bring the reservation our way?’” ABQJustice investigators asked how often harassment is also violent. “It’s usually,” he said. He showed wrists covered in scabbed-over wounds he said were from handcuﬀs. He pulled oﬀ his sunglasses. One eye was red and swollen. “They maced me in this eye. They walked up to me from behind and maced me like this,” he said, as he put his hand inches from the interviewer’s eyes to show how it was done. “How common is this? Does this happen to everyone?” “Yes,” he said. “They handcuﬀ you and then they beat you and then they take you to the hospital and say something like ‘we found him this way.’”

A young Native women was reluctant to talk to investigators but ﬁnally described an incident that happened in the fall of 2014. “Tis cop just drove up on me, got out and slammed my head into the pavement. Ten he just got in his car and drove away.” She was walking with a friend who described a constant pattern of harassment. “We’ll be waiting at the bus stop and cops will pull up and tell us to keep moving or they’ll arrest us for loitering.”

Father Francis Quintana of the Blessed Oscar Romero Catholic Community offered a statement about the excessive, brutal, and unjustifed force (often terminal) of the APD, and plea to them to stop it.

Melanie Yazzie from the Red Nation and member of the Diné nation testified that “The problem is colonization. Taking and stealing by force is a fundamental aspect of how all of this relates to Natives.”  Indeed it is.

One would have hoped that the People’s Tribunal had been covered by some mainstream media, but at least the UNM newspaper, The Daily Lobo did.  Via Jonathan Baca:

“Los Jardines Institute member Richard Moore, who has been an outspoken activist against APD violence for close to 50 years, presented this historical overview to the tribunal.

“The militarization of APD and the police forces have a long history. It’s not been recent over the last four or five years,” Moore said. “There’s some real historical pieces there that go along with this — brutality, harassment — that needs to be added to this whole story to make it a complete picture. In order to understand where we’re going, we ought to understand where we’re coming from.”

“Today was not the beginning, it’s not the end, but it’s a continuation of what needs to be done,” he said.

Correia said the ultimate goal is to build a large group of supporters, and then bring a more refined report to local government agencies.

“The city administration — Mayor Berry, City Administrator Rob Perry — have demonstrated no interest whatsoever in this issue,” he said. “They’re ultimately responsible because they can hire and fire the police chief.”

Perhaps more media will pick up the great story on their efforts.  Activists pushing back against police brutality and abject murder nationwide need to know of the tribunal and the report.  If you;re able to spread the word, please do so.

‘Killer Cops in Madison; “Most Liberal City”, by Paul Gottinger

“God gave Noah the rainbow sign. No more water, the fire next time!” — The Fire Next Time, James Baldwin

Like Loading...
This entry was posted in justice and justice denied, police state and tagged Albuquerque People’s Tribunal on Police Brutality, Citizens Report: 'Targeted: Prejudice and Racial Bias in the Albuquerque Police Department’. Bookmark the permalink.