Good Bombs v. Bad Bombs in the MSM: a Storify by Tweet 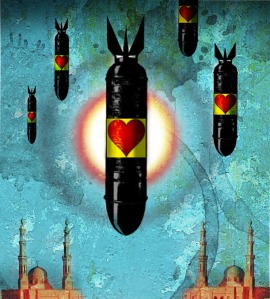 (h/t to Neil Clark, RT, for the Twit accounts) ‘Forced Frenemies at the UNGA: Putin and Obama’ is here.

US-led coalition: 2,579 air strikes in Syria. Russia: 8. Watch the media now fill up with bitter outrage about Russian killing. And 'ours'?

Beware the misleading coverage of where Russia is bombing. https://t.co/RBBM1MSYPt

(The link leads to FAIR’s ‘No ISIS Where Russia Is Bombing–Except Last Week, When ISIS Was Killing Gay Men There?’)

Corporate media ignore the fact that CIA has been arming, training and funding Syrian rebels since 2012. http://t.co/aKnYuYgdg7

American bombs are ethical, Russian bombs are not. You can't make this stuff up, folks. http://t.co/PmfInlP5po pic.twitter.com/04CvMEFkdH

Russia wants to protect its 'only deepwater port on the Eastern Med'. US realpolitik? Never discussed http://t.co/dDvRaLIrDG @BBCJonSopel

Great example: look at this description of Russia's selfish interests in Syria. And grubby US interests? None. https://t.co/drkr853QJX

‘A Useful Prep-Sheet on Syria for Media Propagandists’, by Gary Leupp

“It would be difficult to overstate the significance of what appears to be going on here. This is nothing short of a Middle Eastern coup, as Iran looks to displace Saudi Arabia as the regional power broker and as Russia looks to supplant the US as the superpower puppet master.

Do not expect Saudi Arabia and Israel to remain on the sidelines here.

If Russia ends up bolstering Iran’s position in Syria (by expanding Hezbollah’s influence and capabilities) and if the Russian air force effectively takes control of Iraq thus allowing Iran to exert a greater influence over the government in Baghdad, the fragile balance of power that has existed in the region will be turned on its head and in the event this plays out, one should not expect Washington, Riyadh, Jerusalem, and London to simply go gentle into that good night.”

‘The Need to Oppose All Foreign Intervention in Syria’, by Joshua Frank, managing editor of CounterPunch

That is inarguable, even if one doesn’t agree with all his math is, but also consider War Writ Large:

And not a moment too soon for those who make war or support war for fun, profit, and hegemony:

35 responses to “Good Bombs v. Bad Bombs in the MSM: a Storify by Tweet”