Oh, Burundi and Other Great Lakes Nations: You’re in for a Rough Ride from the Empire…Again.

But #Burundi a day earlier:

“Western press and officials now warn that the Rwandan massacres of 1994 are close to a replay in Rwanda’s neighbor Burundi, which shares its Hutu-Tutsi-Twa demographic. Prominent Western voices blame Burundian President Pierre Nkurunziza for seeking and winning a third term in office, but critics of U.S. and E.U. foreign policy say that their real issues are Western firms’ loss to Russian and Chinese firms in the scramble for Burundi’s natural resources, most notably its nickel reserves, and Burundi’s geostrategic border with the resource-rich Democratic Republic of the Congo.

In “Burundi’s dangerous neighbor,” a letter to the Washington Post, former U.N. official Jeff Drumtra argues that the Rwandan government’s conscription of Burundian refugees to fight in a new, so-called “rebel force” is a grave danger that the international community should recognize before it’s too late.

Drumtra returned several weeks ago from five months work in Rwanda’s Mahama Refugee Camp for Burundian refugees near the Rwandan Burundian border. I spoke to him on Nov. 14, 2015. He stressed that his employment contract with the U.N. had been completed several weeks before and that he was not speaking in any official capacity.”

Druntra’s story is an ugly tale of night raids on the camp, during the hours that UN observers were barred from being there, death threats to those who tried to hide from forced ‘subscription’, and his sense that the US and UN were turning a blind eye to it all.  When asked, he said he had no reason to believe that the US was actually supporting the shanghai-ing, but added that there has been scant reporting on the situation.

In an update, Garrison wrote:

As to Ford’s questioning whether the AU is a Western front for civil war in Burundi, I’d recalled the weird hanky-panky concerning the AU voting for UNSC 1973 (R2P Libya), but I wasn’t able to find the ‘a bare quorum was dug up’ story, but it may have been the Arab League I’d remembered instead.  What I did find, however, was an IPSnews op-ed from June, 2011.  In part:

“Rather than acting decisively, the African Union (AU) cowered to pressures from the West and voted for U.N. Security Council Resolution 1973, which authorised military action in Libya.

The African support of the U.N. resolution was a mistake not only because it undermined the existing mechanisms and processes that are relevant for human protection on the continent but also because the now two-month-long military response in Libya to protect civilians has since degenerated into a plan to embolden Libyan rebels fighting to oust the country’s leader, Muammar Al Gaddafi, from power.

The Mar. 17, 2011 U.N. resolution on Libya is historic but problematic. It marked the first time the Security Council has authorised a military response to protect civilian populations in a non-consenting state. The action, according to the U.S. and its allies, was necessary to protect civilians from a leader who has “no conscience” and was intent on committing mass atrocities.”

Kwame Akona asks some exceptionally good questions about the ‘new norm’ (not law) of R2P, and tells a strange tale about the AU’s Peace and Security Council having established a committee comprising of the heads of states of Mauritania, Congo, Mali, South Africa, Uganda, as well as the chairperson of the AU Commission to find a political solution to the crisis on March 10, 2011.  And yet, before they were able to meet in Tripoli on the 20th to attempt to forge a diplomatic solution with Gaddafi, three African leaders on the SC voted to ‘use force’ in Libya.  A far longer explanation of some of the apparent schisms and skullduggery is here at the World Peace Foundation.

But he also wrote this:

“South Africa’s vote is particularly interesting because it was on both the AU Libya committee and the U.N. Security Council. South Africa’s envoy reportedly failed to show up for the final vote, causing Susan Rice, the U.S. ambassador to the U.N., to dash out of the Security Council chambers in search of him to cast an affirmative vote. It was also revealed later that U.S. President Barack Obama had personally pressed President Jacob Zuma of South Africa to support the resolution.”

Carrots, sticks, and all that jazz.  He did note, however:

“Finally, if African leaders really believed that humanitarian intervention were needed in Libya, they could have acted independent of the U.N. Article 4(h) of the AU Act gives the AU the right to intervene forcibly in one of its member states with regards to war crimes, genocide, and crimes against humanity. Thus if the AU was (sic) convinced that Gaddafi was committing mass atrocious crimes, they could have taken unilateral action without recourse to the U.N.”

From Gearóid Ó Colmáin via Counterpunch: ‘The Empire’s War against Burundi: War Propaganda in Preparation for an R2P “Humanitarian Intervention”

He doesn’t mince words as he (ahem) rather polemically apportions blame, allowing readers to feel the righteous rage beneath his words.

First up are the deep state NGOs funded by friends of military interventions to ‘stabilize’ nations they’ve worked to undermine.  He then moves to my personal favorite arm of NATO:

“The Burundian government has become a target of Africom, US neocolonial rule in Africa, due to its independent development policies which advocate the creation of a strong state with a multi-vectored foreign policy. Important contracts have been signed in recent years with Russia and China for the exploitation of natural resources such as nickel. The country is also moving closer into the orbit of the BRICS countries. This is why it is being attacked by Western backed political subversion.”

Well yes, we know why this ‘pivot’ is afoot, and is interwoven with the same schemes going on in so many African nations (cue Nick Turse’s reports), including the fact that China is building their first-ever military base in Djibouti, not far from Camp Lemonier..  Ack!  The Chinese are coming! Why is no one scared?  Fuck a multi-polar world!  It’s ours!

He writes of the reasons why Pierre Nkurunziza is such a popular as a leader, although noting he hasn’t risen to the level of Thomas Sankara, sometimes known as “Africa’s Che Guevara”.  But Colmáin makes the case that in aiming to eradicate poverty, champion women’s rights, increase education, and refusing to bow to the neo-colonial corporate powers that have are again stoking up new tensions between the Tutsi minority and Hutu majority, he is indeed a threat to the PTB.

He writes of the full-throated campaign by NED, USAID/CIA, Human Rights Watch, etc., to portray the Burundian government as:

“…threatening to exterminate the Tutsi minority. They do this by twisting almost every statement the government makes calling for calm and unity among all Burundians into incitement to racial hatred and genocide. The spreading of rumours that promote fear is an integral part of imperial destabilization techniques.

Amnesty’s (International) mendacious report on the ‘crackdown’ on ‘peaceful protesters’ and ‘human rights’ activists in Burundi has now been released in order to provide justification for the invasion and occupation of Burundi by international ‘peace-keeping’ forces under the spurious UN doctrine of ‘responsibility to protect’, which translates as the responsibility of the global corporate polyarchy and its puppet governments to ensure that no nation, no matter how small or insignificant, dares challenge the self-proclaimed authority of their ‘global governance’.”

Now given that “the bidness of Amerika is bidness (Molly Ivins), this photo should come as no surprise, and yes, Kagame was at the 2015 Global Conference as well. 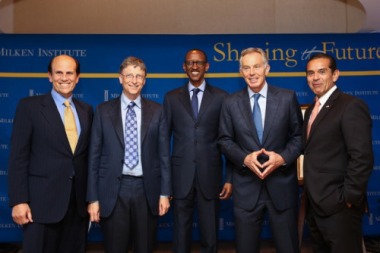 The photo comes from a reprint of this op-ed at urugaga.org  titled ‘Samantha Power, Louise Mushkiwabo, and Collette Braeckman Bring the Dead Back to Life in Order to Perpetuate a Lie’.  The reference to ‘the dead’:

“In recent days a fake letter claiming that the FDLR was in Burundi, working with President Nkurunziza to exterminate the Tutsia surfaced out of thin air, and was immediately promoted on social media by Rwandan Foreign Minister Louise Mushikiwabo, Belgian Journalist/Rumour monger Colette Braeckman, and various Burundian opposition figures. This cynical choir of sinister characters claimed that this was the smoking gun they had long waited for, to prove that the FDLR was in Burundi working with President Nkurunziza to kill tutsis. According to these people, this was the final piece that gave President Kagame the right to march into Burundi to set things straight. All that was left, a decision by the UN Security Council,declaring Burundi a property of the UN/US where Kagame can lead his band of looters and pillagers to dispose of as they please. The task to bring this so called compelling evidence to the Security Council was assigned to the US Ambassador to the UN Samantha Power, who has been itching for a fight with Burundi for the last couple of years.

It turns out the letter in question was written on November 4th 2015, by an FDLR Commander by the name of Col. Kabuyoya who passed away several years ago, May He Rest in Peace. Now, unless, the UN wants to accuse the FDLR of running an army of Whitewalkers like in Game of Thrones (an unsettling thought for Kagame who apparently loves the HBO TV show) whereby its fallen soldiers come back to life to fight as fearless ghostly commandos, Col. Kabuyoya did not write any letters.”

Let’s just say that the author narrates a hideous and vicious campaign that’s “worked for the RPF (Rawanda Defense Forces in the past) to perfection, and as a result the whole region has been in turmoil ever since, and more than 12 million people have lost their lives. Therefore, anyone who claims to care about the region to be engaged in this kind of politics, is outright criminal, and the international actors who are party to this are just as guilty.”

But no story on the Great Lakes Region and Paul Kagame would be close to complete without bringing Kagame’s BFF Susan Rice into it.  In his ‘Did Bloody Hands, Not Black Womanhood Sink Susan Rice Nomination?’, Bruce A. Dixon in Dec. 2012 shines a bloody bright light on their relationship as having caused her to shield him from censure, and has been a chief architect of USian Africa policy since her days with Bill Clinton.  Of course, she’s since been the US Ambassador to the UN, and is now Obama’s National Security Advisor.

From ten days or so ago:

Like Loading...
This entry was posted in empire and war crimes, shock doctrine control and profiteering. Bookmark the permalink.

34 responses to “Oh, Burundi and Other Great Lakes Nations: You’re in for a Rough Ride from the Empire…Again.”