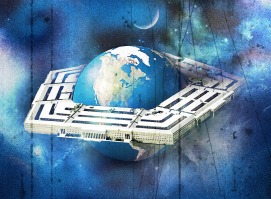 Silly RT journalist Dan Glazebrook claims that ‘‘NATO drills – US attempt to show readiness for war against Russia’.  He writes:

The scenario will mimic a military conflict with armed forces in a fictional cold country. Meanwhile, Norway’s current non-fictional security review lists Russia as one of the main threats. NATO officials, however, claim there’s no connection”.

Well, okay back to Glazebrook, he admits that the drills are part strategic, but part well…a demonstration to Russia about NATO’s Exceptional Power (let’s face it: penis measuring, as per the news from some debate going on or other).

Sure, he points out a few facts that have made him paranoid about all this:

“There are strategic elements. There is going to be strategic resource wars in the Arctic and they are preparing for that… Remember the US strategy of full-spectrum dominance announced after the end of the Cold war: the idea that there should be no inch of the planet really that is beyond US military control…But I still think first and foremost they need to convince the world, demonstrate to the world that they are willing to go to war with Russia. Because it may be a bluff, but they need to convince the world that this is not a bluff and that they are able to do that. And for sure there are elements in the US military establishment [who] would be willing to do that, and that is not a bluff. So, it is a very dangerous situation that we are seeing develop here.”

Mind you, he does point out the proxy wars against The Bear in Ukraine (minimal) and Syria, where their help was actually sought (gasp).  Then he drags in some of the oldest chestnuts in the book:

“It’s an observable, empirical fact that NATO is surrounding and encircling Russia with troops, threatening Russia with this kind of exercises. We also know from past experience that NATO countries’ leaders are not to be believed when they reassure Russia. For example, when George Bush Sr said that NATO won’t advance one inch to the East, and every country that has joined the EU to the East had subsequently gone on to join NATO. NATO assurances are not worth the paper they are written on. It doesn’t matter what NATO is saying, it is what they are doing that gives their game away.”

“The move is unprecedented in modern times. With the exception of Nazi Germany’s invasion of the Soviet Union, Western military power has never been positioned so close to Russia. The Obama administration’s decision is Russian roulette Washington-style, making the new Cold War even more dangerous than the preceding one. Russia will certainly react, probably by moving more of its own heavy weapons, including advanced missiles, to its Western borders, possibly along with a number of tactical nuclear weapons. Indeed, a new and more dangerous US-Russian nuclear arms race has been under way for several years, which the Obama administration’s latest decision can only intensify.”

Oh, wait; he’s indeed right about that… is it about weapons escalation to bankrupt the former USSR?

And yeppers, Glazebrook is correct about the resource wealth in the Arctic Circle, and we all remember SoS Clinton’s rush to Scandinavia to “…assert U.S. claim in scramble for Arctic” (Reuters), and weren’t there some stories about USians planting flags on the ocean floor as ‘claims’ and whatnot?
The silly RT video in Dan’s news piece joshed around about the agitprop target being instead: Iceland or Greenland.  Ha, ha.  Me, I’m convinced that it’s Santa’s Workshop, myself.

Hell’s bells; let’s go see what NATO on the Twit Machine has to say, okay?

(hay-ull, I couldn’t even understand the dude…)

hrooom, hrooom…
“The B-52s will conduct multiple sorties over the course of the exercise, engaging in simulated strikes against ground targets inside the training area. As the U.S. Air Force’s premier nuclear-capable, strategic heavy bomber, the B-52 is capable of delivering a large payload of precision nuclear or conventional ordnance over long distances while also providing decision makers the ability to rapidly project military power.
“Bomber participation in joint military exercises like this one are an expression of the U.S. commitment to supporting our allies and partners, demonstrating our shared dedication to promoting global security and stability,” said Maj. Matt Spinelli, 2nd EBG assistant director of operations.
The B-52s will join with KC-135 Stratotankers and F-16 Fighting Falcons to serve as the American air component for the duration of Cold Response 16. A number of C-130 Hercules will also be on hand to provide support to ground forces.”

Sure, you can make a big deal about those Boeing (boing, boing, gone, ‘Whoopee they’re all gonna die!) Stratofortess B-52s and their 70,000 pounds of weapons payload capabilities, but remember: it’s all a feint, and besides, ours is an All-Volunteer Military now, even though some cynics claim it’s a de facto jobs program.  Ha, a brilliant move ending the draft was, including precluding a bunch of Commie war-cowards from staging protests across the land.  Ha: ‘What happened to the peace movement’ some ask. 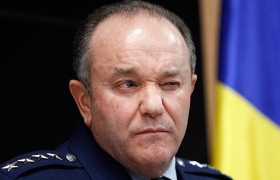 “Breedlove is a real-life general Jack D. Ripper – Stanley Kubrick’s deranged character from his dark satire, titled “Dr. Strangelove or: How I Learned to Stop Worrying and Love the Bomb.” The film ends ominously with nuclear detonations. If Breedlove gets his way, life-on-earth-ending nuclear war with Russia could happen. He’s a menacingly anti-Russian psychopath with his finger on the nuclear trigger in Europe, maybe itching to squeeze it. He rails about nonexistent Russian aggression, urges greater militarization of Europe to confront what he calls “an adversary…pos(ing) a longterm existential threat to the United States.” He claims Moscow “weaponized” the refugee crisis, its aerial campaign in Syria a plot to flood Europe with hoards of fleeing people. On March 6, the Military Times said “(t)he Pentagon is discussing plans to permanently move one or more Army brigade combat teams back to Europe, where the top American commander has signaled an urgent need to shore up allied defenses against the Russians.” He wants thousands more US combat troops deployed near Russia’s borders. “We do not have…enough US forces permanently stationed forward…so I believe that the permanent forces forward need to be reviewed,” he ranted.”

There’s plenty more, but well, you get his drift, right?  Paranoid polemics, Inc.

And anyhoo, CENTCOM Generals explained some facts to the Senate Armed Services Committee yesterday, and it may have boiled down to ‘Iran bad, Saudi Arabia good, Libya a failed state, ISIL existential threat, yada yada’ (RT), but they have their hands full, I tell ya!  Oh, well, kill zem all now, sort it out later…just keep the military budget satisfied. 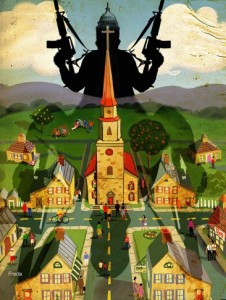 ‘ISIS is Coming!’ by anthony freda

Oh, and don’t forget threatening China over free shipping lanes.  And from what I read, things are going swimmingly in Afghanistan (2045!  can’t wait for our peace dividends!), but when they’re not, the UK troop and police trainers are to blame.  Got it?  (not ANASOC, ANASOC, genuflect, genuflect…)

This entry was posted in empire and war crimes, geopolitical matters, realpolitik,. Bookmark the permalink.