(My sincere compliments to RT)  Who among us doesn’t need some celestial perspective from time to time?  It’s been cloudy and snowy here lately, so: no visible night sky, no Milky way for spiritual sustenance.

Above: “The European Space Agency has shared an incredible image from deep inside the Milky Way’s abundance of clouds, showing the fascinating formation of new stars.”

Think of our galaxy as a thick disc with spinning arms.  The visible part of of what we see as ‘milk’ is comprised of so many stars that we can’t see single ones with our naked eyes.  What we do see overhead is by way of gazing at the edge of the galaxy; awesome, isn’t it?

The ESA’s Herschel space observatory – the largest single mirror ever built for a space telescope – captured the image of what they called “the nursery of the next generation of stars.”  The blue wave represents the coldest parts of the cloud at -259 degrees Celsius and contains 800 times as much mass as the sun. The warmer regions of the cloud are color-coded in red. 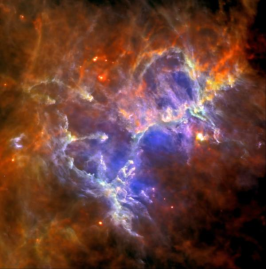 From Spaceinfo.com: Thousands of galaxies crowd into this Herschel image of the distant Universe. Each dot is an entire galaxy containing billions of stars.  While estimates among different experts vary, an acceptable range is between 100 billion and 200 billion galaxies, Mario Livio, an astrophysicist at the Space Telescope Science Institute in Baltimore, told Space.com.  Also mind blowing is that the colour tells you the distance of the galaxies: red is distant, blue is “nearby”.

From the Wiki: The Milky Way is estimated to contain 100–400 billion stars, although this number may be as high as one trillion.  The center of the Galaxy lies in the direction of the constellation Sagittarius; it is here that the Milky Way is brightest. From Sagittarius, the hazy band of white light appears to pass around to the Galactic anticenter in Auriga. The band then continues the rest of the way around the sky, back to Sagittarius.

Via space.com:  At the center of the galaxy is the galactic bulge. The heart of the Milky Way is crammed full of gas, dust, and stars. The bulge is the reason that you can only see a small percentage of the total stars in the galaxy. Dust and gas within it are so thick that you can’t even peer into the bulge of the Milky Way, much less see out the other side.

Tucked inside the very center of the galaxy is a monstrous black hole, billions of times as massive as the sun. This supermassive black hole may have started off smaller, but the ample supply of dust and gas allowed it to gorge itself and grow into a giant. The greedy glutton also consumes whatever stars it can get a grip on. Although black holes cannot be directly viewed, scientists can see their gravitational effects as they change and distort the paths of the material around it, or as they fire off jets. Most galaxies are thought to have a black hole in their heart.

Not only is the Milky Way spinning, it is also moving through the universe. Despite how empty space might appear in the movies, it is filled with dust and gas — and other galaxies. The massive collections of stars are constantly crashing into one another, and the Milky Way is not immune. In about four billion years, the Milky Way will collide with its nearest neighbor, the Andromeda Galaxy. The two are rushing towards each other at about 70 miles per second (112 km per second). When they collide, they will provide a fresh influx of material that will kick of star formation anew. The Andromeda Galaxy is obviously not the most careful of drivers. It shows signs of having already crashed into another galaxy in the past. Although it is the same age as the Milky Way, it hosts a large ring of dust in its center, and several older stars.

This is an artist’s rendering of the collision.  My.stars. (so to speak)

Looks like stars but they're not. Each dot is an entire galaxy. Wisps are in our own Milky Way. By @ESAHerschel ATLAS pic.twitter.com/4eSE5YZ75Q

This entry was posted in astronomy/cosmology. Bookmark the permalink.