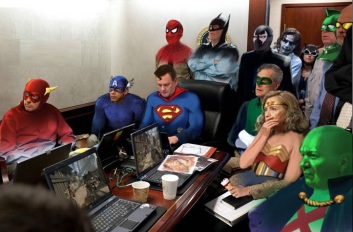 The CIA announced to its 1.33m followers on Twitter that it would be tweeting the raid on Sunday using the hashtag #UBLRaid.  In a preamble, the CIA praised the success of the mission as the “culmination of years of complex, thorough and highly advanced intel ops & analyses led by CIA w support of [intelligence community].”

Join us beginning at 1:25 p.m. EDT today as we tweet the #UBLRaid as if it were happening today. pic.twitter.com/x8EBpW571f

Daring #UBLRaid was an IC team effort & in close collaboration with our military partners.https://t.co/rklCIRLlgF pic.twitter.com/xZObdGeqPR

(CIA spokes-flak): “On the fifth anniversary, it is appropriate to remember the day and honor all those who had a hand in this achievement.”

However, not everyone is convinced by the CIA’s official account of the Bin Laden operation. Seymour Hersh, the Pulitzer-prize winning investigative journalist renowned for breaking the My Lai and Abu Ghraib stories, says the claim that Bin Laden was tracked down by painstaking surveillance is a fiction constructed by the Obama administration.

Instead, Hersh claims Bin Laden was given up by a rogue Pakistani official in exchange for the multimillion-dollar reward. He also cast doubt on the claim by US officials that Bin Laden died in a firefight, one of the parts of the story that White House spokesman, Jay Carney, later admitted had not been accurate.

‘The killing of Osama bin Laden: how the White House changed its story; Bin Laden not armed and did not use woman as human shield, US admits; Barack Obama’s spokesman blames ‘fog of war’, the Guardian

Oh, yeah; ‘Geronimo’s’ body was wrapped in sailcloth and secretly buried at sea, too.

While the CIA flak claims this ain’t the first time they’ve done this (citing postings to mark other historical events, including the Glomar operation, Argo, U-2 shootdown, and the evacuation of Saigon), it begs the question: why now?  Is it the spectre of (shhhh…Benghazi)?  Or by a way of a warning to any enemies of the Empire?  Moqtada al-Sadr or others?  Or just a campaign booster for Clinton, or by way of adding to Obama’s lustrous ‘legacy’?

Didja know they kinda changed the name of the glorious op to Operation Neptune Spear later on?  Yanno, because: they took some heat on the name, and to honor the SEAL’s insignia?  Well, good, because they killed him like Crazy Horse, then lied, lied, and lied about it all.  It would be fine to hear who was involved in the decision to ‘live Tweet’ this, eh?  It’s one more example that this government is not only spiritually dead, but will one day…reap what it’s sown.

USA!  USA!  USA!  I won’t blame you a bit if you can’t bear to watch or listen to the Amerikan Exceptionalist™ agitprop.  I won’t even bring any quotes, although a few of Miz Foggy Bottom’s are tempting…

After the official WH photographer split, how long was it before they brought out the champagne and giggled and snorted and wiggled with glee?  You decide.  Or do you believe any of the story?