(My apologies that this may be sorta the War and Peace of Eritrea given the length.  Believe me when I tell you that I edited out quite a bit, but his has all been bothering me so much that I just kept going…and going.  If you choose to give reading it a pass, I could hardly blame you.)

This week one slice of the Commie Twittersphere had been providing pushback to a new report by the appointed three-member COIE (UN Human Rights Commission of Inquiry Eritrea) that indicted Asmara (the capital) in this manner:

‘Eritrea has committed widespread crimes against humanity, says UN; Up to 400,000 people in Eritrea enslaved by authoritarian government, UN inquiry finds. Eritreans are one of the largest groups crossing the Mediterranean’; the Guardian.  The report calls for the perpetrators be tried at the Hague.

Don’t fault yourself if you couldn’t find Eritrea on a map; I had to go hunting for one.

This ‘report’ is everywhere, and similar hysteria rules.  A couple articles made some modest try at bringing some fairness in the way of Al Jazeera by bringing in two Tweets from the Eritrean Minister of Information in their ‘Eritrea commits crimes against humanity, UN says; UN investigation reports a litany of crimes committed in Eritrea since 1991, including enslavement, rape and murder’.

Well the bastards.  Yesterday there was a charcoal or pencil drawing of a prone man, legs and arms tied together, and being suspended off the ground to a tree limb, clearly being egregiously tortured.  Note was made of ‘drawing used by the permission of the artist’.  Guess what?  It’s been replaced by a photo of lines of bedraggled-looking people. I just went a-hunting to see if anyone knew where it went, where I could find it…and blimey.  It turns out that the UN COIE had published it and another torture drawing within their Eritrea-damning report in 2015, ‘UN accuses Eritrea of ‘possible crimes against humanity’, Al Jazeera.  (scroll down for torture drawings)

“But the lengthy UN report, issued on June 8, went further by claiming the Eritrean government might be committing “crimes against humanity”. The Commission of Inquiry on Human Rights in Eritrea was established in 2014 to investigate possible human rights violations since the country’s independence in 1991. That year marks the end of a 30-year war between Eritrea and neighbouring Ethiopia.

Alongside the written report, the Commission published sketches by an Eritrean torture survivor highlighting the repressive system of Eritrea.”

The recent AJ piece contained this handy graphic, lest you don’t get the thrust. 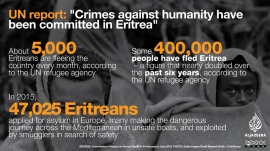 And boy, howdy, is Amnesty International big on the report, one of the compromised NGOs, in my book (note the first photo) Action!  Response from Eritrea! Like DRNK!  The BBC did permit a reporter to travel to Eritrea, and allowed her to push back on the current narrative a bit, but interspersed her commentary with the true facts. People Mary Harper had spoken with agreed with Ford that many Sudanese and Ethiopian ‘refugees’ did in fact claim to be Eritrean, as that provided them a free landing pass in other countries.

Now there’s the possibility that all of these charges against Isiais Afewerki and the power structure are so.  But as we’re getting only too familiar with the Empire’s plans for regime change for reasons of its own, further investigation and opinion seems in order.  Even supposing many of the report’s charges are true, one might think that it’s the nation’s business, not the Empire’s, or by extension, the UN’s.

Post-WWII, according to the Wiki, Hailie Selassie laid claim to the place in a letter to FDR, and given that the Brits and Amerikans had reckoned that it would be a nice reward for Ethiopia’s help during WWII, they pushed for a subsequently approved UN resolution for Eritrea to be absorbed into Ethiopia as federated states.

“The federal government, which for all intents and purposes was the existing imperial government, was to control foreign affairs (including commerce), defense, finance, and transportation. The resolution ignored the wishes of Eritreans for independence, but guaranteed the population democratic rights and a measure of autonomy.”

Finally in 1991 rebel forces overthrew the Ethiopian military, and: “Following a UN-supervised referendum in Eritrea (dubbed UNOVER) in which the Eritrean people overwhelmingly voted for independence, Eritrea declared its independence and gained international recognition in 1993. The EPLF seized power, established a one-party state along nationalist lines and banned further political activity. There have been no elections since.”

But the new nation is a mere 25 years old, full of competing ethnic groups, etc., and locals supporting the government say that Ethiopia had been occupying force from 2000 until 2005, and border disputes have been rampant and bloody.

FORD: Well, you just read the copy, the language, which said that Eritreans should be given that special consideration, that they certainly are political refugees. If the question is, why is the United States carrying out this long campaign against Eritrea, it’s because Eritrea wants to be an independent country. It’s been called by some the Cuba of Africa. It does not wish to entangle itself in all of these corporate webs of the World Bank and the IMF and such. It doesn’t want to sign any kind of treaty with AFRICOM, the U.S. military command, which has agreements with all but three countries in Africa, Eritrea being one of them. All of that makes Eritrea an enemy country. Enemies can be lied about at will.”

If this full-court press against this tiny nation, pop. 6 million is bogus, what could some of the reasons be?  Wiki says about the economy:

“Eritrea has an extensive amount of resources such as copper, gold, granite, marble, and potash. The Eritrean economy has undergone extreme changes due to the War of Independence. In 2011, Eritrea’s GDP grew by 8.7 percent making it one of the fastest growing economies in the world.

Also mentioned was the fact that even during the Ethiopian/Eritrean border war, the nation continued with infrastructure development: highways, rail lines, dams, airports, seaports on the Red Sea, a long coastal highway, and so on.  Can’t have that, eh?

But is it possible that a resource war for Eritrea is on the way?  If it’s happened in Burundi, it’s still covert, but the drums are still beating over these same issues in the Western media.  Egad; even scanning that diary makes me ill: Sam Power, Kagame,Obama, with able assists by some folks doing critical Empire analysis, including Glen Ford and Ann Garrison.

Nick Turse covers the Dark Army’s doings well, and says that 51 of the 53 African nations have a US military presence, primarily JSOC/special ops/contract forces.  Last year he’d counted 674 secret ops in Africa, and names a hella lot of them. Mind you, I don’t believe that his noting that Africom had failed in its mission is so; rather, that their ‘failures’ are just what the doctor’s ordered in the name of Never-ending War. Have they and/or the CIA-heavy USAID and NED been busy in Eritrea, fomenting for regime change or an R2P?  Would that dovetail with the fact that the nation disdains the West’s ‘gifts’ of IMF loans, NATO/Africom membership, and wants to be self-sufficient?  Similar pre-putsch civil strife has been documented in Brazil, Argentina, Venezuela, and may be underway in Bolivia and Uruguay right now.

Would the nations’ being on the Red Sea be another reason for the hegemon desiring to control it?  Shipping lanes north to the Suez Canal and Mediterranean, for instance? Is that another reason why Ethiopia is so keen to own and occupy it?  Look at the nations it borders, especially Djibouti, home of the first major US drone base in Africa.

The Commission Of Inquiry On #Eritrea has no legal mandate

Here's key points in why it carries no legal weight pic.twitter.com/PKZ7EgpuVp

Why #Eritrea? Why now?

The link goes to: ‘What the UN Gets Wrong About Rights in Eritrea ; A finding of crimes against humanity would be indefensible, said the Atlantic Council’s Bronwyn Bruton, by Ashish Kumar Sen.  Comments are a bit of a food fight.

Well, hell’s bells; I hadn’t found this looking for it at wrongkindofgreen (scroll down for Vimeo):

WATCH | #ERITREA: ON THE HIT-LIST OF THE WEST BECAUSE IT SERVES ERITREANS INSTEAD OF SERVING EMPIRE https://t.co/4HXHp4W1WT

Cripes, I finally remembered to look for Wikileaks on Eritrea: ‘WikiLeaks Exposes that Sanctions Imposed against Eritrea are politically motivated’, 28 April 2015, ecssonline.com   Cherry-picked, for certain; there are loads of other cables from Ambassador McMullen expressly annihilating President Isaias.  The one above features the usual cast of characters: Condi Rice, Sam Power, Susan Rice, sanctions, sanctions.  Others are outrage at being served ‘sheep innards, and without a fork!!‘, ‘Isaias is a madman!  sort of hysteria.  But obviously, the point was to isolate the nation, impoverish it, even down to trying to prevent remittances from citizens working out of the country. There were  claims that Asmara was supporting Al Shabaab in Somalia, as well; who knows?

I’ll leave you with this sublime photo of the hills of Eritrea I saw on Twitter.  Please offer anything you know, suspect, dig up on this subject, and we’ll all appreciate it.  Cool way to stack hay, yes?

Like Loading...
This entry was posted in africom, nato, empire and war crimes, geopolitical matters, realpolitik,, WikiLeaks & other leaks and tagged COIE report. Bookmark the permalink.

10 responses to “#Eritrea Wot the Fok? a Kinda/Sorta Storify”