Out w/ the friday trash while the world’s in mayhem™: those #28 pages 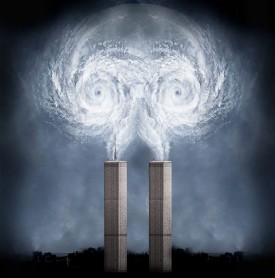 The most comprehensive coverage I’ve read so far is by Bill Van Auken at wsws.org, although I haven’t taken the time to do more than scan the piece by Leopold and Kaye Tweeted below.  They do, however, call hooey on the Official 9/11 Commission’s whitewash of the fact that Saudi government (‘Our Partners in Peace’) officials weren’t directly implicated (Saudi citizens mebbe, mumble mumble..).  It doesn’t seem as though the Trotskyites’ essays are labeled Creative Commons, so I’ll paste in the beginning, and hope you’ll read the rest.

“The public release Friday afternoon of a section of the Congressional report on the 9/11 attacks, which had been kept secret for 13 years, has provided fresh evidence of a deliberate coverup of the role played, not only by the Saudi government, but US intelligence agencies themselves, in facilitating the attacks and then covering up their real roots.

The 28-page segment from the report issued by the “Joint Inquiry into Intelligence Community Activities before and after the Terrorist Attacks of September 11, 2001” provides abundant and damning evidence of extensive Saudi support for the 9/11 hijackers—15 out of 19 of whom were Saudi nationals—in the period leading up to the attacks on the World Trade Center and the Pentagon that claimed nearly 3,000 lives.

The Obama White House, the CIA, the Saudi monarchy and the corporate media have all tried to portray the documents—released on a Friday afternoon to assure minimal exposure—as somehow exonerating the Saudi regime of any culpability in the 9/11 attacks.

“This information does not change the assessment of the US government that there’s no evidence that the Saudi government or senior Saudi individuals funded al-Qaeda,” Josh Earnest, the White House press secretary said Friday, boasting that the main significance of their release was its proof of the Obama administration’s commitment to “transparency.”

In reality, the 28 pages have been kept under lock and key since 2002, with only members of Congress allowed to read them, in a Capitol Hill basement vault, while prohibited from taking notes, bringing members of their staff or breathing a word of their content.

The Obama administration, like the Bush administration before it, maintained this secrecy for several reasons. First, it was concerned that the documents would jeopardize its relations with Saudi Arabia, which, after Israel, is Washington’s closest ally in the Middle East, a partner in bloody operations from Afghanistan to Syria to Yemen, and the world’s biggest buyer of American arms.

Even more importantly, it was concerned that the 28 pages would further expose the abject criminality of the US government’s role in facilitating the attacks of 9/11 and then lying about their source and exploiting them to justify savage wars of aggression, first against Afghanistan and then against Iraq. These wars have claimed over a million lives. The false narrative created around the September 11 attacks remains the ideological pillar of the US campaign of global militarism conducted in the name of a “war on terror.”

Media reports on the 28 pages invariably refer to the absence of a “smoking gun,” which presumably would be tantamount to an order signed by the Saudi king to attack New York and Washington. The evidence is described as “inconclusive.” One can only imagine what would have been the response if, in place of the word “Saudi,” the documents referred to Iraqi, Syrian or Iranian actions. The same evidence would have been proclaimed an airtight case for war.

Among those who were involved in preparing the report, John Lehman, the former secretary of the navy, directly contradicted the official response to the release of the previously censored section. “There was an awful lot of participation by Saudi individuals in supporting the hijackers, and some of those people worked in the Saudi government,” he said. “Our report should never have been read as an exoneration of Saudi Arabia.”

Similarly, former Florida Senator Bob Graham, who chaired the committee that carried out the investigation, suggested that the information released Friday was only the beginning. “I think of this almost as the 28 pages are sort of the cork in the wine bottle. And once it’s out, hopefully the rest of the wine itself will start to pour out,” he said.

What clearly emerges from the newly-released document, which is titled “Finding, Discussion and Narrative Regarding Certain Sensitive National Security Matters,” is that there were multiple indications of funding and support for the 9/11 hijackers and Al Qaeda in general, but that investigations were either shut down or never initiated because of the close ties between Washington and the Saudi monarchy, and between US and Saudi intelligence.”  (again, the rest is here.)

Commenters ask why there is no mention of Israel/Mossad in the report, and nothing about the collapse of building #7, etc.

Emptywheel’s focus was that she either hadn’t known, or had forgotten that the ‘FBI Established Saudi Task Force Just before Joint Inquiry Release’.

“That means over a year elapsed before the FBI really started investigating this angle. It goes on to reveal FBI was not focusing any counterintelligence resources on Saudis before 9/11, because “FBI received ‘no reporting from any member of the Intelligence Community’ that there was a [redacted] presence in the United States.” A very heavily redacted passage implies that’s because they were an “ally” [scare quotes original].

She has sections of the pdf posted, but I can’t reproduce them.

“It goes on to note that CIA did have records of such ties (we knew that); it makes no mention of NSA, though they knew of Saudi ties as well.

The report even reveals that Robert Mueller learned about the Saudi role in the attack from the Joint Inquiry.

This is fairly unbelievable, but all too believable.”

(I find it completely unbelievable, myself.)

She also linked to this scathing indictment by Kristen Breitweiser, 9/11 widow of the Jersey Girls fame: ‘29 Pages Revealed: Corruption, Crime and Cover-up Of 9/11’, including this:

For example, one glaring piece of information was not mentioned in either the 9/11 Commission or the Joint Inquiry’s 29 pages — the information regarding Fahad Thumairy and Khallad bin Attash found in both an FBI report and a CIA report —that are now declassified. Both reports indicate that Fahad Thumairy — a Saudi Consulate official—helped bring Khallad bin Attash into the United States in June of 2000 so he could meet with two of the 9/11 hijackers, Khalid al Mihdhar and Nawaf al Hazmi. Thumairy escorted bin Attash — a known al Qaeda operative — through INS and Customs at LAX evading security and any possible alarm bells. Again, this information is found in both a CIA and FBI report.”  (the rest is here.)

More from the Dynamic Duo that peers into the Abyss for us:

My report:
DIA Official Says That Before 9/11 Pentagon Told its Own Intelligence Unit to Stop Tracking Bin Laden https://t.co/ZWCCwIBaFM

.@joshuahersh & me on the #28 pages, Saudis & Abu Zubaydah. Our 1st joint byline! https://t.co/DaKXYGg0nd via @vicenews

From their piece above, this point pops out again:

“”What often gets lost in those theories is that the 28 pages were based almost entirely on raw, unvetted material that came to the FBI,” Kean and Hamilton wrote in an op-ed in USA Today this past April. “That material was written up as possible leads for further investigation, and the 28 pages were a summary of some of those reports and leads as of the end of 2002 — all of them uninvestigated.”

Hey, I know it's dark, but need to look at reality when it comes to CIA using torture to recruit double agents. https://t.co/gg6Tt5Z7Tw

How many world citizens have died now in this 9/11 War on Terror?  How many are in Diaspora, how many DU generations will there be in Iraq?  It was worth it, wasn’t it?  Or will they come for us one day and say: Enough?

Bonus: because I can, and because: the ‘resurrected’ fascist Narenda Modi/s.  Remember not long ago Tulsi Gabbard had quit her position on the DNC and endorsed Bernie Sanders?  There were quite a few headlines and petitions to the effect that he should immediately name her as her Veep.  Ooopsie.

(OTOH, Jalini called Obomba ‘progressive’ or some such…)  yow!

This entry was posted in empire and war crimes and tagged Senate Intel #28 pages released. Bookmark the permalink.

12 responses to “Out w/ the friday trash while the world’s in mayhem™: those #28 pages”