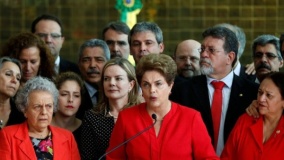 dilma speaking from the alvorada palace

(Sorry that this is a bit slap-dash; I’d been working on the Three T’s Corporate ‘Trade’ Deals post, but this seemed more important for now.)

The  Senate voted 61-20 to remove her from office on August 31, but in a separate vote on whether she would be barred from office for the next eight years, Senators voted 42 in favor and 36 against, with three abstentions, falling short of the threshold required to pass.  Comically, newly sworn in Michel Temer has already been banned from running for office for the next eight years.

A few remarks from Pepe Escobar yesterday,; there were many colorful Pepe-isms, as well.:

“If we had to rely on a single formulation to explain this charade to a global audience this should be it: The current parliamentary/institutional/big business/big banking/corporate media coup is the tool used by Brazilian oligarchs to smash the wealth distribution drive that preceded, via President Lula, the US-provoked global 2008 crisis of capitalism.

The Lula and subsequent Dilma presidencies had adopted a very Chinese “win-win” model. There was a sort of unwritten pact between social classes: The rich got even richer while the poor got less poor.”  [snip]

“The vultures and their master plan

Emir Sader, one of Brazil’s top sociologists, has summed up what lies ahead: major social and political conflict; military/police repression; tearing up of the social contract; the nation reduced to a mere US vassal; an unelected, illegitimate government with no autonomy, sovereignty and geopolitically sidelined. All the while being “led” by currently interim, and President-to-be Michel Temer, a mediocre, corrupt coward who didn’t even have the balls to attend the Olympics’ final ceremony because he knew he would be booed out of a packed Maracana stadium.

Welcome to post-coup Brazil: Land of permanent crisis, a powerless, illegitimate, corrupt government, economic recession, and unemployment. As Sader noted, “everything positive that Brazil built this century will be thrown out by a coup.”  [snip]

“Many scoundrels/vultures will be dividing the spoils of a dead democracy. What matters is that the number one profiteer of impeachment will be the Goddess of the Market. That also includes Big Business, mainstream media (a monopoly of five families) and of course, Exceptionalistan. Their mandate is clear. The presidency is just a detail. What they need to control is the Finance Ministry and the Central Bank.

Their policies are ready to be implemented: smash the incipient Brazilian welfare state; keep interest rates in the stratosphere; impose a “fiscal adjustment”; and allow capital free flow. Things like this only actually happens in certified dictatorships.”  (the rest is here)

Now Bill van Auken at wsws.org cut Dilma and her PT party no slack, writing that they were trying to reign in social spending for the poor (Pepe Escobar speaks to ‘the pact’ below; who can say?) much in the way Temer has, while paying off debts to the IMF and foreign banks.  He faults her ‘pseudo-left’ supporters for breaking with Trotskyist movement, which led to the corrupt Lords of  Brazilian and global finance capital seizing power.”

At the end he noted:

“Reflecting the position of Wall Street, State Department spokesman John Kirby Wednesday afternoon issued Washington’s seal of approval for the impeachment. “The Brazilian Senate, in accordance with Brazil’s constitutional framework, has voted to remove President Rousseff from office,” he said. “We’re confident that we will continue the strong bilateral relationship that exists between our two countries… We plan to continue this very essential collaboration.”

He added that bringing down Rousseff was “a decision made by the Brazilian people, and obviously, we respect that.”

From Telesur/english: “According to news reports and official sources, 49 of Brazil’s 81 senators face crimes ranging from money laundering to illicit enrichment and electoral fraud.”

“These are the same forces that carried out the 2002 failed coup attempt and the 2014 “guarimbas,” which left 43 dead and over 870 people injured.

Thousands of right-wing protesters in Venezuela poured into the streets of Caracas Thursday morning to take part in a huge and somewhat menacing rally to prod state elections officiels (sic) to speed up the legal process for a recall referendum to remove President Nicolas Maduro from office before the end of 2016.

Organizers have dubbed the rally, “Takeover Caracas,” and some prominent opposition figures have made thinly-veiled threats of violence if the National Electoral Council doesn’t reverse its decision that the referendum can’t possibly be held this year. The date is important because if President Nicholas Maduro is removed from office after January 10th, 2017, representing the four-year-mark of his terrm, his vice-president, who is also a Socialist and Chavista, would serve the remaining two years of his administration.

The 53-year-old Maduro has said the opposition rally is intended to disguise a coup, similar to the 2002 attempt to overthtrow the democratically-elected government of his predecessor, the later Hugo Chavez. As a result, thousands of pro-government supporters have also streamed into the streets of Caracas to defend the Bolivarian revolution, deepening fears of violent confrontations,  like those of 2014 known as the Guarimbas, which left 43 dead and over 870 injured.

“We have to come out and fight for a free Venezuela! We can’t take this any more,” said Elizabeth De Baron, 69, a secretary traveling 25 miles (40km) from the town of Guarenas.”  [snip]

“President Maduro said on Tuesday that the political party Voluntad Popular, led by the imprisoned leader Leopoldo Lopez and his wife Lilian Tintori, is behind a coup plot against his government.

However the government has deployed all security measures to counter any violent actions this Thursday  in order to safeguard the civil society, Maduro has also warned that people involved in violent actions will face the justice.
“Due to the threats of violence, extra police and troops are positioned across the city, with roadblocks expected, to prevent a repeat of past violent actions by the right-wing opposition who are fractured and desperate and have only managed to carry out small protests in the past months.

Earlier this week a group of hardline opponents was arrested after authorities found them with explosives and uniforms of the National Armed Forces.

Meanwhile supporters of the government have reiterated their call for peace in order to reach stability in Venezuela, in recent months there has been a wave of violence against government supporters, left-wing activists and public servants, which many believe is an attempt to undermine the future of the Chavista movement in the country.”

There’s no doubt that Maduro failed to diversify their economy from oil, rout out corruption, but still…as with Brazil, post 2008, the global economy changed for all but the international Banksters and Oligarchs.  For instance, see ‘Critiquing Chavismo’s Shortcomings: An Interview with Miguel Rodriguez Torres’, Aug. 10, 2016, VA.com.  Some of his criticism sounds right, especially on oil and building factories and agriculture for people’s needs, rather than relying on imports.  His claims about the stupidity of how the government went about nationalizing farms seems a bit hard to believe.  Clearly Maduro doesn’t have either Chavez’s charisma nor Hugo’s ability to adapt when policies fail to work.

On the other hand, NPR correspondent John Otis weighs in with the Truth of the evil, obstructive, Maduro government:

@cordeliers  “Media played a conscious and critical role in 2002 fascist coup; there’s every reason to defend Venezuela against their malign interventions”

“On Thursday, February 12, [2015] the Venezuelan authorities announced the arrest of 7 officers of the Venezuelan Air Force who were taking part in a coup plot to remove the democratically elected government of President Maduro and install a “Transitional government” in its place.

According to President Maduro, the plot involved active and retired military officers as well as some opposition figures. He also explained how some of the plotters had been promised a visa to the US in case the coup failed and paid in US dollars, revealing the participation of US imperialism.”, etc.

And remember that ‘on March 9, 2015, US President Obama issued an Executive Order declaring a “national emergency” affirming that “the situation in Venezuela” poses an”unusual and extraordinary threat to the national security and foreign policy of the United States“?  The site addresses that, as well.  Ptui and Pffffft, Mr. President. Can’t have any Bolivarian governments extant now, can we?  Or even quasi-socialist ones, nossir.

“In 2002, Chavez was briefly ousted in a military-backed uprising that he claimed — without proof — was supported by the United States.”

That is quite a whopper even by the abysmal standards of the US media.

The US government publicly supported the 2002 coup in Venezuela. Bush Administration spokesmen Ari Fleischer and  Philip T. Reeker both said that “Chavez resigned” and that a “transitional civilian government has been installed.” They regurgitated the opposition’s version of events and added that they welcomed “early elections”.

Imagine Venezuela reacting that way if Obama’s government was overthrown – not by calling for Obama’s reinstatement, but by parroting the lies of the coup perpetrators and making it obvious that Venezuela welcomed Obama’s ouster. What kind idiot, or liar, would say there was “no proof” that Venezuela “supported the coup”?

As Eva Golinger points out here, US government documents show that the CIA was briefing US officials that a coup was imminent and that it had detailed knowledge of the strategy that would be used. The documents also show that the US continued funding various groups who were involved in the coup after it was defeated.

As noted here by Mark Weisbrot, the U.S. State Department’s Office of Inspector General stated that

“It is clear that NED [the National Endowment for Democracy], Department of Defense (DOD), and other U.S. assistance programs provided training, institution building, and other support to individuals and organizations understood to be actively involved in the brief ouster of the Chavez government.”

If the US had that much evidence of Venezuela’s involvement with a coup in the USA, not even just “support” for  it, ,,,,Well just consider the countries the USA has bombed all over the world.”

Like Loading...
This entry was posted in geopolitical matters, realpolitik,, shock doctrine control and profiteering. Bookmark the permalink.