It’s true that the Euros got a leg up when it comes to the presence of a third, fourth, fifth, and even sixth party in their chambers of lawmaking, where the criminalization of *behavior unbecoming of an entity without a passkey to the chamber’s backdoor is designated. This presence is where the differences, diverging as they do, find their way back to a natural order of confluence, in spite of all the intrigue of electoral gamesmanship.

* that’d be the Brexit

In Berlin, as in almost all the German federal states, the state parliament forever swings between the Social Democratic Party (SPD) and the Christian Democratic Union (CDU).  Though many an American who lives in Germany will tell you that the Christian Democrats are “to the left of Republicans”, it’s a meaningless distinction. The CDU have a function just as the GOP: to maintain the attitude of more patriotic than thou-ness and sing the lamentation of diminishing family values at any and all Das Volk on Parade opportunities,  and always craft a few percentage points advantage to the wealthy than would the Social Democrats when it comes to tax policy.

“Wer hat uns verraten? Sozial Demokraten.”
For their part, the Social Democrats (SPD) do what the American Democrats do best: maintain the façade of weak-willed wimps who fail to stick up for their claimed constituencies with every apparent compromise by playing them on teevee. The question in the refrain in this paragraph’s title is “Who betrayed us?” The answer is as clear. As clear as the SPD’s last Chancellor Gerhard Schroeder’s Agenda 2010 was when he announced it. Think Clinton’s welfare reform.

When considering the Social Democrats betrayal of socialist values, however, one should never forget that it was the SPD’s free use of the Freikorps which got Rosa Luxemburg shot in the head and dumped in the drink. And that’s a liberal interpretation, if y’know what I’m sayin’.

So they build coalitions here in order to reach the majorities necessary to form administrative governments, and the aforementioned intrigue forms around colour combos that lead to oh-so fascinating discussions of what’s in fashion and who’s talking trash about whom within the coalitions.  Agenda 2010 happened during the SPD’s coalition with the Greens, with Joschka Fischer serving as Schröder’s Foreign Minister. I would argue that these parliamentary co-ops basically serve to discredit the smaller parties by association, keeping the two Volksparteien (really, that’s what they’re called) in positions of senior partners in crime. It didn’t help the Greens that that Agenda 2010 was on their watch as partner, but more than a few other things tainted their green a vomit hue.

Joschka Fischer was branded a mover of the German Greens, as though he’d brought the ’68 protest generation into the chamber wearing sneakers. At any rate, most Americans aware of him remember his having told Rumsfeld that he was “not convinced” regarding WMDs in Iraq.  But before that he was also responsible for helping establish the Serbs in the German consciousness as genocidal when he appealed to his fellow junior partners with the ominous warning (translation mine): “We’ve always said ‘Never again war.’ But we’ve also always said, ‘Never again Auschwitz.'”

While mistrust within Chancellor Schröder’s party led to the SPD’s eventual defeat in 2005, it solidified the Greens’ status as also-ran. The SPD went on to form the next coalition with Angela Merkel’s CDU – this time as junior partner. This lasted for one term, and Merkel has gone on to dictate the terms for two more ruling coalitions, the current one, yet another coalition with the SPD.

That’s right, Merkel, come this Sunday’s Berlin state election, will have been Chancellor for precisely eleven years, proving Angie really is following in her mentor Helmut Kohl’s footsteps, who managed sixteen. But this political background is meant as a primer to my main point, which is Sunday’s election in Berlin, because Angie’s next go-round isn’t until next September.

The current gov’t of the city-state Berlin is… surprise, surprise… an SPD-CDU coalition. This means that the partners are currently quibbling over who’s responsible for everything that’s being spun good, bad, and ugly over the last five years. For example, the Berlin Brandenburg Airport, that is now already six years late opening and counting. Ultimately, this schleppy Arbeit cost Mayor Klaus Wowereit his job, though, I doubt he had to resign. He resigned anyway, leaving Michael Müller (SPD) as interim, and candidate to remain. The latter’s main opponent is his coalition partner Frank Henkel (CDU). As Interior Senator, Henkel has most recently made headlines for his war on the autonomous left, in particular, squatters in Rigaer Straße 94.

Long story short: the Regional Court of Berlin found — as of yesterday, twice — that Interior Senator Henkel’s ordered police assisted eviction of the ground floor of Rigaer Straße 94 to have had no legal grounds. That is, the eviction had no legal grounds. The massive use of the riot police is apparently of no legal consequence. And although you’ll find little sympathy for the occupants of the house in online comments sections of the major local media, Henkel has not made himself popular and his party appears to be set to pay for it. Big whoop.

Longer story: Berlin’s resurgent history of squatting began with the breach of the Wall in 1990 and the history of violent removal from- and misappropriation of property appropriated by squat began with a Red-Green coalition. So it doesn’t take a Republican-like police militarising fuckface like Frank Henkel of the CDU to clear out the riffraff. Democrat-like SPDers and Greens will do the job if history deems it their destiny.

This most recent crackdown under Henkel — who successfully had the legal possession of cannabis reduced from 15 to 6 grams — had led one way or another to a resurgence in a nightly effigy of parked luxury car. I say one way or another because, even in the case of agent provoking, it is part & parcel of the program. I cannot prove this point, but there is at least one bustee with a neo-nazi background, who, at least on the surface, appeared quite willing to risk arrest in order to implicate left radicals from Rigaer Straße in the crime. Otherwise the press has been quite willing to unquestionably attribute cars set ablaze to “left radicals” and careful to use the Rigaer address in the corresponding sentence.

But like I said, Berliners have even less tolerance for troublemakers in city hall. At least the demographic as it stands. That’s slowly changing, though. Everybody and his fucking brother wants to come here. Only time will tell if that will include a growing number of people who are sympathetic to the cause of outfitting cops in military gear to better equip them in the fight against extremists “from both left and right”.

A small aside as regards how facets of the German government behave to thwart extremism from both left and right, I alert the reader to the fact that the National Socialist Underground, who were busted in 2006 in the German state of Thuringia, had murdered quite a few residents of immigrant background throughout the country before they were finally busted when they had offed a cop, and the constitutional office responsible for investigating such “threats to democracy” got caught having destroyed a bunch of the NSU files that would have revealed not only the extent of undercover police knowledge of the crimes as they were ongoing (as many as 50 informants, a dozen averaging six-figure incomes from the security services), but included the involvement of employees within the Federal Constitutional Protection Office itself. One agent known in his hometown as “Little Adolf” and who had witnessed one of the murders eventually got transferred to another agency.

Stated Intentions
This brings me appropriately to the biggest political development, and significant this weekend: the nascent party Alternative für Deutschland (AfD). And though I am loathe to compare local phenomena to Trump, it’s hard not to see it, in particular as regards their stated intentions on immigration policy. As a matter of fact, the Left Party’s own Gregor Gysi this week actually blamed the CDU’s “straying from their conservative roots” for the AfD’s recent success, basically saying that the CDU’s base felt they had nowhere else to turn to. Hm.

I usually feel that just about everything ever uttered misses some bigger point and I’d include Gysi’s comments in that stew except that he’s actually right, even if it involves the saddest of realizations. Anyway, the Left party (die Linke) is all alone in forever pointing a finger at the NATO states’ war policy (murderous geopolitics & profiteering) as being the primary cause of the EU refugee crisis.

Where was I? Oh, yeah. Berlin. If you believe the polls, and people do (enough that post election results are always plausible), the AfD stand to become an also-ran (they will easily meet the 5% threshold to get seats), looking to become a second tier coalition wannabe, though the Greens appear to have a slight advantage. That is, the next Berlin coalition will be SPD-Green. It was red-red when I got here, meaning SPD-Linke, the second red being pinko. Those days appear gone, although I saw a huge placard on my way home yesterday that warned the voters that a vote for CDU was “the only way to stop red-red-green” — implying the possibility that they’d need all three parties to form a majority. We’ll see. Berlin is one of the few states to have had The Left in an administrative coalition, but most often they are treated like the red-headed step commie.

As glad as I’ll be to see this guy gone, that only always means, there’s worse still to come. Progress dictates. 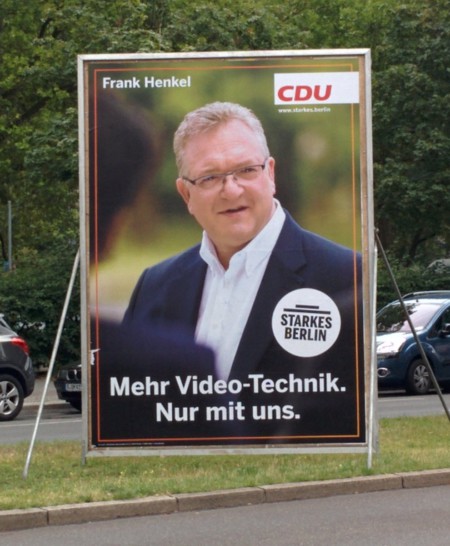