Reunited? How the West was One.

[Edit: Since first making this entry I have added the first map of the districts and shifted the communal map downpage. I made changes to the second and third paragraphs following the communal map for clarity.]

You might recall from last year’s hoo-hah that the whirled‘s had a full generation to digest the reunification of the German state. Let’s take a look at the fascinating colour schemes as seen this morning compared to how it looked for the fifty years the sides were split. On the left you see the results of yesterday’s election- on the right, the city as parcelled out by the confederacy of belligerents at the Potsdam Conference: 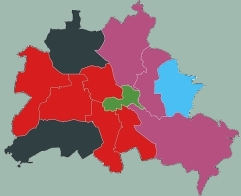 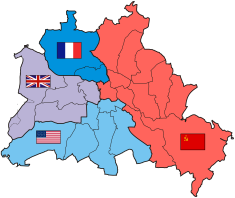 As H. Ross Perot might say, “Innerestin’ idn’t it?” For most, the obvious has long been that the old west-east divide maintains an apparently solid mix of loyalty toward the respective parties of traditional influence. Well, I mean traditional insofar as peoples who were formed out of the decision to choose one kind of government over another that lasted a period of two generations, in weak contrast to the generation of time that followed during which the putative opportunity to rid oneself of the supposed shackles of socialist indoctrination played out in all its glory glory hallelujah. Of course the second part of that last sentence was written from the perspective of a westerner, not because I am a westerner, born & bred, but because the West are the ones who ultimately conquered the city with $oft power   (‘First we take Manhattan’, anyone?).

The more striking reflection is how the western districts vote, with the former British controlled areas going mostly SPD and the French and US territories trending Christian Democrat. As an aside, it’s interesting that the blue chosen by the keep your stinking refugees AfD matches nicely with the shade someone selected over’t the Wiccapaedia for the American sector.

I suppose in order to accurately analyse these tendencies, one should look at the literal outliers in finer detail:

First there’s the oft mentioned fact that no-apologies ultra-right wingers do well in the former states of the GDR, but like so many places where this is the case, it’s a lot more obvious the more rural and/or ‘burbier you go, where they encounter multiculturalism mainly through the distant deigning of demagoguery. This is evident when you visit the concrete reaches of Buch, Marzahn, and Hellersdorf.

That black upholstered armchair perched upon the last eastern peninsula is another story altogether: Mahlsdorf. The biggest difference occurred when the district it’s in, Mahrzahn-Hellersdorf, lost PDS candidate Gregor Gysi, who in 2001 had garnered half the vote. The CDU had already been running a pretty strong second to Gysi’s PDS, at 27 percent. However, in 2006 without Gysi, and with the PDS already dubbed Die Linke on the ballot (as part of the official fusion with the WASG that would take place the following year), they only managed 23 percent. That big a drop within one election cycle must be attributable to the absence of the face of the party during a contentious name change.

Still, part of the CDU’s ongoing ownership of Mahlsdorf in spite of poor showings in the rest of the district probably mirrors that of anywhere you see black: people believe they own their shit because they’re entitled to it and want it to stay that way (as opposed to the baby blue constituencies’ knowing they don’t own shit but wanna keep whatever it is they think they got out of the hands of Arabs, Persians, and Africans specifically as a good place to start).

This’d be a little too like the lazy demographic analysis of social scientistic punditry if I didn’t mention the more detailed reality regarding the latter group’s encompassing, as well, those opposed to big money war profiteering. It’s just that you almost only ever hear them bitching about the result and not the cause. This they have in common with adherents to almost all parties’ factions of loyalty.

But it is in fact Die Linke — running along the former East all dressed in pink — who have consistently taken aim at capital’s war machine and associated investment class. With the exception of Sahra Wagenknecht’s mentioning that “of course there’s a upper limit to how many refugees a state can handle” and that an honest government might want to include that as part of the discussion — which might have deflated a key part of the AfD’s argument, which was part of her point — they have only urged immediate acceptance of asylum seekers from all corners.

As long as I’m tying former districts of the GDR to The Left, I should mention again that in about two-thirds of the time it took East German border guards to snipe 200 would-be escapees, the Yanks murdered a million Vietnamese. I’m sure both estimates are kind. The GDR took in about 10,000 Vietnamese emigres by the mid-seventies, 60,000 by the time the Wall came down.

Speakin’ o’ the Wall
The Potsdam Conference established the partitioning into US, British, French, and Soviet zones seen in the map above right. Coincidentally, it’s at the lyrical heart of the death strip at Potsdamer Platz (the place named for the road to Potsdam) where the codified corners converge. After the fall, these adjacent spots became the property of Daimler-Benz, Sony, Otto Beisheim, and ABB/Roland Ernst Städtebau.

Daimler-Benz had snagged the largest parcel for so cheap that the stink it caused led to the European Commission’s ordering an additional payment of 34 million Deutschmarks to the Land of Berlin mere months after the initial sale had been completed.

Otto Beisheim was a former Nazi stormtrooper. Did you know that before the war they were the Freikorps (having been renamed after the first war)? Beisheim erected a center in his name, which housed the Ritz Carlton and the Marriott International. Imagine building a tower hotel complex with your own name on it.

Sony built the biggest monstrosity on their place and were rewarded another 4,500 m² by the Berlin Senate as remuneration for having to relocate some of their completed structure, even though it was due to their having disregarded conditions of the contract.

All I can find about Roland Ernst Städtebau is this article from 2011 regarding his arrest on suspicion of graft and fraud.

For Berlin, the massive construction on Potsdamer Platz was their first use of public-private partnerships to get shit done. The Berlin Senate made a show pony out of its design competition, while the players they brought thru the back door would subsequently use threats to get their way around perceived limitations. It was win-win for somebody — in the same way that CETA and TTIP and TISA and whatever subsequent names they may carry will be a win-win for corporations jacked-up on autonomy.

In other words: the politicians will always pretend they don’t know they’re being played as a sure way to hide the fact that they are playing along. That Corporate is seeking to make its authority official should be instructive. It was, already, to the at least 30,000 who took to the streets Saturday in Berlin. But that won’t likely change the outlook of the new senior partner in any coming coalition, the SPD, whose functionaries have, in op eds and on polit-talk shows, newspoken the necessity of precisely these kinds of agreements to any civilized society.

Now the Greens say they are against CETA as well. But if you know the German Greens, well, like I’ve said, coalition building makes for erratic bedfellowing – the subconsci-equences of which might help explain the last odd trend in the electoral map above: The Greens in the middle. They seem to have the strongest constituency in the area where most of the green has made way for concrete.

Speakin’ o’ the Wahl
So how ’bout the numbers?  Well, I am proud to say that at least in one ward in my district the satirical party Die PARTEI beat out the AfD for second to last place. Unfortunately in the ward west of me AfD got just about 11 percent. With any luck, they’ll go the way of the Pirates, who made a big splash last time round but have all but disappeared. 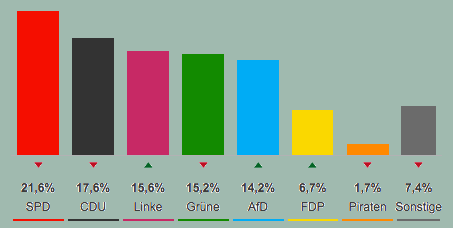 As predicted, the SPD benefited in spite of their bleeding a seat more than the CDU. Unexpectedly, the Left edged out the Greens – but their seat numbers will be the same. Even in light of this, however, I would urge Die Linke not to build a coalition with the SPD and Grüne. There goes the way of losing everything they won here. If they demur, the Greens will go willing with the fake Reds and form a coalition with the CDU just so they can have an office in the administration. And like I said, there goes the way of losing everything they won. But they’ve been doing that cyclically for thirty years now.

Because the only coalition coming from this will have to be more than two parties, the Berliner Zeitung is declaring the authority of the Volksparteien for toast. I think they’re smearing butter.

In closing, here’s the best shot I could get of Die PARTEI walking the opposite direction through the demo Saturday:

34 responses to “Reunited? How the West was One.”