Now I can’t vouch for the veracity of this report at fort-suss.com, but from what I’ve read over the past few days, I find it at least semi-plausible, and besides: it’s a hella lot of fun.

Now keep in mind as you read that the original Maidan may have started as at least a semi-populist movement, but was quickly astroturfed into a regime-change putsch ‘Orange Revolution) once force-multiplier billionaires Omidyar, Soros, and goddess knows how many others controlled it by their massive funding of compromised NGOs to beat the band: NED, USAID, Center UA, New Citizen; so many ‘non-governmental organizations©’ in aid of exporting democracy™ for fun and profit, so little time…  And of course the US State Department’s Deputy Dog for European and Eurasian Affairs: Victoria Nuland (with her sidekick hubbie Robert Kagan) kinda…stage-managed the coup.

To say that this project, another proxy war by other means has been a major flop would be understating it; western media has taken some notice of the Rumbles in the Rada and the NYT (sshhhhh!) made mention that a certain number of er…’neo-Nazis’ marching.  An open secret is and that some have become ascendant in the Ukrainian Parliament, with Svoboda Azov battalion, and Right Sector parades on the street openly. Azov battalion fies under this flag. 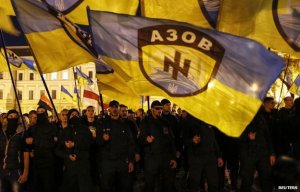 But…but: ‘Putin stole the Crimea (the Bear’s Port of Tarsus, especially)’, leading to separatist federalist declarations, while the billionaires and their minions and corporate resource whores have been licking their chops over the resources of Ukraine, read: all of Ukraine. The IMF’s Madame deFarge had even demanded debt haircuts from bondholders to further seal the deal of pretend sovereign solvency.  (Joyce Nelson’s: ‘Ukraine and Monsanto’ (et.al. plus the members of the US/Ukraine business council; adorable vermin all)

“Ukrainian law enforcement and security agencies are preparing for possible protest actions in the country. A headquarters for responding to a surge of protest activities has been established at the base of the National Security and Defense Committee of Ukraine. This has been confirmed by Ukrainian journalists close to the headquarter’s structures.

Among the planned measures is a crackdown on protest actions and the introduction of martial law in Kiev if the situation deteriorates to armed confrontation.

At the headquarters meeting, the National Security and Defense Committee of Ukraine was instructed to prepare draft legislation on the imposition of martial law and a curfew in Kiev, sources have reported.

The most likely pretext for protests will be the so-called “shock bills”, according to which as of October new prices are to be introduced for heating. Earlier, the Cabinet of Ministers raised them by 75-90%. Now, heating a two-bedroom apartment costs approximately 1,500 hryvnia, while the average salary is in the range of only 5,000 hryvnia. Earlier, authorities also raised the prices for electricity, gas, and cold water. [snip]

“Intelligence services and the SBU have been tasked with investigating evidence of a “Russian trace” in the planned protests. They have also been instructed to look into shutting down TV channels and blocking internet sites.”

Now that sort of living expenses could easily lead to protests, but the rises may just be a way to offset money er…borrowed by the corrupt politicians in office.  But let’s hear (purportedly) former-Banderist Yulia of the blond braids herself:

“Yulia Tymoshenko has urged Ukrainians to take to the streets on November 15th for an indefinite protest action in the center of Kiev. She stated this on Monday, November 14th, during a speech in the Verkhovna Rada.

According to Tymoshenko, Ukrainian President Petro Poroshenko and the National Bank have become a bastion of corruption and the head of state has appointed his business partners to key positions in the country.

“Today only the people can restore justice and put the government in its place. Tomorrow morning, citizens, including pensioners, will go out for an indefinite protest against the devaluation of the hryvnia, the increase in utility costs, and for returning their bank deposits,” she announced.

Tymoshenko also added that the government is calling protesters “the hand of the Kremlin”, while in fact “people are just fed up. “Officials hide behind the war, but they themselves are corrupting and robbing the country. Either the people will unite or the government will simply destroy the Ukrainian nation and Ukrainian state,” she emphasized.”

Now here’s the kicker, and she is echoing the recent thoughts of a few other key elected officials (more on that later):

“Tymoshenko recently stated that even Western Ukraine is starting to think positively about the country’s former president, Viktor Yanukovych. “If they think so in Galicia, then you can only imagine what thoughts people from other regions are having,” she warned.”

Ooopsie.  You remember deposed Yanukovitch the Corrupt, ‘Putin’s BFF’ who fled Ukraine when he realized they (metaphorically) wanted his head on a pike for refusing to sign the EU Association Agreement?  Now here’s some of the backstory to the Yulia polemic.  You’ll remember that the IMF and NATO kinda/sorta told the Ukies that they’d have to clean up governmental corruption for loans, and joining NATO as a full partner; Yulia, et.al. also want to join the EU, or at least sign their ‘Association Agreement’.

As far as I can tell, the protests weren’t massive as per her call this time, but may later if The Braided One can up her game, eh?

“This is what happens when a loose cannon backfires. Eighteen months after he arrived in Odessa promising to reform the notoriously corrupt region, Mikhail Saakashvili has exited his post as governor.

Just over two and a half years since the violent coup/revolution which Western leaders and opinion formers promised would transform Ukraine, nothing much has changed. In fact, things are arguably worse than ever. The economy lies in ruins and the country is divided. Perhaps permanently.

Now another high profile figure has leaped from the sinking ship. And it’s a big beast this time. Mikhail Saakashvili tendered his resignation on Monday and he didn’t depart quietly. Instead, he accused highly-placed officials in Kiev of obstructing his attempts at change.

The timing isn’t hugely surprising either, as ‘Misha’ proved his heart wasn’t in the job last month, when he predicted his imminent return to Tbilisi. This proved yet another delusion, as Saakashvili’s hopes of a victory for his former political movement in Georgia’s general election ran aground. On the contrary, his party was annihilated at the polls.”

Lashing out as before the door hit him in the butt on his way out the door, he’d apparently yelled that “in reality, in (the) Odessa region, the President personally supports two clans” and also compared Poroshenko’s level of corruption to…you guessed it: Victor Yanukovitch.  Poroshenko’s approval rating is down to 10%, apparently, causing MacDonald to muse that the Chocolate Kind might take umbrage at that comparison.  He then chronicles some of Saakashvili’s history, from his military attack on break-away South Ossetia (had John (‘today we’re all Georgins’) McCain played April Glaspie+ in that?) being trounced by the Bear, but this was new to me:

“The following year, in 2009, violent protests against his regime erupted in Tbilisi. As Saakashvili’s rule became more totalitarian, a graphic video showing inmates being sodomized and beaten in Gldani prison sparked more demonstrations.”

His party lost the next election, and he skittered away to the US where he was of course given a hero’s welcome by Western media, then heading to Maidan for another round of power.  Of course it was suggested by Western powers, Bryan MacDonald; like Ahmed Chalabi, the Imperium loves a bad penny returning in various guises!  Much in the same way, it loves ‘convenient’ tyrants and dictators when it’s pragmatic to do so, nor does it mind Nazis all of the time; and sell billions’ worth of weapons system to them as well, I should add.

Saakashvili is Head of the Odessa Region. When the circus comes to town… Poor Ukraine

“And, now, “just like that” as Tommy Cooper used to say, he’s gone. Thus, the immediate question is “where to next?” for our hero.”  (Bryan predicts a dismal future, but who can say?  Misha seems to be rather…malleable, doesn’t he?

Now let’s hear some Twitter Schadenfreude, shall we?  Hold onto your sides.

@MaximEristavi Saakashvili awarded Trump with presidential order of excellence back in 2012, btw. https://t.co/aZA77zFrtz

"The basic longing to live with dignity…these yearnings are universal. They burn in every human heart." —@POTUS pic.twitter.com/jPIgUFssLh

Had you known that Marie L. Yovanovitch was accepted as Ambassador to Ukraine over the summer? What’s Goeff Pyatt doing now?  ack, Simon Wiki says: “He was confirmed as the Ambassador to Greece on July 14, 2016”.  Lucky.Greece.

Yes!  Let’s try some democracy in the ‘homeland’ and NATO, shall we?

"More democracy is…good for our national security. It's why we stand together in @NATO ." @POTUS on our alliances https://t.co/ZMfscnrV7n

““The flame first lit here in Athens never died…fanned by America’s founders, who declared that ‘We, the People’ shall rule” —@POTUS

Ooof, did they tarnish Ukraine’s image?  Nov 15; some things never change; another Rada Rumble, though…smaller than April 2014 below it.  Smile for the cameras! 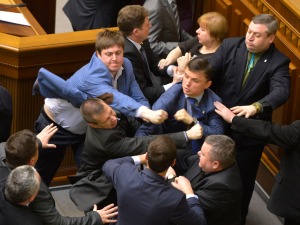 This entry was posted in geopolitical matters, realpolitik, and tagged Schadenfreude, ukraine. Bookmark the permalink.