Catching up with Standing Rock; Update: protectors report that drilling has begun 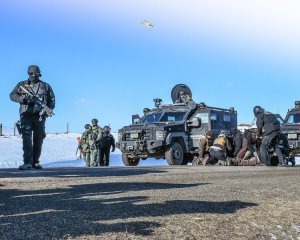 I may have doubled up on a few things, especially the interviews with Jordan Chariton, tra la la.  The tweets will give hint as to what they contain so you can choose which to watch.

From Ladonna Brave Bull Allard from sacredstonecamp.org: ‘To save the water, we must break the cycle of colonial trauma’

“The police came to Last Child Camp in broad daylight, with armored vehicles and guns drawn, to rip our people from our land.  Many water protectors were on prayer walks and in ceremony. We watched from the top of the hill at Oceti Oyate Camp as the troops moved in against them. We sent our prayers to those innocent and brave warriors who came to stand with the people of Standing Rock, and to protect the sacred waters of Unci Maka (Mother Earth).

Then they came for our Sacred Stone Camp, the original spirit camp we built to lay our prayers and our water from the Dakota Access Pipeline.  But this time, they were accompanied by the Standing Rock Sioux Tribal Council.  They had no warrant, but they forced their way onto my private land, my family’s land, where I grew up on the banks of the Cannonball River.  It was our own council members together with the Standing Rock Fish and Wildlife Service, the Bureau of Indian Affairs (BIA), the Bureau of Alcohol, Tobacco, Firearms and Explosives (ATF), and the US Army Corps, all seeking to evict me from my homeland.

The world wants to stand with Standing Rock, but Standing Rock stands against us.  Chairman Dave Archambault threw our people to the dogs when he said the camps’ actions “…do not represent the tribe nor the original intent of the water protectors.”  He forgets that we at Sacred Stone Camp were the first to stand up for the water, and that we stand with all the camps who have joined our struggle.

This movement was started by the people, and led by our youth. The Standing Rock Sioux Tribe’s decision to negotiate with the State and disown the people who came to fight for our water is what could ultimately be our downfall.  We have had many thousands of people ready to stand together in front of those machines.  The Indigenous nations of Turtle Island had united as never before.   But as division grows, it is very difficult to see a path forward.

I could not sleep last night, so I sat and made tobacco. There is something calming in working with red willow, sitting and thinking of those times with Grandma, who has been on my mind a lot. It is wintertime; this is supposed to be the time of stories and passing our history down to the young.

It was this time of year, a century and a half ago, when the “Long Knives” of the military forts and the Indian agents told the people they must either move to the reservations or die (known as the Sell or Starve, Act of February 28, 1877).

Historically, our people’s resistance has been repressed with bloody battles and massacres — but also by the hands of Indian collaborators. Our relatives did not see who the enemy was, because it was their own relatives who turned against them, enabled by the same kind of lies from the same kind of corporate media.

Our traditional leaders were forced aside by the Indian Reorganization Act of 1936, when federal authorities forced the establishment of tribal councils on the reservations.  This is a colonial system of government with no basis in Lakota/Dakota/Nakota culture or teachings.  It is the same tactic they used with the Indian agents and the Hangs Around the Fort betrayals. They fabricate a leader that will allow them to take what they want from us.  The hunger for power can divide a people.

As everyone knows, there are many leaders to this movement, and yet there are none. This is a people’s movement; this is a movement for the water, not owned or controlled by anyone.

Like Red Cloud and Spotted Tail, and the other “agency” Lakota who so quickly surrendered our lands and way of life while thousands fought back alongside Sitting Bull and Crazy Horse, today our tribal council has misunderstood what is really at stake. 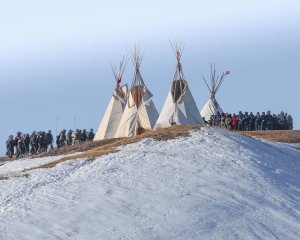 Each one of us is fighting for our grandchildren, and their grandchildren, and for our relatives who cannot speak or fight back. Imagine if we had stood together on October 27th, the day they pushed us out the Treaty Camp we built in the very path of the Black Snake — our most powerful position in this entire struggle. What if our own people had not negotiated away our power? What if our people had not opened the roads and then turned to march against us with outstretched arms, in line with the riot police and armored vehicles?  Why pass resolutions calling federal agents to attack our people and evict the camps as the drill digs beneath our sacred water? How powerful could we be if we agree to stand our ground on our treaty land where we have laid thousands of prayers?

Our ancestors did not abandon the Pȟežísla Wakpá (the Little Bighorn River), when we last unified the Oceti Sakowin and defended our land from the Seventh Calvary; we too must not abandon Mni Sose (the Missouri River). We must not sell our people’s blood, land, and water to uphold the dysfunction we live under now. We have no choice but to break the cycle of trauma so our future generations can have a better life. I believe it starts with the water and ends with the water.  Water is life. Will you stand with us?”

Her last missive reminded us that Hunkpapa Sioux holy man Sitting Bull was killed by his own people, as well.

In this interview with Jordan Chariton of The Young Turks, Chase Iron Eyes tells why some warrior water protectors set up the camp in the photo that was raided, and led to the arrest of 76 protectors.  They weren’t arraigned until the next day, so had had to stay in jail until they bonded out.

The story goes that they were descendants of Crazy Horse who had created a Last Child Warrior Society, and that they had collectively had a vision that they were to leave Oceti Sakowan, move to higher ground west of the camp.  It turned out they were on company land; Chase tried to speak to the po-po, was arrested, and charged with a Class C felony: inciting a riot, as was Vanessa Castle, the maximum penalty for which is five years in prison.  The other 74 were charged with trespassing and rioting.

Read below at Censored News how they were treated on the way to jail; it will make your blood boil.

Below the video: “Live stream provided by Chase Iron Eyes…”In honor of the Last Child Warrior Society, the only such society created by Crazy Horse we are asking all frontliners in camp to come to the high ground west of the Oceti camps to put out a call for others to join this stand. It’s time brothers & sisters. Our conscience won’t let us back down. In the spirit of Crazy Horse. *song by Mercedes Terrance*…”

EXTREMELY TROUBLING comments from the chairman of @StandingRockST #NoDAPL https://t.co/lug1S0aWHv

#StandingRock Elder: "Unreal What The Government Does To Us" #NoDAPL https://t.co/TDIDHkF8NS

Why #DAPL Fight Is About A Lot More Than a Pipeline #NoDAPL https://t.co/X3Twcl0ZdC

from what we’ve heard from ladonna and chase, this seems like crap to me:

Clarification from the Standing Rock Sioux Tribe concerning the cleaning of protest camps near the Cannonball… https://t.co/04CdDT0BKt

but is this anything new, or just DLP dialing for dollars?

FEDS TO CLOSE CAMPS FEB. 22! It is time to mount the resistance, more than ever. Make a donation today and help… https://t.co/jcRSxqk5TN

@ChaseIronEyes Feb 4  “I’m not the chief, the leader. I’m just drawing the line. You all need to look within and find where you draw your line. I’m ready.”

@ChaseIronEyes Feb 5  “I want to walk with compassion. I’m thankful Wakan Tanka grants me the strength to take risks. I must earn my name, I must earn honors.”

@ChaseIronEyes Feb 5  “I wish to be invited to the lodges of the Tokalas & StrongHearts when I get to the star camps.”

This entry was posted in resistance under oppression and tagged #NoDapl, sacredstonecamp. Bookmark the permalink.

28 responses to “Catching up with Standing Rock; Update: protectors report that drilling has begun”