(File under: Permanent history of USian militarized genocide, ecocide, and sociocide against the First Americans.  I’m going to work backward in time; hope it’s not too jarring to your sensibilities  I’m adding things that I’d stuck into comments on the ‘Pleas from Oceti Sakowin’ piece from Feb. 23)

Joye Braun of the Cheyenne River tribe invited the remaining displaced protectors to their powwow grounds at Eagle Butte, SD.  She welcomed them with open arms, said there are showers (no small treat, I’m sure) and restrooms, added that they need help setting up their large tents.

‘We’re here at the Cheyenne River Pow Wow Grounds. New Camp.’  It’s great to hear their laughter in the face of such…pain.

The wind makes the video interview all but impossible to hear, at least for me.  But she assures listeners that embers and ashes from the sacred fire are being sent to HI and other places where Protectors are defending The Sacred.  As in: 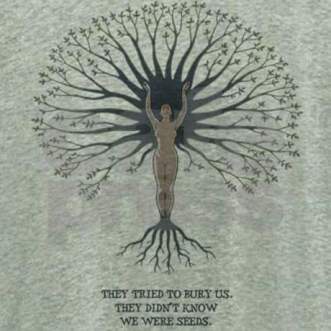 SL Tribune, Feb. 28: “The longstanding Sacred Stone Camp has swelled to about 550 people with the influx of about 150 people this week, according to Joye Braun, a protest leader. But whether that camp and another known as Seventh Generation Rising are on private land or tribal land is in dispute.* Protesters haven’t been able to get into another camp established on private land by the Cheyenne River Sioux because of an Indian affairs bureau roadblock. The Standing Rock Tribal Council also has made it clear it wants all of the camps to shut down.

“We are working with the tribe and the Bureau of Indian Affairs” on an agreement to resolve the situation, Braun said.

Oil could be flowing through the pipeline as soon as March 6, according to William Scherman, an attorney for the pipeline operator.

The company has finished drilling the main hole under Lake Oahe and will soon be laying pipe under the Missouri River reservoir — the last stretch of the 1,200-mile pipeline.”

*Of course LaDonna Allard had already given the BIA the copies of her deed to the land once they said “we know nothin’ ‘bout that claim!”  But as of Feb. 28 the BIA still claimed federal ownership in trust of 2/3 of acreage where #SacredStoneCamp is, and served a trespass notice.

The story on three Unicorn Riot journalists having been cleared of criminal trespassing charges from #NoDAPL arrests https://t.co/InuUWRGewY https://t.co/K48LBXrROM

And this is from Digital Smoke Signals, September, 2016; it’s a good, and brief, representation of the hope, the pain, and the Protectors indomitable spirits.

…and this is historical parallel of his saying that the tribal councils aree acting against The People.  The Ghost Dance and Sitting Bull’s dream, as in: he knew that he’d be killed by his own people.  I rarely say ‘must watch’ or the like, but if one wants to grok the Lakota tribes, it’s key (even if the narrator is Peter Coyote):

Mitakuye Oyasin!  And thank you all for your incredible efforts for humanity, the critters,  and mother earth…for such  long time.

This entry was posted in indigenous global activism, resistance under oppression and tagged #NoDapl. Bookmark the permalink.