Why Are Ferguson Activists Dying? 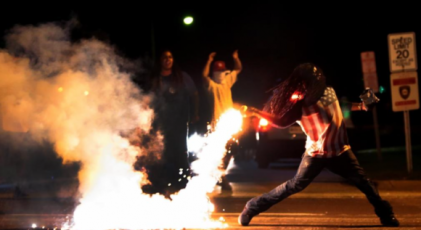 The most iconic photo of the Ferguson, Mo., protests, if not the entire Black Lives Matter movement, is of Edward Crawford defiantly throwing a tear gas canister back at riot police. And now he’s dead.

I’d wanted to post a more philosophical diary that requires more reading than my loaded-up RL obligations allow me for now.  But this hit me hard, and I wanted to let you all know this horrid news in case you hadn’t heard.

From Jason Johnson at the Root: ‘Ferguson, Mo., Activists Are Dying and It’s Time to Ask Questions’, May 5

“Crawford was found shot to death Thursday night in his car, just like activist Darren Seals in 2016 and protester DeAndre Joshua the night of the Ferguson verdict in 2014. The latter two had gunshot wounds to the head and their cars were lit on fire. Crawford, it is believed by police, shot himself in the back seat of his car either in an attempted suicide or by accident.

Given the justifiable lack of trust between local activists, black residents and the police, however, questions remain about this story. In order to bring justice to Crawford, his family and the entire Black Lives Movement, it’s about time we started asking tough questions about their deaths.

Missouri state Sen. Maria Chappelle-Nadal broke the news on Twitter this morning that Crawford had been killed. What was striking is not just the anguish in her tweets but also the details she provides.

Edward Crawford is dead. Found in his car shot to death. He is #Ferguson's hero. For those of us tear-gassed, he was our local champion. RIP pic.twitter.com/RHtBEB174G

Thank you. It is now not coincidental. There is a murderer targeting activists from #Ferguson. #WeAreNotInvisible #Resist https://t.co/cZV8VniCrO

“The St. Louis Post-Dispatch initially noted only that Crawford died of gunshot wounds. It now says that the death was reported to the medical examiner’s office as a suicide, but the medical examiner hasn’t issued an official cause of death yet, pending an autopsy. The Dispatch’s report conveniently leaves out that Crawford’s death is strikingly similar to that of Seals and Joshua, whose deaths were so similar that even the St. Louis Police Department thought they were linked by the same killer.

Chappelle-Nadal, who represents Ferguson and is a firebrand for the Black Lives Matter movement, has been following the tragic story as it happened and has expressed doubts about the cause of Crawford’s death.”  [longish snip]

“As the day goes on and more details trickle out, it doesn’t make it any easier to determine the cause of Crawford’s death, which opens the door to fear, speculation and, potentially, belief that it’s a conspiracy. Why would Crawford, a father of four who, according to his family, appeared to be in high spirits after getting a new job, just kill himself in his car? [wd here: shades of Sandra Bland?]  Moreover, the latest reports are that Crawford was in the back seat and two women were in the front. Suicides are usually committed alone, away from anyone who could possibly prevent the suicidal person from going through with the process. Who were the two women, and what are their full statements about the death?” [snip]

We are in an era where the White House considers Black Lives Matter to be a terrorist organization. Deliberate attacks against black people who are fighting for justice—whether the Rev. Clementa Pinckney of Mother Emanuel African Methodist Episcopal Church in Charleston, S.C., or half a dozen other activists killed by white nationalists in the last decade—are not far-fetched. Regardless of the eventual conclusions about Edward Crawford, St. Louis police have still suggested that the deaths of Joshua and Seals were likely homicides.

School, the post office and the mall will still be open on Crawford’s birthday, and he won’t get a special on PBS narrated by Samuel L. Jackson, but like many forgotten martyrs of the movement, he was a human being, too. Crawford was a dedicated activist for people on the ground who needed someone to stand up for them. Let’s hope that in investigating his death, the local community in Ferguson will fight for him in death as hard as he fought for them in life.”

"I was not throwing it back at police. I was throwing it away from children." Rest in peace, #EdwardCrawford. 😢😢😢 https://t.co/H01Gg9CO41 pic.twitter.com/n65BGPFpQ1

This is another iconic photo from Ferguson:

Rest in Power, Edward Crawford; the world was a better place with you alive.  One day, just maybe, we’ll find out how your life ended.

This entry was posted in black lives movement, resistance under oppression. Bookmark the permalink.

10 responses to “Why Are Ferguson Activists Dying?”