Okay, major Time fail: it’s really Moscow’s Saint Basil’s Cathedral, a landmark Church on Red Square, but why not instead the Knesset or the Presidential Palace in Riyadh?  For one thing, Israel and the Kingdom of Saudi Arabia have been our ‘partners in peace’ for decades, and haven’t ever made it onto any US President’s ‘Axes of Evil’ lists have they?  Oh, and don’t miss that the painting-in-progress is dried blood red.

At least Trump isn't bowing before the Saudis like Obama just so US arms exporters can sell hundreds of billions & destabilize the Mid East. pic.twitter.com/7qhZWz137U

And oh, my, what an easy sell ‘the Rooskies are Enemy No. 1’ to Amerikans.

In Paul Street’s  May 19 ‘How Russia Became “Our Adversary” Again’, after advising for the moment we forget all the ‘the Russians hacked the last election in favor of Donald Trump without any hard evidence’ silliness, he writes that it’s been an enemy of the Western Capitalist elite from the 1917 Bolshevik Revolution to allegedly Marxist-Leninist breakup of the Soviet Union in the 1990s.

Describing the state as holding tyrannical power over Eastern Europe and East Germany, and was no workers’ paradise, still it created an industrialized system that permitted all citizens to be educated, provided health care, housing, and food security, outside capitalism.

“It therefore posed a political and ideological challenge to U.S-led Western capitalism – and to Washington’s related plans for the Third World periphery, which was supposed to subordinate its developmental path to the needs of the rich nations (the U.S., Western Europe, and honorarily white Japan) of the world-capitalist core.

Honest U.S. Cold Warriors knew that it was the political threat of “communism” – its appeal to poor nations and people (including the lower and working classes within rich/core states) – and not any serious military danger that constituted the true “Soviet menace.”

(The USSR also provided) “military and other assistance to Third World targets of U.S. and Western attack (including China, Korea, Indonesia, Egypt, Syria, Cuba, Vietnam, and Laos).  Along the way, it provided an example of independent development outside and against the capitalist world system advanced by the superpower headquartered in Washington.”

Upon the collapse of the Soviet Union in the 90s, Street quotes George HW Bush as having crowed “What we say goes!” in a new unipolar Western Imperial world as Russia turned to a ‘not-so-free-market form of neoLiberal capitalism dictated by DeeCee consensus, and creating a new capitalist oligarchs while everyday citizens suffered from imposed austerity and inequality.

“The bottom line is that proud, post-Cold War Russia finally experienced too much brazen humiliation and betrayal at the hands of the U.S.-led West. It got up off the canvass under national/nationalist strongman Putin (a former KGB Lieutenant-Colonel wise in the ways of the West) and marshaled enough of still-intact natural and military resources and patriotic to challenge the American Empire’s hubristic claim to the right to rule Eurasia with impunity. “What we say goes” hit a new wall of Russian dignity and power.”

And of course Putin’s giving the West his bird finger is a major reason that he’s so popular in Russia.  Now he doesn’t say so expressly, but propagating Cold War 2.0 has also ‘repurposed’ NATO and caused insane expansionism with new members, ‘under out NATO umbrella’ states, and ‘provisional or pending Nato states right up to Russia’s borders.

But oh, yes, Street does indeed see how far the Dems’ shrill cries of ‘Russiagate’ (along with their compliant MSM stenographers) have brought the trope-a-dope to an ear-splitting crescendo, along with neo-con Bear-baiters like John McCrankypants and friends who’v feared any earlier Trump Tweets concerning his desire for rapprochement with Russia.  Can’t have that, nossir!  The epically loud bipartisan screams against that idea is why Street and others believe that “Clockwork Orangutan found it necessary to absurdly tell Russia to “give Crimea back” to Ukraine and why he theatrically launched 59 cruise missiles onto a Syrian airbase.”

I’m not down so much with the latter theory as  there are competing and plausible other reasons for Syria as another proxy war ground zero.  There’s a lot more Street at the link to read if you care to.

From Mike Whitney’s ‘Putin’s New World Order’, April 28 at Counterpunch on why the US political class loved ‘buffoon’ Yeltzin but not Putin (I might have said ‘fears Putin, myself):

“Putin has repeatedly condemned Washington’s unilateral war-mongering around the world, in fact, the Russian president has become the de facto leader of a growing resistance movement whose primary goal is to stop Washington’s destabilizing regime change wars and rebuild global security on the bedrock principle of national sovereignty. Here’s how Putin summed it up at Valdai:

‘We have no doubt that sovereignty is the central notion of the entire system of international relations. Respect for it and its consolidation will help underwrite peace and stability both at the national and international levels…First of all, there must be equal and indivisible security for all states.’

“Putin’s opposition to unipolar world rule, that is, Washington dictating policy and everyone else falling in line, is not a sign of anti-Americanism, but pragmatism. Washington’s 16 year-long rampage across Central Asia, North Africa and the Middle East, has only intensified crises, fueled instability, bred terrorism, and increased the death and destruction. There have been no victories in the War on Terror, just endless violence and mountains of carnage. On top of that (as Putin says) “No one feels safe.”

Say what you will about Putin and Lavrov (and they have plenty of detractors), but as far as I’ve seen, there are no other current Statesmen who are anywhere near their equals.

Now we also need to bring Julian Assange and WikiLeaks into the equation, don’t we?

‘Sweden’s investigation into Julian Assange was a political frame-up from the outset’, 20 May 2017, wsws.org

“On Friday, Swedish authorities announced they were dropping their investigation into sexual misconduct allegations against WikiLeaks co-founder Julian Assange. In fact, they have no case whatsoever and never did. The entire affair was a “dirty tricks” operation from the outset, aimed at discrediting and paralyzing WikiLeaks and creating conditions under which Assange could be extradited or abducted to the US, to be executed or condemned to a lifetime in prison.

WikiLeaks’ sole “crime” was to shed light on the illegal and murderous activities of American imperialism and its allies in Iraq, Afghanistan and around the globe.”  [snip]

“The US has let it be known that it has prepared charges against Assange, and Washington would like to see Assange extradited to the US. The British authorities, moreover, said they would still arrest Assange if he left the Ecuadorian embassy, where he has been trapped for five years, for a breach of bail offense.

He then lists a boatloads of them.  There are many competing narratives as to who leaked the DLC cables, but ‘an insider’ gets my vote (Craig Murray, et.al.). 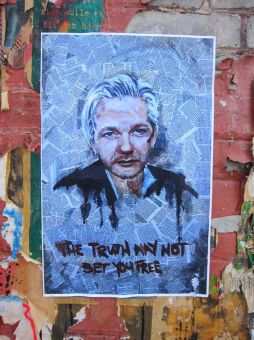 John Pilger’s verrrry lengthy May 19 ‘Getting Assange: the Untold Story’ doesn’t relate to Russiagate, but as it contains some major f’ed up history that I’d been totally in the dark about, but this bowled me over:

“The previous editor of the Guardian, Alan Rusbridger, called the WikiLeaks disclosures, which his newspaper published, “one of the greatest journalistic scoops of the last 30 years”. Yet no attempt was made to protect the Guardian’s provider and source. Instead, the “scoop” became part of a marketing plan to raise the newspaper’s cover price.

With not a penny going to Assange or to WikiLeaks, a hyped Guardian book led to a lucrative Hollywood movie. The book’s authors, Luke Harding and David Leigh, gratuitously described Assange as a “damaged personality” and “callous”. They also revealed the secret password he had given the paper in confidence, which was designed to protect a digital file containing the US embassy cables. With Assange now trapped in the Ecuadorean embassy, Harding, standing among the police outside, gloated on his blog that “Scotland Yard may get the last laugh”.

This entry was posted in empire and war crimes, psyops and propaganda. Bookmark the permalink.

22 responses to “The Kremlin Now Owns the White House”