Look Out Venezuela, the Usual Suspects are Comin’ after You (and your oil)…Again

VZ as seen thru MSM

I won’t blame you if you’ve grown tired of my tirades against the constant siege against VZ, Bolivarism, and Chavismo for the past ten years, but this coup, soft or otherwise (R2P, perhaps?) just may succeed.  There’s no doubt that Nicolás Maduro has taken a lot of wrong steps to get to this point, but many of those missteps were the results off panic, imo.

(the transcript is here.)  If you read nothing else in the diary, please read Abby’s account; she and her partner Mike put their lives on the line to bring us her non-Imperial and compromised ‘human rights NGOs’ reporting.

Abby Martin: “Yeah, and to give some context to this, I mean, to really explain the violence that the opposition is carrying out and the complete absence of commentary on this violence from these watchdogs, Sharmini, I mean, we’re talking about these protestors that have attacked hospitals, burned down government buildings. They burned down the Housing Ministry, which has provided 1.6 million homes for poor people over the last decade. Political assassinations. I mean, directly assassinating Chavistas, attacking communes. We visited one building that was, all the windows were broken. It was just simply an art commune that gave out free dance lessons and music lessons to local kids. I mean, it’s kind of sick when you see on the front lines what is being attacked and why, what is the political motivation behind these lynch mobs. Before I get into the story that happened to us and what’s going on to journalists, I mean, you mentioned that young man, Orlando Figuera, that was burned alive.

This is the third Afro-Venezuelan who has been lynched, attacked by a mob during these protests, black, and the clip with his family being interviewed, and even him before he tragically died from his severe burns. He said that they said, “Hey, black guy, are you a Chavista?” And they threw a Molotov cocktail on him. I mean, they have pulled bus drivers out of the buses and torched the buses. They, throwing explosives at people, so it is just quite astounding not only is that happening, but then when you look at what happens to journalists there. Before we went, of course, we heard even Reuters journalists had been attacked by these people, but we know how dangerous it is to be a state-run journalist there, Sharmini, which is why we didn’t say that we were openly with teleSUR.”

The comment section is being heavily trolled by a man named ‘Carlos’.

Ah, but Matt Taibbi might fight the Vampire Squid well, but now he’s also fighting  for the Empire:

“Who says two amoral and corrupt institutions with diametrically opposing ideologies can’t collaborate to sink even lower together?

Maduro’s authoritarian government has been rocked by protests this spring thanks to widespread economic and political devastation. (Maduro blames his country’s problems on an “economic war” waged by Washington.) The most shocking statistic is that 75 percent of Venezuelans are said to have lost at least 19 pounds from food shortages.

The Goldman deal was a win-win for the bank and the dictator. Goldman bought $2.8 billion worth of oil bonds for 32 cents on the dollar, according to the Times of London. Maduro’s regime, in return, immediately gets to stock its coffers with about $865 million.

Julio Borges, president of the National Assembly and a leading opposition figure, denounced Goldman for “aiding and abetting” the goblin of Bolivarian socialism:

“Goldman Sachs’ financial lifeline to the regime,” Borges wrote in a letter to Lloyd Blankfein, “will serve to strengthen the brutal repression unleashed against the hundreds of thousands of Venezuelans peacefully protesting for political change in the country.”

Borges added that he believed Goldman “decided to make a quick buck off the suffering of the Venezuelan people.”

Well, you get the drift.  But given the fact that Maduro thinks that it’s his and VZ’s duty not to default on payments to the IMF for past loan shark loans, that may be where the money went…not into his pocket, Mattie.  And F, you, Taibbi, by the by, for not checking into what’s been up in VZ for a decade or more, but just parroting the same old MSM bullshit.  Forbes?  OMG; aren’t you just adorable?

He even quotes past-putsch leader Henrique Capriles via the Miami Herald:

“”Why do they need this money?” Capriles wondered. “To buy bombs and war supplies that are running out? To finance a fraudulent electoral campaign?”

‘A Response to Rolling Stone’s Matt Taibbi on Venezuela’, Joe Emersberger, venezuelanalysis.com, June 7th 2017   (Embersberger attempts to educate Taibbi, and at least one commenter under Taibbi’s hit piece brought the link.)  Well, sure, let’s hear from Bloomberg again, while we’re at it… 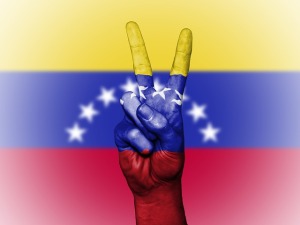 “I just had a disastrous and embarrassing interaction with Bloomberg, and feel that I was ambushed and sandbagged by having my comments taken out of context in a hit piece Bloomberg’s journalists wrote on Venezuela – evidently trying to distort my own views in a two-for-one job.”

After narrating the bizarre opacity with ‘journalist’ Christine Jenkins at length, especially having told her that he really wasn’t up on circumstances in VZ but had commented often as to inadvisability of nations perpetrating austerity on citizens due to bonds held by foreign investors, nor had he ever been in contact with Maduro, he writes:

“I was appalled to find the article a hit-piece on Venezuela, and to make me appear to criticize President Maduro by implying that the country is not helpable. I never said that I was not “a fan of the socialist leader.” I applaud his attempts to maneuver as best he can within the corner into which Venezuela has been painted. I did indeed repeat the headlines of the day – that the country “has entered a period of anarchy.” There were riots going on, and a constitutional crisis led to the Supreme Court suspending its congress. That wasn’t a criticism, just my “umm-hmm” comment on what the reporter was telling me about the situation.

Venezuela has made herculean efforts to pay its bondholders in recent years. This has been a political decision to avoid the even deeper problems that default would cause. I’m in no position to second-guess President Maduro or other Venezuelan policy makers. They’ve probably steered the best course available to them – bad as the choices are.”

Will we be hearing hits on Maduro’s ‘dictatorship’ soon from George Clooney and his pals at CFR soon?  I just checked; a very reasonable-sounding (at the top) hit piece with even some truth in it.  ;-)  And of course, Zimbabwe is on their ‘concern-trolling interventionist cuz ‘that’s our job!’ list.

The sharp decline in oil prices in recent years has crippled Venezuela’s economy. Get the background on the crisis: https://t.co/5XBLe0HCD3

What will happen the "day after" in #Zimbabwe? Read our new contingency planning memo update to learn more: https://t.co/d15sft2iaq

“In April, Kurt Tidd, US Southern Command chief submitted a report to the senate warning that Venezuela could be a “destabilizing” element for the region.

The United States Southern Command began military exercises Tuesday with 18 other nations and about 2,500 soldiers on the island of Barbados, 670 miles from Venezuela’s coast.

According to the Commander of the U.S. Southern Command Kurt W. Tidd these military maneuvers ensure the security of the region. However, the military force has been accused of intervening and threatening governments in the region, such as Venezuela.

In April, Tidd submitted a report to the U.S. Senate warning that Venezuela could be a “destabilizing” element for the region. The official’s statements have been denounced by the Venezuelan government amid other actions by the U.S. to put pressure on the South American country, including OAS attempts to apply the Democratic Charter against Venezuela, led by Secretary General Luis Almagro.”

But in case you might have doubted that #TradeWinds was just practice for emergencies, US Southern Command retweeted this generous USian largesse today:

Today is Day One of the Conference on Prosperity and Security in Central America. Visit https://t.co/OlJB7B7w4l for updates #CentAm2017

“U.S. Secretary of State Rex Tillerson said Wednesday that Washington is working on a “very robust list” of individuals in Venezuela to target in expanding U.S. sanctions against the country.

Tillerson said the State Department was working with the Department of Treasury to sanction the South American nation for what he said were human rights violations. The former ExxonMobil head spoke during a U.S. House Committee on Foreign Affairs.

Tillerson responded to Republican member of Congress Ileana Ros Lehtinen, who asked him to include more “human rights violators” in the sanctions against Venezuela as months of violent protests in the country have left more than 80 people dead.

The official recalled that last month the Treasury already imposed sanctions on several members of Venezuela’s Supreme Court after declaring the National Assembly in contempt.”

Ileana Ros Lehtinen was born is Cuba; did her family repatriate to Miami post-Castro?  She’s fervently anti-Maduro, as are many, if not most of her constituents.  “U.S. businesses should be avoiding deals with Maduro like the plague,” Ros-Lehtinen said.” (with video from the House floor)

“As the dirty war against the Venezuelan people unfolds at a swift and ruthless pace, the best accounts and analysis are not available in English. The report below is an example of critical information that we need today.  I am confident that readers can both understand what is said and make allowances for the fact this is run through a translator.

A new star has been born on the scrawny firmament

It’s very long, and it includes photos and videos, but it’s again a bullshit psyop like the ‘award-winning’ Syrian White Helmets.  The exposé urges readers to follow the funding, the desire for  ‘heroes’ in a story narrative, the political ties shaping the message, the public’s need for spectacle…but if you’re so inclined, click in to see which bolded headings might prick your interest.

“Jailed Venezuelan opposition leader Leopoldo Lopez has openly called on the military to rebel, continuing a longstanding trend of right-wing coup mongering in the South American country aimed at forcing the government of President Nicolas Maduro out of office.

“To the soldiers who are on the streets today I want to send a very clear, calm message framed in our constitution,” Lopez said on a video published on his Twitter account. “You also have the right and duty to rebel, to rebel against orders that seek to repress the Venezuelan people. “

Lopez recorded the video inside the Ramo Verde prison where he is imprisoned since 2015 for inciting violence in the street barricade protests, known in Venezuela as “guarimbas,” in 2014 that led to the deaths of 43 people. He was sentenced to 13 years for his involvement in planning and promoting the violent blockades which injured hundreds and caused billions of dollars in damages to public buildings and infrastructure.

“Say no, say it is not your duty or even an order that you must comply with,” Lopez said.”

He (Lopez) had also participated in the attempted coup against Chavez in 2002, including being caught on video illegally detaining then Minister of Interior and Justice Ramon Rodriguez Chacin during the failed ouster.”  there’s more, of course.

Meanwhile, Nicolás Maduro has appealed to the Pope to help negotiate…peace  (?)

Min of Housing opposition rioters set on fire, has built and delivered 1.6 million units of social housing – opposition hates it!

The Need to Radicalize the Bolivarian Revolution by @marxistJorge for @telesurenghttps://t.co/lwtT8SQUGq

''The Venezuelan opposition does not want democracy or elections'' – an interview with Jorge Martin https://t.co/UfJnYdrvY5

Like Loading...
This entry was posted in capitalism and anti-capitalism, compromised NGOs and non-profit industrial complex, shock doctrine control and profiteering and tagged Venezuela. Bookmark the permalink.

24 responses to “Look Out Venezuela, the Usual Suspects are Comin’ after You (and your oil)…Again”