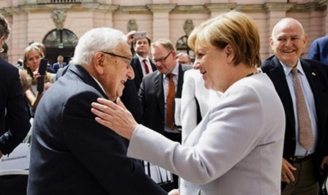 I wasn’t able to contact the author to ask for permission, and hope that he won’t mind my re-blogging his entire comdenation; I really didn’t want to edit out anything, as it was all of a piece.

“After a tumultuous week which brought a number of nasty shocks and alarms, including the shooting down of a Syrian jet by the United States military in Syria, spiraling tensions, and fears of direct US-Russian confrontation in the Middle East, on Wednesday evening yet another horror story jumped off the screen and out of the evening news on German public radio to slap me in the face with the full force of its repellent vulgarity. The most infamous and despicable living war criminal, America’s Henry Kissinger, was once again being honored and treated as a wise elder statesman by a major world figure who claims to be an advocate of human rights and justice.

The occasion was a ceremony commemorating the 70th anniversary of the Marshall Plan in Berlin, where the depraved one was allowed to represent his adopted country, as it was thanked for helping to rebuild Germany following the Second World War.

I could feel my blood pressure rising, as it does every time I see this poisonous creature fawned over by powerful and influential “leaders” who purportedly stand for human rights, justice and democracy. Whether it is Hillary Clinton, who referred to the mass murderer during her presidential campaign as a “great friend of democracy” – the same man who helped put in power dictators such as Chile’s General Augusto Pinochet, overthrowing a democratically-elected leader in the process and ushering in years of torture, murder, and repression, to name only one in that category – or Ms. Merkel, who loves to talk about the “shared values” of NATO and European Union members, but dallied with Kissinger embarrassingly this week before cameras in apparent blissful, willful obliviousness to his bloody record; or Barack Obama, who, in a moment of stupendous and supreme Orwellian shock theatre, awarded the world’s most famous war criminal the “Distinguished Public Service Award” a couple of years back: Kissinger is courted by heads of state and major power brokers as if he had made the world a better place, instead of being a major player in the initiation of the events that have produced today’s spreading chaos and grim death watch for our planet.

“Realpolitik”, they call it, and no one is more strongly associated with that term than the malevolent old German by birth, born Heinz Kissinger, who as a Jew fled from the Nazis in 1938 and emigrated to America. Among his famous quotes are such unforgettable classics as ‘There are no permanent friends, only permanent interests,’…’The illegal we do immediately; the unconstitutional takes a little longer,’ … ‘… and if they put Jews into gas chambers in the Soviet Union, it is not an American concern. Maybe a humanitarian concern,’…’It is an act of insanity and national humiliation to have a law prohibiting the President from ordering assassination,’… and the refreshingly candid “Military men are just dumb, stupid animals to be used as pawns in foreign policy.’

For years, as National Security Adviser and Secretary of State during a crucial and formative period in modern American history, he acted vigorously upon those chilling Machiavellian principles with results that have only grown more apparent and damning in the historical perception of anyone willing to trace the development of the current status quo. No brutal strongman was too nasty to merit US support if it was considered necessary in terms of preventing the spread of socialism and achieving the aims of United States Realpolitik. “Democracy” and “freedom” were public relations terms for domestic American consumption only. Kissinger did not only support and shake the hands of tyrants, he smiled broadly and convincingly for the cameras while doing so. His sincerity was only too obvious.

After spending much of my adult life as an expatriate living in Germany, I find such encounters not only horribly depressing, but increasingly revealing regarding the true nature of the European governments which I once considered far more enlightened than the American ones under which I grew up. The death penalty was abolished here long ago. I found post-war Germany’s historical policy of giving asylum to foreigners threatened by political persecution to be a noble sign of atonement for its Nazi past, even if its support for Israel in the face of decades of war crimes and military occupation of Palestine was the morally corrupt downside of that atonement. The environmental policies here which once looked so progressive, in comparison to America’s absolute refusal to take any meaningful steps to prevent the coming disaster, now stand revealed as window dressing and fig leaves, as Trump’s environmental apostasy has given Europe an opportunity to revel in its comparative enlightenment, although the practical effects of that superior approach will be just as non-existent.

Although Merkel was always maddeningly conservative on all issues related to the American alliance – refusing to criticize the war in Iraq, for example, when she was CDU party leader but not yet Chancellor, even as the Schröder government of Social Democrats and Greens refused to participate in that war and vocally condemned the invasion; and quickly changing the subject following the brief NSA scandal associated with the Snowden revelations, after it was revealed that her personal cellphone had been tapped, and she had pretended that the German government was not involved in such activity itself (now known to be pure deception) – she nonetheless represented her conservative party’s left wing. I have defended her against charges that her actions at the height of the massive refugee influx into Europe two years ago were not based on sincere compassion, and on a desire to help desperate humans fleeing from war zones where survival was increasingly dangerous and difficult. She took on her party’s right wing and much of the EU, and risked her political future for quite some time. But now, Kissingerian Realpolitik is once again ascendant as she runs for her fourth term in the Chancellor’s office.

On Thursday, German media ran multiple reports that her government will again begin deporting Afghan refugees who are rejected for asylum back into the war zone, where multiple recent terrorist attacks have taken place in the capital of Kabul, which the German government had until recently designated as “safe” along with other regions of the country (although these claims have been hotly contradicted by groups and organizations active there). A few weeks ago, as a planeload of Afghans was about to take off from Berlin for Kabul, a major attack in the direct vicinity of Afghanistan’s German embassy, which killed some 150 persons, exposed the true nature of that cynical assertion. The flight was canceled and the government said it would review the situation. Now, a few weeks later, they are about to resume the deportations.

The election campaign is in full swing: in September, national parliamentary (Bundestag) elections will take place.  All polls show that many right-wing, racist and xenophobic voters who had deserted Merkel’s CDU in anger over her refugee policy, to support the far-right Alternative für Deutschland (AfD), are now returning to the CDU in the wake of her near-reversal on refugee issues. The refugee issue and the issues of terrorism and “domestic security” (“innere Sicherheit”) are all being linked in her party’s campaign, and fear of foreigners is being consciously and deliberately nourished. The 600 to 700 attacks on refugees and migrants by vicious, xenophobic thugs which take place in Germany each year have disappeared from the news: apparently violent neo-Nazis and their fellow travelers are not considered to be a threat to that domestic security.

I thought about all of these things as I looked at the photo from Berlin of Merkel smiling and shaking hands with a buoyant Kissinger, her other arm on his shoulder, in what struck me as an odd combination of Realpolitik-groupie behavior and condescending courtliness. The shame that I feel as an American citizen for the foreign and military policy carried out in my name for many years by the repulsive Kissinger and his brutal ilk was accompanied by growing anger — over the huge gap between the rhetoric and stated ideals of the European Union as contrasted with the reality of its policies; the walls and the barbed-wire fences being built in Southern Europe; the new legal walls and corrupt deals being built to keep the world’s most desperate victims of war and poverty as far away as possible; the continued alliance with the power responsible for much of that war, and the taboo against speaking about the real causes of a large part of the refugee crisis; the infuriating cooperation in the campaign of lying propaganda against Russia, and the refusal to admit that European, American, and NATO mistakes and duplicity are responsible for the New Cold War (as in the case of the United States they were, largely, for the original Cold War); and over the glib designation of those of us who oppose these policies as “extremists”, while those who practice this deadly and disastrous Realpolitik are nonetheless presented as responsible and prudent statemen and citizens who uphold the noble values upon which NATO and the EU are allegedly based.

Any head of state who claims to believe in human rights, peace, and democracy makes a mockery of every word when they honor the depraved Henry Kissinger who, in spite of the best efforts of the late Christopher Hitchens and many others, has yet to stand trial for his unspeakable crimes.  Merkel looks to be well on her way to proving herself a worthy disciple.”

Warning: Dark, dark, evil reading ahead.  Enter at your own risk.  Seriously.

Via AP: ‘You can hear the screams: Inside Yemen’s secret prisons’;  The United Arab Emirates and Yemeni forces run a secret network of prisons where prisoners are brutally tortured. The U.S. has questioned some detainees, and have regular access to their testimony — a potential violation of international law. (June 21)

“They call it the “grill”: The victim is tied to a spit like a roast and spun furiously within a circle of fire. It is just one of the terrors inflicted by interrogators on detainees in Yemen who are routinely beaten with wires and were kept in filthy shipping containers, blindfolded for months — all by one of America’s closest counterterrorism allies.” [snip]

“American defense officials confirmed Wednesday that U.S. forces have interrogated some detainees in Yemen but denied any participation in or knowledge of human rights abuses. The American officials confirmed that the U.S. provides questions to the Emiratis and receives transcripts of their interrogations. A Yemeni witness of American interrogations also told the AP that no torture took place during those sessions where he was present.”

Still, the American role raises potential concerns about violations of international law. Obtaining intelligence that may have been extracted by torture inflicted by another party would violate the International Convention Against Torture, which prohibits complicity, said Ryan Goodman, a law professor at New York University who served as special counsel to the Defense Department until last year.

Washington has long relied on allies to help it gain intelligence in the fight against al-Qaida. The UAE has been so key that Defense Secretary James Mattis praised it as “Little Sparta” for its outsized role in fighting the militants. The UAE government in a statement to the AP denied that any secret prisons exist or that torture takes place.”

See our legal analysis of this disturbing and important AP report by @steve_vladeck:https://t.co/amJrAXBNy5

From AP: ‘No Tapes after all; Trump Says he didn’t record Comey Talks’

And just to concretize the mental image for all of us: 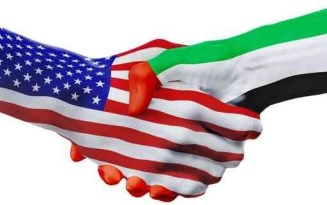