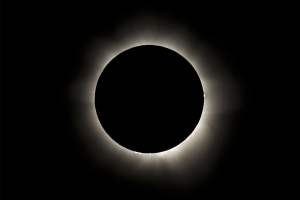 “On Monday, August 21, 2017, all of North America will be treated to an eclipse of the sun. Anyone within the path of totality can see one of nature’s most awe inspiring sights – a total solar eclipse. This path, where the moon will completely cover the sun and the sun’s tenuous atmosphere – the corona – can be seen, will stretch from Salem, Oregon to Charleston, South Carolina. Observers outside this path will still see a partial solar eclipse where the moon covers part of the sun’s disk. NASA created this website to provide a guide to this amazing event. Here you will find activities, events, broadcasts, and resources from NASA and our partners across the nation.”

This celestial event is a solar eclipse in which the moon passes between the sun and Earth and blocks all or part of the sun for up to about three hours, from beginning to end, as viewed from a given location.  For this eclipse, the longest period when the moon completely blocks the sun from any given location along the path will be about two minutes and 40 seconds.  The last time the contiguous U.S. saw a total eclipse was in 1979.” 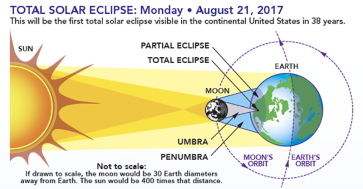 There are tabs for live video streams, eclipse weather, eclipse traffic (due to ‘events’ and watching, viewing safety, science, FAQ, and more.

.@NASAVoyager 2 launched 40 yrs ago today! It's now exploring the heliosheath, the edge of the Sun's magnetic bubble https://t.co/taTdYefUZy pic.twitter.com/EoOB4x8NQh

Click any location on our interactive #Eclipse2017 map to find out eclipse times & type: https://t.co/VHNcvz0SPE pic.twitter.com/HFAE48POV6

Find out exactly how long #Eclipse2017 —
partial and total phases —
will last in your location with our map: https://t.co/VHNcvzitHc pic.twitter.com/NSIA5Muhke

During #Eclipse2017, the Moon blocks the solar radiation that creates the charged particles of the ionosphere: https://t.co/2OSLoydVMM pic.twitter.com/qJ1livvXhC

One science team will chase the Moon's shadow with two jets during #Eclipse2017 to study the Sun & Mercury: https://t.co/xgY13weAvq pic.twitter.com/4O3Z01l7Qb

.@GeorgeTakei has some tips for viewing the #eclipse on Monday: https://t.co/JqsuM4gded #Eclipse2017

No #eclipse glasses? You can still watch #Eclipse2017 by making your own pinhole projector! https://t.co/EHx37WMXc5 pic.twitter.com/7JNqKlJn5t

“The ancient Greek astronomers had also great knowledge of eclipses.

A fragment of a lost poem by Archilochus (ca. 680–645 BCE), who was a Greek poet and soldier, seems to clearly depict a total solar eclipse:

Nothing there is beyond hope,
nothing that can be sworn impossible,
nothing wonderful, since Zeus,
father of the Olympians,
made night from mid-day,
hiding the light of the shining Sun,
and sore fear came upon men.

Herodotus, the father of history, who lived in the 5th century BC, cited that Thales (ca. 624-547 BCE), the Greek philosopher, predicted the solar eclipse of 28 May 585 BCE that put an end to the conflict between the Lydians and the Medes.  Herodotus wrote:

… day was all of sudden changed into night. This event had been foretold by Thales, the Milesian, who forewarned the Ionians of it, fixing for it the very year in which it took place. The Medes and the Lydians when they observed the change, ceased fighting, and were alike anxious to have terms of peace agreed on.”

“In Vietnam, people believed that a solar eclipse was caused by a giant frog devouring the Sun, while Norse cultures blamed wolves for eating the Sun.

In ancient China, a celestial dragon was thought to lunch on the Sun, causing a solar eclipse. In fact, the Chinese word of an eclipse, chih or shih, means to eat.

According to ancient Hindu mythology, the deity Rahu is beheaded by the gods for capturing and drinking Amrita, the gods’ nectar. Rahu’s head flies off into the sky and swallows the Sun causing an eclipse.

Korean folklore offers another ancient explanation for solar eclipses. It suggests that solar eclipses happen because mythical dogs are trying to steal the Sun.

Traditionally, people in many cultures get together to bang pots and pans and make loud noises during a solar eclipse. It is thought that making a noise scares the demon causing the eclipse away.” 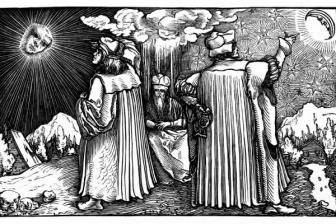 The word ‘eclipse’ comes from ekleipsis, the ancient Greek word for being abandoned.

This entry was posted in astronomy/cosmology. Bookmark the permalink.