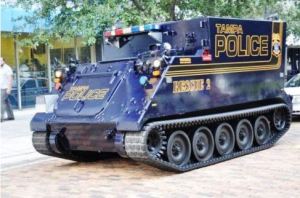 “You are the thin blue line that stands between law-abiding people and criminals—-between sanctity and lawlessness. You protect our families, our communities, and secure our country from drugs and violence. The vast majority of our country appreciates what you do. In fact, just a few weeks ago, Gallup released their annual poll, which showed that overall confidence in the police has risen to 57 percent this year. That is a testament to the work you do every day.

But some would undermine this support by portraying law enforcement officers as the enemy. Instead of recognizing that the Justice Department vigorously prosecutes officers in the cases when they violate the civil rights of our citizens, they choose to slander all of the honorable men and women in law enforcement who serve every day with professionalism, integrity, and selflessness.

Their divisive rhetoric treats police officers like the problem, instead of the crucial allies that you all are. So it can come as no surprise when we see rising levels of violence against law enforcement.”

“President Trump is serious about this mission. He is doing all he can to restore law and order and support our police across America. And that is why, today, I am here to announce that President Trump is issuing an executive order that will make it easier to protect yourselves and your communities. He is rescinding restrictions from the prior administration that limited your agencies’ ability to get equipment through federal programs, including life saving gear like Kevlar vests and helmets and first responder and rescue equipment like what they’re using in Texas right now.

Some of these programs, like the Department of Defense’s 1033 program that Congress signed into law more than 25 years ago, have recycled more than $5.4 billion in used gear and equipment that taxpayers had already purchased, and made it available for your agencies to repurpose it in the fight against terrorism, crime, and disaster relief. Equipment like helicopters and armored vehicles are also vitally important to emergency and disaster response efforts.

One sheriff told me earlier this year about how, due to the prior administration’s restrictions, the federal government made his department return an armored vehicle that can change the dynamics of an active shooter situation. These are the types of helmets and gear that stopped a bullet and saved the life of an officer during the Orlando nightclub shooting. This is the type of equipment officers needed when they pursued and ultimately killed terrorists in San Bernardino. Studies have shown this equipment reduces crime rates, reduces the number of assaults against police officers, and reduces the number of complaints against police officers.

Those restrictions went too far. We will not put superficial concerns above public safety. The executive order the President will sign today will ensure that you can get the lifesaving gear that you need to do your job and send a strong message that we will not allow criminal activity, violence, and lawlessness to become the new normal. And we will save taxpayer money in the meantime.

Roughly translated, the FOP’s motto means “Law is a Safeguard of Freedom.” I would go one step further by saying that rule of law is the safeguard of freedom. The law secures our God-given rights, and you – the officers who enforce it – ensure that all Americans enjoy those rights.

The Department of Justice and the Trump Administration are proud to stand with you as you continue to do this honorable work.  We have your back and you have our thanks.  Thank you, and God bless you.”

Usatoday.com had the story this way in part:

“The new plan takes effect immediately and fully rolls back an Obama administration executive order that blocked armored vehicles, large-caliber weapons, ammunition and other heavy equipment from being re-purposed from foreign battlefields to America’s streets.

The administration’s action, first disclosed by USA TODAY, would restore “the full scope of a longstanding program for recycling surplus, lifesaving gear from the Department of Defense, along with restoring the full scope of grants used to purchase this type of equipment from other sources,” according to a administration summary of the new program recently circulated to some law enforcement groups.

The FOP and some other law enforcement groups have long been pressing for a reversal of the Obama administration policy, arguing that access to such equipment was needed, especially in cash-strapped communities, to better respond to local unrest.

Civil rights advocates, however, warned that the program’s reinstatement threatened to inflame tensions in minority communities where such equipment has been deployed in the past.” [snip]

“Local access to the high-powered gear was put on national display in 2014 in Ferguson, Mo., where armored vehicles and heavily-armed police clashed with protesters for days following the police shooting of an unarmed 18-year-old black man by a white officer.

The deployment of such equipment, President Obama argued at the time, cast the police as an “occupying force,” deepening a divide between law enforcement and a wary community.”

The Task Force on 21st Century Policing bullshit was referenced, ‘avoid the appearance of a military occupation’, etc.  But dig it:

“The previously-banned equipment also included tracked armored vehicles, bayonets and grenade launchers. The Obama order did allow for the limited use of other surplus — aircraft, wheeled tactical vehicles, mobile command units, battering rams and riot gear — on the condition that such equipment was approved by the federal government.”

Oh, yeah; the gummit would block it…on a cold day in hell.  But hold the phone; from Aug. 2, 2016’s ‘Police ‘merikan Citizens without Grenade Launchers and Tracked Tanks? Unthinkable!’

“…just after the sniper shot five police in Dallas, Jim Pasco, executive director of the Fraternal Order of Police, and Bill Johnson, executive director of the National Association of Police Organizations told Reuters that they and six other heads of police associations met with Obama at the White House.  He agreed to review their requests for reinstating those ever-so-crucial military items to the 1033 program.  For one thing, in certain situations, like Dallas, the po-po just couldn’t protect the police state protestors from…the sniper adequately. In some wars on citizens, wheeled tanks just won’t cut it: 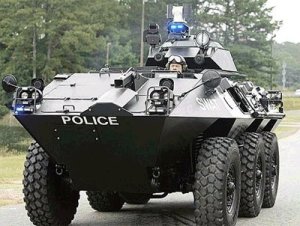 Now to be fair, what Reuters reported was that they couldn’t protect themselves adequately, but some reports had claimed the former silliness.  Three days later, three cops were killed in Baton Rouge.  What do you think his administration will decide?

While speaking to the three authors at Reuters:

“The White House thought this kind of gear was intimidating to people, but they didn’t know the purpose it serves,” said Pasco, noting a grenade launcher can also launch tear gas for crowd control.”

So, see?  As a bit of extra enticement, Pasco showed the Prez that grenade launchers are actually not just for launching grenades, but can serve dual purposes. Whew; I’m glad to know that, aren’t you?  My tax dollars have more breadth and depth than I’d realized. Reuters made no mention of Obomba’s having curtailed the weaponized drones formerly given to police, however.

And from Glen Ford:

“A recent study shows that, under the Pentagon’s 1033 program, enacted in 1997, the value of military weapons, gear and equipment transferred to local cops did not exceed $34 million annually until 2010, the second year of the Obama administration, when it nearly tripled to more than $91 million. By 2014, the year that Michael Brown was shot down – and when the full Congress, including 32 members of the Congressional Black Caucus, rejected a bill that would have shut down the 1033 program – Obama was sending three quarters of a billion dollars, more than $787 million a year, in battlefield weaponry to local police departments. In other words, President Obama oversaw a 24-fold (2,400%) increase in the militarization of local police between 2008 and 2014. Even with the scale-back announced in 2015, Obama still managed to transfer a $459 million arsenal to the cops – 14 times as much weapons of terror and death than President Bush gifted to the local police at his high point year of 2008.

The Obama administration marks a new stage in the street war against Black and brown people – a war he escalated before the emergence of a new Black movement, rather than in response to it. Activists should dismiss, out of hand, the Obama administration’s propaganda about “community policing,” a catch-all for finessing an ever deeper police presence in Black communities. When Obama was earmarking $163 million for U.S. Justice Department “community policing” projects in 2015, he was simultaneously budgeting more than half a billion dollars for militarization of the police. Conclusion: Obama is willing to invest limited funds in cultivating more snitches, but he’s really gung-ho about outfitting the cops with tanks, machine guns and grenade launchers.”

Killed by Police on Facebook is reporting that 800 amerikan citizens have been killed by police since Jan. 1, 2017, according to corporate news reports.

So yeah, this from Beauregard Sessions and Old Yeller Hair is shite, but so was militarized police under the Comprador-in-Chief Obomba.  The war on black, brown, Muslim, citizens of the underclass and of course, dissidents of all stripes, may just double, treble, who knows, as will incarceration rates into for-profit prisons run by GEO Group and their ilk.  At least this administration lays it out for us; no pretenses.

The Trump Administration is standing up against lawless sanctuary cities. pic.twitter.com/nHg7ZJiCB7