(and I say that in the most polite way possible, of course, mister burrrns.)

In his Sept. 1, 2017 ‘Ken Burns & Lynn Novick Do Vietnam: a Tale of Two Critics’, Michael Uhl at Counterpunch opens:

“…I’ve read two previews that likely define the opposing poles around which critical commentary will grade the film series: “Why the Vietnam War is Ken Burns and Lynn Novick’s Most Ambitious Project Yet,” by David Kamp, in the August 2017 issue of Vanity Fair, and “America’s Amnesia,” by Thomas A. Bass, in Vol. 2, No. 4 (August-October 2017) of the Mekong Review.”

Now the Bass essay at Mekong Review is behind a paywall, but after poking around a bit, I’d found what I assume is the entire review at Vietnam Full Disclosure, Veterans for Peace, bless their hearts for freeing it.  More outtakes from Uhl:

“As I read the tea leaves, the revived debate on Vietnam prompted by the documentary will essentially bypass the old nest of apologists among the surviving neo-cons and the highbrow sages of the National Review and Commentary, and pit forces from the neo-liberal camp who see the “lessons of Vietnam” as repudiations of the U.S. policy of permanent war targeting international “bad guys” not down for American global hegemony, against the principled crowd of leftists and academics who cut their political teeth during the period of massive opposition to the Vietnam War.”

Given what he’s served up in Vanity Fair, I place David Kamp, if only in the utter Arendtian thoughtless he brings to the topic, among the temporizers. Kamp’s operative critical pose is ennui chic. He is bored by treatments of the Vietnam War he’s encountered that recycle the “tired tropes… of Hollywood,” and is refreshed in finding that auteurs Burns and Novick have “avoided” them.   After all, Lynn Novick instructs the critic in an interview, ““There is no agreement among scholars, or Americans or Vietnamese, about what happened: the facts, let alone whose fault, let alone what we’re supposed to make of it.” Burns punctuates his partner’s hymn to ambiguity, telling Kamp he disdained to give voice in their epic to “avuncular, Monday –morning quarterbacking from historians and scholars who never set foot in Vietnam.” There it is: throw out your Gibbon, unless the renowned author of The History of the Decline and Fall of the Roman Empire managed to time travel in the Way-Back machine with Sherman and Mr. Peabody to personally interview the Visigoths as they sacked the Eternal City.”

Uhl then posits that, given the above, who won’t be featured in their 10-part, 18-hor documentary: Noam Chomsky, Christian Appy, Uhl’s friend and author John Marciano.

“During an early stop last April at the University of Texas LBJ School of Public Affairs to promote the film, America’s favorite documentarian was asked if Vietnam was a ‘’just war?” “It’s impossible to make a blanket judgment about the war,” intones Mr. Burns – the very paragon of avuncularity.

“Alas Kamp immediately squanders this minor triumph (mentioned earlier) with a banal observation about the war’s outcome also being “fixed” from the beginning. And how in watching the old newsreels assembled by Burns and Novick, he “winces… every time John F. Kennedy, Lyndon Johnson, or… Robert McNamara ignores or rejects a plausible exit strategy.”   Kamp’s tender moment notwithstanding, one wonders if Vietnamese survivors who have an opportunity to view this “monumental achievement” – as most assuredly they will – also wince when witnessing these unpunished acts of criminality by American leaders who worked so assiduously to bomb them into submission.”

“But there is something especially cynical in the way Burns and Novick use Harris (Roger Harris, a black man from the hood in Boston’ mentioned above) as a strawman to promote the greatly exaggerated trope – to coin a phrase – about Vietnam veterans subjected to abuse, in particular in being slandered as “baby killers.” Maybe someone did call Harris a baby killer, but in the clip I saw, he appears to be generalizing – “they called us…” – not speaking from personal experience.   To juxtapose my own homecoming experience, and that of the scores of Vietnam veterans I have gotten to know over the past fifty years, not one of them ever complained of being confronted with those hurtful words, not to mention being spat upon.

That narrative of the badly treated Vietnam vet, never properly welcomed home, another trope and one exploited by Ronald Reagan in his first presidential campaign, has lubricated the smooth transition into the American collective unconscious of the ordinary boy next door, the citizen soldier who went to war, reluctantly or willingly, into the inflated, glorified warrior we are expected to revere today, and which David Kamp abets shamelessly and without reflection. Not a reader of Vanity Fair, I had none the less formed the vague notion that the magazine was a showcase for good writing, the only possible motivation for slogging through its telephone-book-thickness of glossy ads for power wrist watches and the fashion menu from the Milan rag trade.   Gratefully, David Kamp has disabused me of that hollow misimpression.”

“In the hands of Thomas Bass, a thoughtful, informed scholar, The Vietnam War is cast in an infinitely more revealing light.  Bass’s exceptionally insightful essay, America’s Amnesia, appears in the lively Mekong Review, edited by a Vietnamese expatriate, Minh Bui Jones, until recently based in Phnom Penh, and now relocated to Sydney, Australia where Minh’s refugee family settled in 1978.   Leading with a solid blow, Bass nails the essential flaw in the “cinematic topoi” – the conventional syntax – of the Burns’ brand, “the urge toward healing and reconciliation, rather than truth.”

“By Episode Two, “we are heading deep into Burns territory. The war has been framed as a civil war, with the United States defending a freely elected democratic government in the south against Communists invading from the north. American boys are fighting a godless enemy that Burns shows as a red tide creeping across maps of Southeast Asia and the rest of the world.”   But here’s the rub. “The historical footage in Episode One which disputes this view of the war, is either ignored or misunderstood. Southern Vietnam was never an independent country.”

From there Bass retells the story well known to any serious student of this history. After the French defeat, the South Vietnamese state was engineered by the U.S. through the manipulations of a super spy named Edward Lansdale, bankrolling an internal struggle to overthrow Saigon’s powerful drugs lords who had helped to finance France’s colonial empire, and, with the collaboration of Vietnamese elements who had served the ancien regime, installed the Catholic mandarin, Ngo Dinh Diem, who, until his return to Vietnam, was being groomed by the CIA in the United States.

Diem then cancelled the elections “intended to unify northern and southern Vietnam – that President Eisenhower and everyone else knew would have been won by Ho Chi Minh.” Another election was quickly staged in the south, with Diem claiming to win 98.2% of the vote.   Breaking their link to the opium trade was “the CIA’s announcement that the French were finished in Southeast Asia…” – the Company now taking charge of that product line – “and it was time for the losers to go home.” After which came the American War beginning with the ill-fated Diem, ultimately abandoned by his sponsors and assassinated, and the building of “the autocratic police state that survived for twenty years before collapsing into the dust of the last helicopter lifting off from the U.S. Embassy” [which, Bass informs us, was actually a CIA safe house]. Lansdale’s critical contribution to this sequence of events, is absent from Burns’ film (although it is covered in the coffee table book that will accompanying the series).”

[wd here: at the bottom of David Kamp’s Vanity…drivel is this horror: CORRECTION: A previous version of this story misidentified the building in Saigon from which evacuees boarded a helicopter. It was from the roof of a local apartment building.]  WTF?  CIA get him on the phone?

“Despite the overwhelming evidence, including the statement by Leslie Gelb, the senior Defense Department official [and later correspondent for The New York Times] who directed the project that produced the Pentagon Papers, that “South Vietnam… was essentially the creation of the United States,” Burns and Novick remain heavily invested in the narrative of the two Vietnams. Selected for the role to advance this historical distortion in their film is a Vietnamese woman named Duong Van Mai Elliott, who has also been a prominent member of the promotional tour Burns and Novick have been conducting throughout the country in advance of the film’s official airing. Elliott is a former interrogator of the Rand Corporation, married to an American for fifty three years, and a longtime resident of the U.S.” 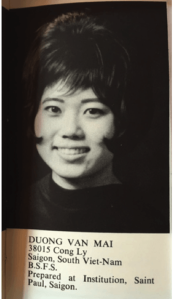 ““Once Lansdale is erased from the history of the Vietnam War,” observes Bass with some disgust, “we settle into watching eighteen hours of carnage, interspersed with talking-head testimonials… More than eighty people were interviewed over the ten years they gathered material… Funded by Bank of America and David Koch and other corporate sponsors… the film relies heavily on former generals, CIA agents and government officials, who are not identified by rank or title, but merely by their names…” As the credits roll, we will learn that here we find that the war’s architects have had their say in the film, even if they are not likely to get much attention after the series is shown. As I said above, we all know that no one today, supports the Vietnam War. It is only in exploring whether the war was a mistake or a crime that the debate will revolve.”

Again, Uhl’s entire essay is here;  he recommends passing Thomas Bass’s  thoughtful, truthful, and realistic take widely among your networks.  Oh, and adding insult to injury, the film is narrated by none other than overly-ubiquitous…Peter Coyote; guess hiring him to narrate documentaries has become the gold standard, and is now essentially  de rigueur.  Good Gawd all-Friday.

Before closing, I’d like you to be able to listen to ‘It was just finishing school’ from Karl Marlantes very well-decorated former US Marine, and add one more quote from Bass:

“And instead of its search for closure, and healing reconciliation, what if the film had reminded us that US special forces are currently operating in 194 countries, or 70% of the world?”

This entry was posted in empire and war crimes, psyops and propaganda. Bookmark the permalink.