Israel doesn’t have a land in Palestine to have a capital 😡#HandsOffJerusalem #Jerusalem_is_the_capital_of_Palestine ❤ ✌️ pic.twitter.com/9Yu8vDdgXL

(I’d love it if readers would help me understand what I don’t get right, but…the more I read, the more I realize how little I know.)

Now as to who loves his fealty to Bibi and Zionism?  AIPAC (American Israel Public Affairs Committee, The Saudis, all of those those who wish to gin up war against Iran (and those who cheer Herr T’s having ‘decertified’ the Irn nuke deal), and of course the US Senate, the IDF (and the US po-po they train) and Israeli Security Services, NATO, Christians United for Israel (CUFI) and other Evangelicals who believe ‘when Israel stands alone, Christ will return…’

Today @realDonaldTrump made the courageous announcement that the United States will move its Embassy from Tel Aviv to the Holy City of Jerusalem. Let’s unite together on this historic day to pray for our President, our nation and the nation of Israel like never before. pic.twitter.com/xxby2Iaobw

…and of course the US Ambassador to the UN: Nikki Haley Retweeted

“From this day onward, for the next 70 years and beyond, Israel will continue to be a beacon of democracy, a powerhouse of innovation and a light unto the nations”

‘Trump and Jerusalem: The end of the Mideast “peace” charade’, wsws.org, 8 December 2017

“In his speech Wednesday, Trump overturned seven decades of a US policy founded on hypocrisy. While the State Department has formally held that the status of Jerusalem can only be determined based on a negotiated settlement between the Israelis and Palestinians, successive US presidential candidates, Democrats and Republicans alike, have vowed to move the embassy, only to back off from the promise once in office. Similarly, the US Congress voted in near unanimity for the move, while providing the president with a national security waiver to postpone the relocation.

Bernie Sanders along with 90 other Senators unanimously voted to move the U.S. embassy to Jerusalem in June #Zionism https://t.co/RZxoOkffNc pic.twitter.com/nHCHip2Hky

“The explosive character of disputes concerning jurisdiction over Jerusalem, which is home to what are considered among the most holy sites of Islam, Christianity and Judaism, has been recognized by international diplomacy since well before the founding of the state of Israel.

In one stroke, Trump upended the posturing of past administrations. In doing so, he sent a clear signal to the right-wing government of Prime Minister Benjamin Netanyahu that its expansion of Zionist settlements, expropriation of Palestinian land, ethnic cleansing and wholesale repression will enjoy unconditional support from Washington.

To the Palestinian Authority, he offered nothing outside of a demand that it continue its role as a security guard for Israel and the West, calling upon it to join in an American crusade “to defeat radicalism” and ensure that the Palestinian people “respond to disagreement with reasoned debate, not violence.”

Actually, a few other parts of Senate Resolution 176 (SR 176) read: “Jerusalem should remain the undivided capital of Israel in which the rights of every ethnic and religious group are protected,” Senate Resolution 176 (SR 176) states. It adds that “there has been a continuous Jewish presence in Jerusalem for 3 millennia,” and notes that “Jerusalem is a holy city and the home for people of the Jewish, Muslim and Christian faiths.”

The resolution was timed to coincide with the 50th anniversary of Jerusalem Unification Day which was celebrated on Tuesday, May 23, this year. The event followed the Six Day War of 1967 in which Israel fought against and defeated the neighboring states of Egypt, Jordan, and Syria.”

“Whereas, from 1948 to 1967, Jerusalem was a divided city, and Israeli citizens of all faiths as well as Jews of all nationalities were denied access to holy sites in eastern Jerusalem, including the Old City, in which the Western Wall is located;

Whereas, in 1967, Jerusalem was reunited by Israel during the conflict known as the Six Day War; Whereas, since 1967, Jerusalem has been a united city, and persons of all religious faiths have access to holy sites within the city;

‘Palestinians Resist Israel and its US Enabler’;  As the Israeli crackdown on protests in the Occupied Territories turns deadly, human rights attorney Noura Erakat says that Trump’s decision on Jerusalem is only the latest US attack on Palestinian self-determination, TRNN, Dec.9, including:

“AARON MATÉ: Noura, I want to talk a bit about how we got here and the key role of Democrats in laying the groundwork for Trump. After all, just recently it came out that Chuck Schumer, the head of the Democratic Party in the Senate had urged Trump to declare Jerusalem as the unified capital of Israel. On this front, I want to go to two clips. They’re both, they’re of President Obama speaking at A(I)PAC in 2008 and four years later Chuck Schumer in 2012.

BARACK OBAMA: Any agreement with the Palestinian people must preserve Israel’s identity as a Jewish state with secure recognized defensible borders. Jerusalem will remain the capital of Israel and it must remain undivided.

CHUCK SCHUMER: Everyone knows the vast overwhelming majority of Democrats, Democrats have always been for Jerusalem being the unified capital of Israel. I’m one of the leading Democrats on Middle East policy. That’s been my position for a long time. This is a tempest in a teapot. The overwhelming Democratic position is just that.”

NOURA ERAKAT: I think what should be pointed out for our audience, we are in a moment that has been defined by resistance to Trump as if what Trump is doing is unprecedented. In some cases, it might be more bold. It might be more bombastic, irresponsible, lacking and arrogant. But it isn’t necessarily a rupture especially on this issue. The declaration of Jerusalem as Israel’s capital is the consecration of five decades of US foreign policy on this issue. This is actually the pinnacle of an inevitable outcome of what the United States has been doing to shield Israel from any kind of international accountability.”  [snip]

That said, Palestinian leadership is also speaking out of both sides of its mouth. On the one hand, it’s hedging its bets and still has faith in the United States. On the other hand, it keeps using these veiled threats and these small incremental steps that are moving away from the United States but never fully resisting it, never fully pivoting away from it. It’s maintaining Palestinians in this holding position.

Now I assume that Erakat is referencing Mahmoud Abbas of the Palestinian Authority, who has been called a puppet of Bibi and the US, as has wsws,  but feel free to help me out on that. Could she mean Hammas the Wiki describes as Palestinian Sunni-Islamic fundamentalist organization in the Gaza Strip?  Anyhoo, the transcript is at the link above.

“After Netanyahu’s summit meeting with EU foreign ministers, however, EU High Representative for Foreign Affairs Federica Mogherini said the EU would not support the proposal or move its embassies from Tel Aviv to Jerusalem. “The prime minister mentioned a few times he expected other countries to follow president Trump’s decision… He can keep his expectations for others, but from the European Union member states’ side, this move will not come,” Mogherini said.

Mogherini reiterated the EU’s support for the common existence of Israeli and Palestinian national states, based on the borders prior to the 1967 war. She called this the “international consensus” and added that the EU would continue to support it until the status of Jerusalem was resolved by international negotiations.” [snip]  (this map Mondoweiss.net deems ‘mostly correct‘.) 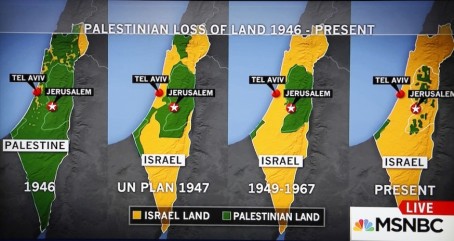 “Increasingly, the regional powers are preparing for a new, even bloodier war. A major target of the US-Israeli escalation, as of Saudi Arabia’s detention of (Lebanese Prime Minister Saad) Hariri, is the Iranian-aligned Hezbollah militia in Lebanon. In 2006, Hezbollah fought an Israeli invasion force attacking Lebanon to a draw, and concerns are growing in Israeli media that Hezbollah has been strengthened militarily by its participation in the war against the US-backed intervention in Syria.”

Thread on Resistance Axis & Jerusalem: According to high ranking Hizbullah sources, shortly after Nasrallah threatened Israel with 10s of 000s of fighters from Resistance Axis countries, Hizbullah's offices were inundated with delegations of reservists volunteering their services

4) ”This isn’t only due to sanctity of Jerusalem, but perhaps more so to the security doctrine that is shared by members of the Resistance Axis, which see Israel as a strategic threat to Iran, Hizbullah & Syria, no less than the takfiris. Palestine is backbone of resistance project”

ah, hell, let’s have the Twittesphere take it; too many links to consider.

#Nasrallah today: I call on all the resistance factions in the region to unite and put together a unified, clear & specific strategy for a confrontation that will keep the Palestine cause alive & win us back #Jerusalem pic.twitter.com/NUqZnNjXFM

Tens of thousand in the streets in south Beirut after Hezballah called for mass demo today to protest #Trump’s #Jerusalem deceleration, hezballah Chief , Hasan #Nasrallah to speak shortly during the demo. #Lebanon pic.twitter.com/y7ff9D48VK

How many Israeli soldiers does it take to arrest a Palestinian child? Here is Fawzi Mohammad Aljuniedi, 16 years old. Photo from yesterday’s protests across Palestine. Now is the time to redouble our BDS efforts, to demand a military embargo against Israel. pic.twitter.com/CHUtRoRekD

American UN Ambassador Nikki Haley says that recognition of Jerusalem is about 'not picking sides'. Of course the US picked a side. It picked the illegal side. https://t.co/5thT6hPiX8

(tonight is the First night of Hannukah/Chanukah)

Yah, when the chirren were still here, we were very ecumenical, and  lit the menorrah and kwanzaa candles as well, but our City Market/Slaveway candles now don’t even have the prayers on the boxes.  I think we’ll light the first candle in the menorrah,  place it in the window tonight, come to think of it; it can’t hurt, can it? But how brave was this. bless their hearts for all eternity?

Like Loading...
This entry was posted in empire and war crimes, resistance under oppression. Bookmark the permalink.