subtitled: They have apps for that!

‘Our Climate is Changing Rapidly; It’s Time to Talk about Geoengineering’, futurism.com, Jan. 12, 2018.  The author discusses several high-tech methods afoot, deconstructs most of them as to the dangers of unintended consequences, costs, and what the actual bio-chemical science of some of the ‘solutions’ would wreak. To save quoting extensively, I’ll borrow their graphics, then bring a few lines from a 2017 piece at the Guardian as explanations.
“Indeed, utterances from people in or close to the Trump administration – most notably GE proponent secretary of state Rex Tillerson, who has referred to climate change as “just an engineering problem” – make it clear they either tacitly or directly support the idea of climate engineering.

Earlier this year, Keith, a professor of applied physics at Harvard announced plans to conduct an outdoor trial into stratospheric aerosol injection, involving launching a high-altitude balloon that will spray a small quantity of reflective particles into the stratosphere. Keith believes the experiment may help to measure the feasibility and risks involved in GE, an umbrella term for a range of techniques to deliberately adjust the climate in an effort to mitigate global warming. 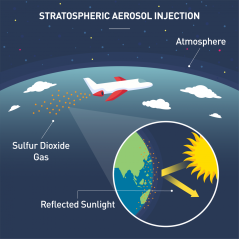 They include reflecting sunlight from space, adding huge quantities of lime or iron to the oceans, pumping deep cold nutrient-rich waters to the surface of oceans and irrigating vast swaths of desert to grow trees. 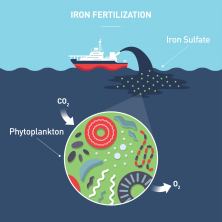 “Supporters of research into geoengineering argue that its techniques – roughly-speaking divided into carbon dioxide removal (CDR, or negative emission technologies) which removes greenhouse gases, and solar-radiation management (SRM or solar geoengineering) which reduces the amount of solar energy warming the planet – could help to lessen some of the consequences of climate change. However, the common consensus is that the techniques should be used in addition to reductions in CO2 emissions.

This week’s conference drew attention to the huge risks involved.

“All the techniques being proposed have potentially severe environmental impacts,” said Silvia Ribeiro of the ETC Group, leading campaign monitors of new technologies and their possible impact on the world’s poorest.

“They also ignore the question as to why there’s not enough political will to have done more to tackle climate change until now and they in turn serve to justify the inaction,” she added.”

You may remember that I’d featured ETC group’s warnings on CRISPR gene-drive technology in an earlier diary. More on negative carbon emission projects like BECCS in a bit.  But let’s head to the ETC group now and read:

‘US Attempting to Move Forward with Geoengineering; Open-air experiments defy global moratorium, could help lock in ‘big bad fix’ for climate’, etcgroup.org May 4, 2018

“Although 196 countries have agreed to a moratorium on geoengineering activities through the UN Convention on Biological Diversity, a defiant United States is hosting three attempts to hack the skies and manipulate oceans to cool the planet. ETC Group and GeoengineeringMonitor.org (a collaboration with Heinrich Boell Foundation and Biofuelwatch) have published briefings on each project:

“The push to establish ‘facts in the air’ and normalize geoengineering experiments are coming from a small clique backed by a smaller number of billionaires,” said Silvia Ribeiro, ETC Group’s  Latin America Director. “It’s hard to find another case where so few people put themselves in a position to have such a potentially massive geophysical impact on humanity and the planet.”

While oil companies have long been enthusiastic about geoengineering because it represents a “fix” for climate change that allows them to continue polluting the planet, most geoengineers have avoided direct association with the fossil fuel industry, accepting funding from Bill Gates and other billionaires instead.

“Trump pulled out of the Paris Agreement, and now a few billionaires are trying to make a pathway for oil companies to keep extracting,” said Neth Daño, Co-Executive Director of ETC Group. “Geoengineering has to be stopped so that resources can flow into what everyone knows is necessary and urgent: changing our production and consumption patterns and transitioning away from fossil fuels.”

“To help navigate fact and fiction on geoengineering, today Geoengineering Monitor, a civil society information hub run by ETC Group, Heinrich Böll Foundation and Biofuelwatch, has released fourteen fact sheets that give up-to-date information on the status, key players, and potential impacts of some of most prominent geoengineering technologies:

Now the above link to ‘Bioenergy w/ carbon capture is BECCS, a few quotes:

“A large body of peer-reviewed literature indicates that many bioenergy processes result in even more CO2 emissions than burning the fossil fuels they are meant to replace – it is certainly not carbon neutral.10 This is due to emissions from (but not limited to): converting land into energy crop production which sometimes results in the displacement of food production, biodiverse ecosystems such as forests, or other land uses (indirect land use change); the degradation and overharvesting of forests; and emissions from soil disturbance, harvesting and transport.

Because BECCS needs fast-growing energy crops, its deployment could also require more than doubling fertilizer inputs, requiring as much as 75% of global annual nitrogen production. This would seriously exacerbate environmental degradation and emissions associated with fertilizers and agrochemicals, which currently cause large-scale anoxia in oceans and eutrophication of streams and rivers, for example.11

A study looking at what would be required to sequester 1 gigaton of carbon annually using BECCS, equivalent to around a fiftieth of global annual emissions, concluded that between 218 and 990 million hectares of land would be needed to grow the biomass (this is 14-65 times as much land as the US uses to grow corn for ethanol).14 More recent studies calculate that the biomass required for BECCS would take up between 25 and 80% of current global cropland.15

Land conversion on such a scale would result in severe competition with food production, depletion of freshwater resources, vastly increased demand for fertilizer and agrochemicals, and loss of biodiversity, among other problems.16 Indeed, one study concluded that large-scale deployment of BECCS could result in a greater loss of terrestrial species than temperature increases of 2.8°C.17 “

While various biomass fuels, either grown to burn, or by burning plant ‘waste’ such as cornstocks after harvesting the corn are posited, such as this mega lulz one:

‘Stanford researchers find carbon capture a financial opportunity for U.S. biofuels, with recent tax credits and other policies, removing carbon dioxide from the atmosphere and storing it underground is not only possible but profitable for U.S. biofuel refineries’, stanford.edu, April 23, 2018

James Dyke at theconversation.com, August 8, 2017 in his ‘Climate change is running a $535 trillion debt’ parses his title for us.

“These are the main findings of new research published in Earth System Dynamics, conducted by an international team led by US climate scientist James Hansen, previously the director of NASA’s Goddard Institute for Space Studies.”

Putting carbon back in the ground

“The most promising negative emissions technology is BECCS – bioenergy with carbon capture and sequestration. It involves growing crops which are then burnt in power stations to generate electricity. The carbon dioxide produced is captured from the power station chimneys, compressed, and piped deep down into the Earth’s crust where it will be stored for many thousands of years. This scheme would allow us to both generate electricity and reduce the amount of CO₂ in the Earth’s atmosphere.

The Hansen team estimate how much it will cost to extract excess CO₂ with BECCS. They conclude that it would be possible to move back to 350ppm mainly with reforestation and improving soils, leaving around 50 billion tonnes of CO₂ to be mopped up with negative emissions technologies (the plants grown for BECCS take in the CO₂, which is then sequestered when burned).

But that’s only if we make significant reductions in rates of emissions right now. If we delay, then future generations would need to extract over ten times more CO₂ beyond the end of this century.

They estimate costs between US$150-350 for each tonne of carbon removed via negative emissions technologies. If global emissions are reduced by 6% each year – a very challenging but not impossible scenario – then bringing CO₂ concentrations back to 350ppm would cost US$8-18.5 trillion, spread over 80 years at US$100-230 billion a year.

If emissions remain flat or increase at 2% a year, then total cost balloons to at least US $89 trillion and potentially as much as US$535 trillion. That’s US$1.1 to US$6.7 trillion every year for eight decades.”

Myself, I find this dubious at best, craptastic at worst. : ‘They conclude that it would be possible to move back to 350ppm mainly with reforestation and improving soils’, especially as Hansen advocated for more nuclear power and carbon taxing.

“Shell has been involved in the International Biochar Initiative and their chief Lobbyist, David Hone, is evangelical about “negative emissions.”2 Expanding biochar research has since been funded by ExxonMobil, Chevron and Encana. Corporate support has mainly come from the Canadian tar sands industry. Cenovus is planning a tar sands “waste-to-biochar” reclamation project, co-owned by Conoco Philipps,3 who have been promoting biochar among a wider range of ‘carbon sequestration’ geoengineering approaches as one way of ‘greening’ the image of one of the world’s most destructive industries.

Biochar is also being promoted by geoengineering proponents such as the Gates Foundation and Richard Branson’s Carbon War Room. Small biochar projects in the Global South continue to multiply. Few of them are accompanied by scientific studies and many appear to serve mainly to try and attract greater investment for biochar.”

It all seems a worse and destructive con as one reads, including this key reality check:

“Biochar proponents also insist that they won’t cut forests or convert ecosystems to provide burnable biomass. Just like the biomass electricity industry, they prefer to talk about burning “wastes and residues.” But there is no such thing as “waste” in a forest ecosystem – everything is recycled, via decay, to support regeneration and regrowth. In many places, definitions of waste have been expanded to include virtually any wood that is not valued as saw logs, so timber harvests are more intense and destructive. In agriculture, there are often better options for residues, such as compost, mulch, animal fodder, and bedding. Industrial forestry and agriculture practices have already wreaked havoc on ecosystems; creating a market for the waste products of unsustainable practices is not a step in the right direction.”

I’d been trying to find a simple way to expose the hell of REDD program (Reducing emissions from deforestation and forest degradation) as part of cap-and-trade policy for what and who it effects most.  At the link concerning Gov. no-longer-Moonbeam in CA it’s called racist, no bones about it.  But it suddenly occurred to me that biochar would be an intergral part of it, and whooosh, was I on the money, so to speak.  Just in case you need more to read…j/k:

Part III will feature water, and I guaran-damntee you’ll hate reading it.  As in ‘Abandon all hope ye who enter here’?  likely.

Like Loading...
This entry was posted in climate change, compromised NGOs and non-profit industrial complex. Bookmark the permalink.