From the Guardian, Aug. 6, Luke Harding and a couple other folks: UK poised to ask Russia to extradite Salisbury attack suspects, Exclusive: Kremlin certain to reject request that will reignite simmering diplomatic row’

“The British government is poised to submit an extradition request to Moscow for two Russians suspected of carrying out the Salisbury nerve agent attack that left one person dead and four injured, according to Whitehall and security sources.

The move comes after months of painstaking investigation by hundreds of officers from the police and the intelligence agencies. They have pieced together the movements of the two Russians, from their entry into the UK through to their departure.

The Crown Prosecution Service, which prepared the extradition request, has completed the process and is ready to file, the sources said.” [snip]

“UK intelligence chiefs have specifically blamed Russia for the attack.

“Police and intelligence officers believe the novichok used to attack the Skripals on 4 March was applied from a perfume bottle sprayed or smeared on to their front doorknob. Both of them recovered. 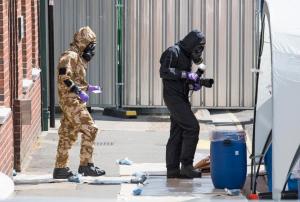 Police are working on the assumption that the bottle was dropped somewhere in the city, where it was later picked up by Rowley, who gave it to Sturgess. The pair were taken to hospital on 30 June.”

Was it a doorknob liquid later morphed into gel…was it a spray perfume?  Is it a bird a plane: no!  It’s Novickok! Or was it…as the Swiss Spiez Lab stated: the possibly hallucinogenic, incapacitating BZ toxin (3-Quinuclidinyl benzilate), not produced in Russia, but was in service in the US and UK, as well as other NATO member states?

“A security source said the attack on the Skripals was ordered by the GRU, Russia’s military intelligence service, rather than the FSB, which is roughly equivalent to MI5. Skripal, a former GRU colonel, was turned by the UK overseas intelligence agency, MI6. The GRU has a history of conducting crude revenge attacks on those who have betrayed it.”

Well, at least they indict the GRU, not just ‘Putin’ now.  But why would the GRU care about released-after-serving-his-sentence double-agent spy Skripal matter now?

Shhhhhhhh….keep this on the down-low, okay?  It’s a whisper campaign delivered to us by the self-same Luke Harding and homies:

“The former Russian spy Sergei Skripal gave briefings to European intelligence services in the years before the attempt on his life, which may offer a motive for why Moscow allegedly targeted him with a deadly nerve agent.” [snip]

“Although his operational knowledge ended with his arrest in Russia in 2004, Skripal was still regarded as being of value because of his inside knowledge of the workings of Russian military intelligence.

According to the Czech magazine Respekt, Skripal visited Prague in 2012 and held discussions with Czech intelligence. He briefed security officers on Kremlin espionage methods, and the meeting was described as “beneficial”. Members of Czech intelligence subsequently met Skripal in the UK at least once, the magazine reported.” [snip]

“He gave sensitive briefings to European intelligence agencies after he moved to Britain. It seems that MI6 approved of and facilitated these trips. In June 2016 Skripal travelled to Estonia and met a select group of intelligence officers there, the New York Times reported on Monday. It said it was unclear what they discussed.”

“Security sources in the Czech Republic said Skripal’s meetings with Czech intelligence agents would probably have been useful, but they dismissed them as a likely motive for the poisoning attack.”

Sounds like iron-clad innuendo from the Guardian and New Yawk Times again to me.  But this is cool as all giddy-up”

“The Czech Republic has expressed repeated reservations about the large number of Russian diplomats – estimated at around 100 – stationed in the country amid suspicions that many of them are undercover spies.”

They should chuck the bastards out and shutter the embassy like the West does, right?

…Which is noteworthy mainly for the repeat focus on the GRU (not to be confused with the KSB), and that it’s not by Luke Harding, although there are some funny lines in it.  I particularly liked the caption under the photo below:

‘The Tower’, a GRU building in Khimki, Moscow, named by Robert Mueller as the base of one of the GRU units that interfered in the 2016 US election. Photograph: Alexander Zemlianichenko/AP’

But given the ever-evolving Novichok News, this one really is the icing on the Grand Novichok™  Cake (warning: set down your coffee cup before you read further):

‘Public toilet in Salisbury ‘may have been used by Russian agents to prepare deadly Novichok’, themirror.co..uk.com, Aug. 4, 2018

“A public toilet may be where Russian agents mixed deadly Novichok used to try and assassinate ex-spy Sergei Skripal , according to reports.

It is thought Met Police counter terror cops are investigating the likelihood that the assassins smuggled the components to the nerve agent into the country then mixed it in a public toilet in Salisbury.

A source told The Sun : “Novichok is a liquid agent made of two components.

“The toilets in Queen Elizabeth Gardens are a key location where it could have been mixed, prepared or dumped.”

Me, I just hope they washed their hands after using the loo, don’t you? 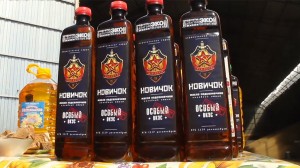 This entry was posted in psyops and propaganda and tagged Novichok™. Bookmark the permalink.