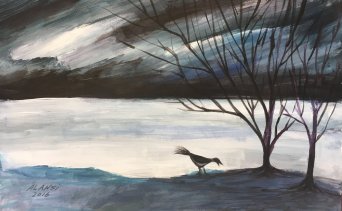 ‘Depression can be a compensatory response to the inherently manic nature of capitalist dominance of every aspect of life in late modernity.

The affliction knocks you on your ass and keeps you there until the psyche can find a better means of using the agency of libido, which, under the extant corporate/consumer/surveillance state panopticon, has been usurped. Under the system’s economic despotism and attendant anomie and alienation, one’s longings, more often than not, do not lead to the connecting eros of a life-enhancing vocation or deepening interpersonal encounters but only as a vehicle that hijacks one’s life into the service of a soul-crushing system, wholly designed to exploit every moment of this fleeting life for the benefit of an overclass of parasites, a klavern of vampires and ghouls.

Depression is the soul’s way of saying, to paraphrase the Vietnam-era antiwar chant, “Hell no, I won’t go.”

Alienation is an apt response to negotiating a soulless landscape. Where is the eros in Big Box/stripmall encounters? The ad hoc architecture of consumer culture, which manages to be both utilitarian and garish, renders the heart dry as dust and grinds the

mind to spittle. The psyche is in constant communion with its outer surroundings. Thus, what comes to pass if what is extant is a nadascape of vapid commercialisation, designed to deliver the shallow sensations concomitant to consumerism but lacking a connecting eros to both numinous inner realities and binding human encounters? A mortification occurs. Some individuals are driven to lash out in anger, even in acts of mass murder. The rage remains inchoate, and thus is displayed in acts of road rage, in domestic abuse, in online trolling, in nebulous hatred of outsiders and minorities and the foreign other.

The propagandists of empire are privy to the fact. Hence, so many are convinced, so easily, that North Korea and Iran are threats to the homeland; that Russiagate is a thing; that the US military and the nation’s so-called intelligence agencies are a force for good and act as agents of protection against a hostile world.

But with some, their soul isn’t buying it. Depression pulls one deep into oneself; therefore, manic compensation and displacement is not possible.

They have opted out of the collective madness.

Depression’s descent into the self becomes the option to surface level tropes of distraction. Compulsions fall away like Autumn leaves, the sap of life is seemingly frozen, the winds of the world howl through the barren branches of one’s inner wilderness — to wit, an accurate apprehension of the sound of propaganda and its affront to mind and soul.’

not all depression is a socio-political response, of course.  mine is also a likely transitory personal response to a seemingly intractable end of communications with our daughter, as well as too many mind-numbing communications from our soon-to-former daughter-in-law.

but this and a coordinated effort to foment lies against julian assange, get him kicked out, or kidnapped from,  the ecuadorian and shipped to either DeeCee or Gitmo, as well:

After 8 months, @smaurizi @repubblica were finally granted permission to visit the @wikileaks founder in the @EmbajadaEcuUK. I was shocked to realise his heavy isolation and inhuman conditions (English) https://t.co/OLaE0L82eI

20 responses to “thoughts on depression”