May 15, 2019 was the 71st commemoration of Nabka (‘the Catastrophe’ as per Palestinians), when in 1948 hundreds of thousands, some say a quarter of a million,  Palestinians either fled or were forcibly removed from their traditional homelands.  Given that timing, many journalists have been covering the March of Return protests in Gaza, ‘anti-Eurovision’ events, as well as describing the ongoing horrors of life in Gaza and the West Bank. 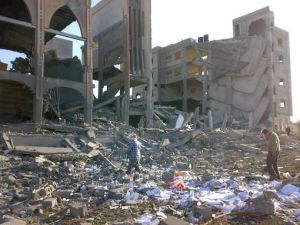 “The Islamic Resistance Movement began more than thirty years ago at an historical moment in time which it knew to be fraught with absolute peril for their people. The founders of this national liberation struggle examined the overwhelming military capabilities of Israel, fostered by its global superpower sponsor, the United States. They looked at Israel’s expansionist programs–the Zionist project of illegal settlements erasing their homes and villages, dispossessing mothers and fathers, sisters and brothers–and at the failure of the international community to stop them.  They knew then that within a generation Palestinians would lose it all –their motherland and patrimony and their nation–leaving them homeless captives to the whims of another man’s door.  In that moment, resistance was not a lifestyle choice or a revolutionary pose. It was existential necessity, just as it is now.

Everything Hamas predicted then has come to pass. Here, a generation later, it should take no comfort reminding the world that they were right in their analysis. Israel has grown only stronger and more rapacious, more intransigent and murderous in its deeds.  Its “democracy” did not save it from becoming a racist, apartheid state presiding over a military occupation of millions of Palestinians. Israel’s policy of creating “facts on the ground”– that is, the illegal settlement project – has transitioned from a de facto expulsion and annexation policy into a de jure one, as its prime minister calls for the removal of Palestinians and the annexation of the West Bank, and the American president and congress pre-emptively applaud the crime-to-be. The Golan Heights–sovereign territory of another nation– is now Israel’s by force, cynically annexed, while Syria struggles in the throes of war.  And Jerusalem (al Quds) is ringed by new, fortified suburbs and restricted highways demolishing Palestinian neighborhoods and cutting off their city from them. America now calls Jerusalem Israel’s capital–in direct violation of international law. Since 1967 [the 6-day war], successive U.S. administrations have told Palestinians to trust in their good faith as brokers of a just peace.  This has been a lie, as Hamas anticipated then, America was running cover, a stalling tactic, for the slow-motion destruction of Palestinian national aspirations.  Tragically, tens of thousands of Palestinians have been killed and maimed and many more imprisoned by Israeli state violence since Hamas began. The international community has done little to stop the monstrous crime unfolding.

Palestinians were right to resist then. The world surely can see that now.  The tragedy of retrospection should, at the very least, accord Palestinians their due: resistance is morally right, history has proven it so.”

Cohen then alludes to ‘Zionist real estate lawyer from New York Jason Greenblatt’s op-ed at the NYTimes’, noting that Greenblatt is in charge of shepherding the “peace process” for the Trump administration as the Special Representative for International Negotiations.

I’ve found a detractor of Greenblatt’s insulting ‘blame the victims’ rubbish at the Times:

‘Gaza and Hamas: How Jason Greenblatt aims to turn the victim into executioner, Blaming Palestinians while facilitating Israeli crimes is the hallmark of US policy in the region’, Basem Naim, 7 May 2019, middleeasteye.net

“We were not surprised by the false picture painted in this article, given that US policies unreservedly adopt the extreme Israeli position. Every measure taken by this administration has aimed to promote the occupation and undermine Palestinian rights.

The Trump administration has recognised Jerusalem as Israel’s capital, written off the Palestinian right of return, and recognised Israel’s illegal annexation of the Golan Heights. US President Donald Trump’s team has given clear signs of its implicit consent to Israel’s annexation, in whole or in part, of the occupied West Bank.”

“Every time Israel attacks our people, Greenblatt and his leaders express their absolute support for the occupation. In the latest assault, Israel killed 25 Palestinians in Gaza, including babies and women; wounded dozens; and damaged scores of homes and civilian facilities.

Greenblatt, however, has blamed Hamas for firing rockets, maintaining the US position that Israel is entitled to defend itself. In his Times article, Greenblatt misleads readers, taking advantage of the lack of public knowledge about many facts on the ground.

Greenblatt tries to turn the victim into the executioner, partly by listing the effects of the siege imposed on Gaza for more than a decade, from the lack of medicine and electricity, to widespread unemployment and infrastructural collapse. But he fails to point out the real cause behind this human tragedy.

Greenblatt claims that Hamas, which has controlled Gaza since 2007, is behind all of this. He fails to cite the litany of international reports accusing Israel of war crimes and crimes against humanity in Gaza, where two million Palestinians are imprisoned and deprived of their basic rights. 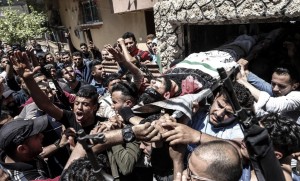 Mourners carry the body of 22-year-old Palestinian Emad Nasser, who was killed during a protest at the Israel-Gaza border fence, during his funeral in Beit Hanun in the northern Gaza Strip on May 4, 2019. (Photo by MAHMUD HAMS / AFP)

“Attempts by the Palestinian Authority to reach an internationally acceptable solution – despite the reservations of many Palestinians about the efficacy of those attempts – have been rebuffed by Israel and the Trump administration, as more settlements have sprung up and the rights of Palestinians have been repeatedly trampled, including through the cessation of US financial support for Palestinians.

Israeli apartheid has been legalised through the nation-state law enacted last year, formalising a system of racism against the country’s Arab citizens.

Hamas is a Palestinian national liberation movement, democratically and transparently elected by a majority of the Palestinian people in the 2006 election, which was supervised internationally. Hamas believes in the right of our people to freedom, independence, self-determination and return.

We do not adopt violence, but it’s our right to resist by all available means guaranteed by international law for all peoples under occupation. But it seems that Greenblatt’s administration no longer believes in international law, working to bypass it and destroy its institutions.

Hamas did not initiate any of the three wars launched by Israel against Gaza in 2008, 2012 and 2014. Israel was the initiator each time. Hamas defended its people with its own limited capabilities, which do not compare to the occupation’s advanced weaponry.

All Palestinian factions, including Hamas, have taken part in the recent peaceful demonstrations near the Gaza fence, demanding the lifting of the siege and implementation of the right of return. In response, Israeli forces have used live ammunition, killing hundreds of Palestinians and wounding thousands. Many are permanently disabled. No Israelis were killed in the demonstrations.”

“Justice requires respect for the rights and aspirations of the Palestinian people for freedom and independence – to let them contribute to well-being and prosperity, not only for themselves, but for peoples throughout the region, and indeed the whole world.”

A closing paragraph from Stanley Cohen:

“Not long ago, Israel sent an assassination-squad surreptitiously into Gaza to kill Palestinian leaders. In the weeks since, it has repeatedly attacked civilian targets and infrastructure. It has been met by Palestinian defensive measures; and Israel responds, predictably, with F-16 attacks and tank shelling throughout Gaza, killing some two dozen including three children and two pregnant women, one who was clutching her 14 month old in her arms as both perished.  More than a hundred and fifty other civilians were wounded over several days of Israeli attacks. Almost a thousand civilian housing units, schools and businesses were damaged or destroyed. This latest assault does not yet have an operational name to sell it to the world–marketing Israel’s “bravery” narrative–but surely they’ll think of something catchy to disguise the carnage.”

“When asked, on the day of the 9/11 attacks, how the attacks would affect American-Israeli relations, Benjamin Netanyahu — the current Israeli prime minister — told the New York Times that “It’s very good,” before quickly adding “Well, not very good, but it will generate immediate sympathy.” He then predicted, much as Marmari had, that the attacks would “strengthen the bond between our two peoples, because we’ve experienced terror over so many decades, but the United States has now experienced a massive hemorrhaging of terror.”

Yes, Bibi, absurd is the word, as the US knows how terrorized you’ve been by Iran, Palestinians, and the Houthis in Yemen, which is likely the reason that the US Congress keeps voting to give your nation more money, including a big boost of billions earmarked as military aid.

And those quotes may also resonate when the Trump/Kushner I/P “Deal of the Century” surfaces after Ramadan which began Monday, May 6, ends Monday, June 3.  I’ll bring coverage on the ‘leaked report’ sometime soon.  Think: abject travesties of injustice in a Newly Branded Wrapper.

For further reading: ‘From inspiration to despair: A year of Gaza’s Great March of Return, as Palestinians dream of returning home, Gaza has become synonymous with war, death and suffering’, Yara Hawari, 30 March 2019, middleesateye.net   A teaser:

“In Frames of War, author Judith Butler explains this by unpacking “grievable life,” arguing that in certain frames, some lives are not considered lost if they are not comprehended as living in the first place. The continuous destruction and violence inflicted on Gaza by the Israeli regime has placed it in such a frame, so much so that loss of life has become normalised.

One year on, the Great March of Return protests have become a manifestation of ultimate despair. The effects of the siege and occupation have left more than half of Palestinians in Gaza living in abject poverty, many with serious mental and physical health conditions.”

This entry was posted in empire and war crimes, resistance under oppression. Bookmark the permalink.

One response to “Palestinian Resistance”