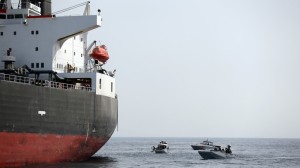 ‘Well who the hell cares about Abu Dhabi’s mum, who the fuck’s she to us, anway?’ hollered Rear Admiral Michael Gilday.  General Rear Gild-the-Lily blustered on: ‘Who the fuck needs ‘evidence’, when we have Intel from Mossad?  And they say those terr’ists had attached magnetic limpet mines, those evil devils.  I don’t know how they delivered them; bathyscaphes or those friggin’ Russian spy dolphins for all I know, but who the hell cares? We know because Mossad told us so.

But The President had warned you that if they fuck with our interests anywhere around the globe, there’ll be hell to pay!  And our interests have a long reach, and don’t you forget it.

Well anyway, on Friday our great Commander-in-Chief ordered 1500 more troops, including a Patriot missile battery and a squadron of fighter jets, supplements the USS Abraham Lincoln aircraft carrier strike group sent to the region earlier this month. It also includes the sending of additional reconnaissance and engineering support staff. to the region to protect our interests.  Take that, Iran!  We’ll get you in the end, mark my words!  We’re going to keep the peace if we have to Bomb the World!

“Moreover, the Pentagon has already deployed nuclear capable B-52’s, F-16C fighter jets and Marines to the Middle East, while drawing up plans to send a further 120,000 military personnel to the region to attack Iran.”

“Should Iran be blamed for an attack on “US interests,” which could include anything from Saudi oil platforms to CIA-backed ISIS terrorist groups in Syria, the troops being sent to the Middle East would rapidly be thrown into a war.

“In addition to preparing for a direct clash with Iran, US imperialism is also arming its regional allies for war. The same day the latest troop increase was announced, the Trump administration released a “Memorandum of Justification” detailing plans to circumvent congressional oversight in order to sell US weapons to Saudi Arabia, the UAE, and Jordan. The memorandum invoked an emergency under the Arms Export Control Act, permitting the executive branch to authorize weapons transfers. The weapons to be sent to the despotic Saudi regime and Gulf allies reportedly include laser-guided bombs. In total, US firms will sell more than $8 billion worth of arms to the three regimes.

Secretary of State Mike Pompeo, who reportedly took the lead within the administration in advocating the sending of additional US troops, said the sale of billions of dollars of US weaponry to Washington’s allies was necessary to guard against “Iranian aggression.”

The statement announcing the weapons sales also justified the illegal transfer of bombs to the despotic Saudi regime as a counter to the “fundamental threat of malign Iranian activity” across the Middle East. This threat included an unsubstantiated allegation that Iran was responsible for the deaths of “over 600” US military personnel in Iraq.”

“The US war drive in the Middle East does not arise from the personal proclivities of Trump, his attack dog Pompeo, or his hawkish National Security Adviser John Bolton, who has been urging the US to bomb Iran for years. Rather, it is part of the US ruling elite’s effort to consolidate its unchallenged domination over the energy-rich and geo-strategically critical Middle East, and push back the influence of its chief rivals, above all Russia and China.

The reality is that Washington’s reckless escalation of military tensions with Iran enjoys bipartisan support. Ahead of this week’s State Department threat against Syria for alleged chemical weapons use, leading Democrats in both houses of Congress signed an appeal demanding that the White House “increase pressure on Iran and Russia with respect to activities in Syria.”

US Seeks War to Save Waning Middle East Influence

(six mins; the links are under the video on youtube; ‘Eye-raq, Eye-ran’, eeep.)