further indications that the Pentagon is preparing for war on Iran 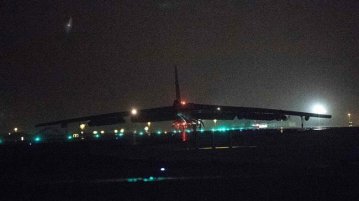 (I know it’s longish, but it’s all of a piece, and of major importance as well, imo.)

‘Amid tensions with Iran, US shifts Middle East command from Qatar to S Carolina’, Sept. 30, 2019, presstv.com

“The United States Air Force temporarily shifts its command center from Qatar to South Carolina amid US President Donald Trump’s escalation of tensions with Iran.
The unannounced operation marked the first time in 13  years that the US command and control was moved out of the region, reported The Washington Post, which had been invited to observe the measure.”

As a result, the Combined Air and Space Operations Center at al-Udeid Air Base in Qatar was left empty on Saturday and Shaw Air Force Base in South Carolina was put in charge of controlling US operations from 7,000 miles away.

“The functions that the CAOC provides for air power are so critical and so essential that we can’t afford to have a single point of failure,” said Major General B. Chance Saltzman, using an acronym for the center.”

I did try to read about it the issue at the WaPo, but it’s still behind a paywall for me, and I sure wonder what angle they’re spouting./s.  But consider this lying rubbish from the good Colonel I’ve bolded, when actually what Rouhani and Zarif have said continually, the equivalent of ‘we won’t start a war, but if you come for us, we’ll finish it’.  My second bold is rubbish, as well.

“Colonel Frederick Coleman, the commander of the 609th Air and Space Operations Center, also claimed that, “Iran has indicated multiple times through multiple sources their intent to attack US forces.”

“Frankly, as the war against ISIS winds down and as we continue to work through a potential peace process in Afghanistan, the region is calming down and potentially more stable than it has been in decades, except for Iran,” he alleged.” [snip]

“Douglas Barrie, a senior fellow specializing in aerospace at the International Institute for Strategic Studies in London, stressed the importance of the command center, saying that, “It doesn’t take a whole heap of imagination to look at it and think, if push came to shove and it was a full blown conflict, it would be one of the priority targets.”

The Middle East Eye explains some of technical issues that other coverage had stated, but were even more confusing to me:

“The air base is the largest in the Middle East region, capable of housing more than 10,000 US troops. Although the move was only temporary, with al-Udeid taking back control on Sunday after 24 hours, it appears to indicate a significant tactical shift in US thinking.

While air force personnel said moving functions to a different base had been a long-harboured ambition enabled by new technology, the move comes amid renewed tension with Iran, which lies around 300km to the northeast.

The unannounced operation was the first time US command and control had been moved out of the region since the centre was established in Saudi Arabia during the 1991 First Gulf War.

Air force personnel told the Washington Post that recent incidents involving Iran – including the shooting down of a US drone in June and the attack on Saudi oil facilities this month with what the US said appeared to be Iranian-supplied weapons – had added urgency to the project.

If conflict with Iran were to occur, the base in Qatar would be a prime target for Iran.

The US air force aims to run the centre remotely once a month and remain the rest of the time at al-Udeid.

Eventually, commanders want to work up to a schedule in which the centre is operated remotely for eight hours of every 24-hour period, either at Shaw or elsewhere.”

Bill van Auken’s coverage is quite blunt, and likely exactly right given that he’d read the WaPo version:

‘Pentagon shifts Mideast command center to US in preparation for war on Iran’, Bill Van Auken, 1 October 2019 (a few bits):

“The report added that issue had become more pressing following the September 14 attacks on Saudi oil installations, which temporarily cut the kingdom’s production in half and sent oil prices soaring by 20 percent. While Yemen’s Houthi rebels claimed responsibility for the attack, Washington, the Saudi monarchy and the major European imperialist powers have blamed Iran, while as yet providing no evidence to support their accusations.”

“This operational change constitutes a deadly serious warning that Washington is making active preparations for yet another war in the Middle East, this one against a country with nearly three times the population and four times the land mass of Iraq. Moreover, due to its massive oil and gas resources and its strategic centrality to control over the Eurasian landmass, a war against Iran would inevitably draw in all of the major powers, including nuclear-armed Russia and China. And, unlike Iraq under the regime of Saddam Hussein, Iran has made serious preparations to fight back.”

“Whether he was speaking just for the Saudi monarchy or its patron in Washington is unclear. The Saudi regime has ample reason to fear a direct military confrontation with Iran. While inundated with tens of billions of dollars worth of advanced weapons from the US, the UK and other suppliers, Riyadh was incapable of defending its most vital facilities against a drone attack.”

“While the US has thus far refrained from carrying out military strikes against Iran, it has conducted other forms of warfare. This includes an economic blockade of the country. This “maximum pressure” campaign, aimed at slashing Iranian oil exports to zero, has been steadily tightened with escalating sanctions. It has resulted in the cutting off of imported food and medicine to Iranians, leading to numerous deaths of people denied drugs for cancer and other diseases.

“There is a cyber-war going on,” he said on the NBC news program “Meet the Press” Sunday. “The United States started that cyber war, with attacking our nuclear facilities in a very dangerous, irresponsible way that could have killed millions of people.”

This is FM Zarif’s interview with Snotty Toddy on Meet the Press (about 20 minutes):

Zarif: “There is a cyber-war, and Iran is engaged in that cyber war. Any war that the United States starts, it won’t be able to finish.”

Now some additional background behind this provocative Pentagon COAC move:

‘Iran’s Rouhani at UN: No talks with US without sanctions relief; Iranian president invites Gulf countries to join coalition in Strait of Hormuz region’, middeleasteye.net, 25 September 2019

“About 24 hours before Rouhani’s speech, Trump tried to rally the world against Iran from the same stage.

“All nations have a duty to act. No responsible government should subsidise Iran‘s blood lust. As long as Iran’s menacing behavior continues, sanctions will not be lifted. They will be tightened,” Trump said on Tuesday.

He (Rouhani) called for the two countries to return to the negotiating table without sanctions, urging Washington to abide by the framework of the original agreement and adding that the US should “pay more” if it wants a wider nuclear deal.

“The only way for talks to begin is to return to commitments and compliance,” he said. “Stop the sanctions, so as to open the way for the start of negotiations.”

Rouhani also said he was not interested in meeting Trump or top US officials in the early stages of talks.

“Memorial photos are the last stage of negotiations, not the first,” he said.

Later on Wednesday, US Secretary of State Mike Pompeo responded to Rouhani’s speech, repeating Trump’s call to mobilise the world against Iran and accusing the Iranian leader of being deceitful.

“Rouhani is desperate to deceive because the world is awakening to the truth. The truth is that Iran responds to strength and not to supplication,” Pompeo said at an anti-Iran meeting in New York.

“More and more nations are beginning to stand up to Iran’s thuggish behavior, and disengaging economically. We will ensure that all of them do.” [snip]

On Monday, France, Britain and Germany issued a joint statement saying it was clear that Iran was responsible for the attack, but also calling for a return to the negotiating table.” [snip]

Iran has denied responsibility for the recent attacks on Saudi oil facilities as well as on oil tankers passing through the Strait of Hormuz earlier this summer.

Rouhani used his speech at the UN to invite Gulf countries to join what he termed the “Coalition of HOPE”, which he said stands for the Hormuz peace endeavor.

“The goal of the Coalition of Hope is to build peace, stability, progress, and welfare for all of the residents of the Strait of Hormuz region,” Rouhani said.

He added that the initiative would call for energy security and the free transfer of oil through the strait. Still, the Iranian president used the announcement to take a jab at the US role in the region.

“The security of our region shall be provided when American troops pull out,” Rouhani said.

“Security shall not be supplied with American weapons and intervention.”

“Zarif said on Saturday that Trump was merely trying to hold a meeting with Iranian President Hassan Rouhani during the latter’s stay in New York this week, adding that the US president was unwilling to accept that sanctions imposed by his government on Tehran should be lifted as a main precondition for talks with Iran.

He said, however, that a direct meeting between Trump and Rouhani had never been on agenda and Iran basically wanted a meeting between heads of states signatory to a 2015 agreement on Iran’s nuclear activity which has suffered since Trump’s administration withdrew from the deal in May 2018.” [snip]

“Iran had indicated that talks would be possible only if Washington returns to the Iran nuclear deal while insisting that Washington should remove all sanctions imposed on the country since November last year.

Zarif said in his Saturday interview that Iran would never commit to a “theatrical meeting with a president that has not observed his obligations”.

“If the Americans want to have the honor of being the conversation partner of the Islamic Republic, they must return to their commitments and stop the sanctions,” he said.”

Now let’s see; which nations had helped negotiate the 2015 JCPOA but refuse to pressure the US to end the sanctions and re-join the agreement again?  Oh, well:

One analyst I’d read opined that as the President is busy with impeachment inquiries and Congressional demands for his tax documents, etc., it”s Thug Pompeo running his FP; perhaps the ghost of John McCrankypants and Joltin’ Bolton’s toxic fumes as well?

Like Loading...
This entry was posted in empire and war crimes and tagged #HandsOff Iran!. Bookmark the permalink.