a Bibi under indictment is becoming even more savage 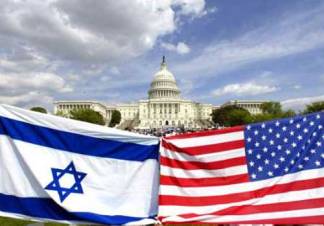 Please begone, Bibi!  And kiss my grits for aiding and abetting him, Donald Trump!

“Israel had two parliament elections this year which both ended in a political stalemate. Neither Prime Minister Netanyahoo of the Likud Party nor Blue and White coalition leader Benny Gantz managed to form a government. Both were unable to find enough additional votes to form a coalition and to gain a majority.

Now the parliament has 21 days to find a majority. It will likely fail and a third election seems inevitable.

It is curious that Israel’s Attorney General used this point in time to finally charge Netanyahoo:

He then explains that the charges have been simmering for some time now, and that he believes the timing seems political.

He also posits that Bibi will come under intense pressure to resign, and believes that it’s his personality that’s blocked him from forming a new government, which requires an alliance of the magical number of 61  Members of the Knesset.  He also adds that if he’s removed from office over the next 21 days, the Knesset (Israeli Parliament) might be abe to form a government and avoid an election.

“But Netanyahoo will fight tooth and nail to gain and keep immunity. He will try to delegitimize the judicative and he will use any available trick to stay in office.

That makes him even more dangerous than he usually is.

He might even decide to do something, like starting a big war, to prevent his removal from power.

Lebanon, Syria and Iran must watch out.”

Presciently enough: ‘Gideon Sa’ar: If I were Netanyahu, I would resign; Internal Likud Party struggles come amid increasing tension between the prime minister and his and allies against primary challenger Gideon Sa’ar’, NOV. 26, 2019, jpost.com

“The fight for leadership of the Likud Party heated up Tuesday morning, as various party members have begun accusing main primary challenger Gideon Sa’ar of  going against the interests of the party amid the legal woes of its leader Prime Minister Benjamin Netanyahu and the threat of a third election.

The internal fight within the party grew more tense following comments and interviews given by Sa’ar, in which he said that Netanyahu he should be held accountable, “not because of the indictment, but because of his inability to form a government and his reluctance to follow the democratic process.”

Two days earlier, this: ‘Netanyahu agrees to hold Likud leadership primary in next six weeks; As MK Nir Barkat pledges loyalty to PM and feuds publicly with challenger Gideon Sa’ar, premier refuses to answer whether he will seek immunity from prosecution, by TOI staff,  24 November 2019

Netanyahu sought to sound upbeat on a tour of the northern border on Sunday, insisting the legal turmoil had not hindered his ability to govern.” [snip]

“Following reports that Mandelblit was set to issue a formal legal opinion on whether Netanyahu, while facing indictment, could even be tasked with forming a coalition, Channel 12 on Sunday said the attorney general did not plan to do so immediately.

Responding to media queries, sources close to Mandelblit said he would only offer an opinion on the question if Netanyahu were to obtain the support of a majority of MKs to form a government before the December 11 deadline, and otherwise “has no intention of dealing with hypothetical questions.”

And this?  Oy and veh; you called it, bernhard!  ‘Attorney general blasts ‘threats, lies, slander’ against judiciary over PM cases; As Likud supporters gather at Tel Aviv rally, Avichai Mandelblit issues rebuke of Netanyahu, who has accused law enforcement of staging an ‘attempted coup’,  26 November 2019, timesofisrael.com

“It seems more than coincidence that as the legal noose tightens around Prime Minister Benjamin “Bibi” Netanyahu, Israeli military have suddenly stepped up air strikes on Iranian forces based in Syria.

If Netanyahu is ousted from office he will be immediately subjected to trial. A subsequent conviction on all charges could result in him facing up to 13 years in jail. A lot is at stake for Israel’s elder statesmen. Therefore the longer he can hang on as premier, the longer he can postpone his day in court, as the leadership position affords a certain immunity while in office.” [snip]

“That means the temptation will be ever-stronger for the hot-headed commando-turned-politician to rile up security tensions with Iran and Syria, as well as neighboring Palestinians. Netanyahu has always drummed up votes by presenting himself as the great defender of Israelis.

Over the past week…Israeli forces under his command launched deadly air strikes against Iranian targets in Syria. Reports indicated that around 23 people were killed, most of whom were Iranian military belonging to the elite Quds Force. Though Syrian media claimed that most of the attacks were intercepted. Whether Iranian personnel were killed or not, the Israeli intention is to provoke Tehran.”

Notably, Israeli military usually do not confirm or deny when they carry out air strikes on Syria or neighboring countries. This week, however, Israeli leaders including Netanyahu were bragging about the strikes.” [snip]

“The Israelis claim they were responding to rockets fired from the Golan Heights. But it seems those rockets were provoked by earlier Israeli strikes on Syria just days before.

There is more than a suspicion that Israel was orchestrating the pretext for a flare up in violence. The purpose being to allow Netanyahu to dust off his war medals and flex his muscles for the electorate.

“Over the past month, Israeli forces have also escalated air strikes on Gaza with dozens of civilians being killed, including families and children. Netanyahu has been cynically winding up fears among Israelis of rocket attacks from Palestinian militants in the besieged Gaza strip. But in ginning up tensions with Iran in such a provocative way by targeting its elite Quds Force in Syria, Netanyahu is playing with fire.” [snip]

“Again, Trump seems to be aiding and abetting Netanyahu’s agenda of inciting national security tensions with Iran in order to hand Netanyahu a get-out-of-jail card.”

And right on cue:  ‘House resolution supports Israel’s right to defend itself;

“We must stand with our historic ally, Israel – the key democracy in the region,” Congressman Josh Gottheimer said in a statement, Nov. 25, 2019, jpost.com “WASHINGTON – Following the recent rocket attack by Palestinian Islamic Jihad two weeks ago, when terrorists from Gaza fired hundreds of rockets into Israel, a bipartisan group of House lawmakers introduced House Resolution 727 on Friday, condemning terrorist rocket attacks on Israel and supporting Israel’s right to defend itself.

“When heinous terrorist groups like Palestinian Islamic Jihad fire hundreds of rockets at innocent civilians in Israel, there should be no question who the United States stands with,” Gottheimer said in a statement.’, yada, yada.

‘Amnesty International Toes US Gov’t Line in Urging Unrest in Iran; the US gov’t has long attempted to foment popular uprisings and hijack or manipulate protests in Iran, now rights groups like Amnesty International, seem to be parroting the tactic’, by Alan Macleod, Nov. 25, 2019, mintpressnews.com

“The U.S. government has lent its full support to anti-government protesters in Iran. “The United States is with you,” announced Secretary of State Mike Pompeo. Vice President Mike Pence was similarly emphatic.

Widespread, peaceful protests originally flared up on November 15, after an unexpected overnight tripling of fuel prices. However, these were soon overtaken by more militant, violent confrontations with security forces. Over a dozen gas stations and more than 70 banks are reported to have been destroyed. The proceeds from the price hike were reportedly intended to subsidize low-income Iranians, although the reasons for the increase were not explained, leading to a public outcry.

Amnesty International reports that at least 115 protestors have been killed in the violence, and puts the blame squarely on Iranian security forces, suggesting the final death toll may be “much higher.” The Iranian government rejects these figures, claiming only a handful of people have died, including at least four members of government security forces at the hands of rioters. Inside the country, the Internet was shut down for over a week, adding to the confusion.” 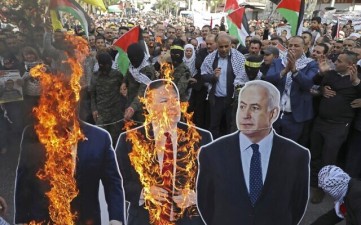 “Thousands of Palestinians demonstrated across the West Bank on Tuesday to protest the recent US announcement that it no longer believes Israeli settlements in the West Bank violate international law. As the so-called “day of rage” continued, groups of protesters clashed with Israeli security forces in several flashpoints, with 77 reported lightly injured.

“The biased American policy toward Israel, and the American support of the Israeli settlements and the Israeli occupation, leaves us with only one option: To go back to resistance,” Mahmoud Aloul, an official with Palestinian Authority President Mahmoud Abbas’s Fatah movement, told the crowd in Ramallah.

Organized by Fatah, Tuesday’s protests focused on the Trump administration’s announcement on Israeli settlements last week. The decision upended four decades of American policy and embraced the Israeli government’s longtime view that settlements are legal, a move the Palestinians view as coming at the expense of their quest for statehood.”

“At least 8 people with alleged links to the CIA were detained by Iranian authorities amid the ongoing protests in the Middle Eastern country.

“These elements had received CIA-funded training in various countries under the cover of becoming citizen-journalists,” the Iranian Intelligence Ministry was quoted as saying by the Islamic Republic News Agency (IRNA). “Six were arrested while attending the riots and carrying out (CIA) orders and two while trying to … send information abroad.”

This entry was posted in electoral politics, empire and war crimes. Bookmark the permalink.