And it couldn’t have happened to a more worthy putz…er…peckerwood.  The wealthiest man in the world treats his wage slaves like…slaves, including surveilling them in the work place, including with wristbands that monitor their hand movements to speed up work in Amazon warehouses.  This story has many faces by now; here are a few.  Oh, but first: it may be that Bezos hasn’t disavowed the selfies, so he may not be ripe for what I’d advised Anthony Weiner back in the day, and that was to claim: “Hey, that’s  not my weiner; mine’s much bigger!”

“In a new development in the conspiratorial epic unfolding around the world’s richest man and his girlfriend, the latter’s brother suggested that rumours about him having been paid to expose Jeff Bezos’ extramarital affair were being spread intentionally.

Michael Sanchez, the brother of Amazon founder and CEO Jeff Bezos’ girlfriend, has sued the Amazon.com Inc. founder for defamation, alleging that he and his security expert falsely claimed that he had leaked graphic nude photos of Mr Bezos to the press.

Sanchez’s suit claims that false statements by Bezos and his security consultant Gavin de Becker led to, among other things, a Federal Bureau of Investigation raid at his house, a loss of business opportunities, and misunderstanding in his family.

In the case, Mr Sanchez, a Hollywood talent manager, claimed unspecified damages from Bezos and de Becker “in an amount appropriate to punish and make an example of defendants”, according to the Mail Online.

According to Michael Sanchez, the couple was initially told by a psychic in New Mexico to keep their intimate relationship secret, and then they used him, Lauren’s brother, to make it public.

Lauren Sanchez, meanwhile, commented through her lawyer, Terry Bird: “Michael is my older brother. He secretly provided my most personal information to The National Enquirer — a deep and unforgivable betrayal. My family is hurting over this new baseless and untrue lawsuit, and we truly hope my brother finds peace”. 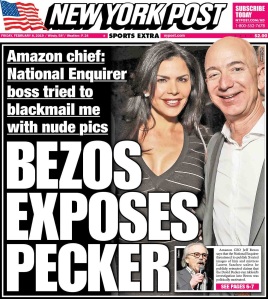 “REVEALED: The shirtless selfies, a photo of his genitals and lusty texts Jeff Bezos sent his married mistress – as it emerges the pair hooked up in hotels, private jets and BOTH their marital homes for months before he announced his divorce

Vox.com (as had other news organizations) had alluded to a Trump Connection on Feb. 15, 2020: ‘The story pits the richest man in the world against some of President Trump’s closest media allies’

“Then in a February blog post, Jeff Bezos wrote that executives from the National Enquirer’s parent company, American Media Inc., had threatened to release the “lewd selfies” unless Bezos released a statement saying that the Enquirer had no political motivation for its exposé on him.

Bezos refused, instead publishing what he said were emails from AMI executives attempting to extort him. AMI has said it’s investigating the matter. Meanwhile, speculation around Trump’s connection to the story has intensified since the Daily Beast reported that Sanchez’s brother Michael Sanchez, a Hollywood manager and vocal Trump supporter, had leaked the texts to AMI.” [snip]

“Meanwhile, commentators began to raise questions about whether Trump had a hand in the Enquirer’s story. Trump has deep ties to AMI — the company paid former Playboy model Karen McDougal $150,000 in a 2016 “catch and kill” agreement to keep her from speaking publicly about an affair she said she had with Trump. AMI sources told Ronan Farrow of the New Yorker last year that AMI had also paid $30,000 to a former Trump Tower doorman in order to shut down a story about Trump fathering a child with a former employee (Farrow found no evidence the story was actually true). David Pecker, the chair and CEO of AMI, has described Trump as a “personal friend,” Farrow notes.

Trump, for his part, has a very public distaste for Jeff Bezos, whom he has called “Jeff Bozo.” He once reportedly pressed the US postmaster general to up Amazon’s shipping costs. The president’s anti-Bezos stance likely has to do with the Amazon CEO’s ownership of the Washington Post — which, as David Smith notes at the Guardian, is “a bastion of what he calls the ‘fake news’ media.” Trump has been linking Amazon, Bezos, and the Post on Twitter since before he was president:

If @amazon ever had to pay fair taxes, its stock would crash and it would crumble like a paper bag. The @washingtonpost scam is saving it!