First, Part 4 of UkraineGate (of a projected 8 parts) from Les-Crises.fr has been published.

The Summary version (9 minutes) of Shokin Strikes Back is here.

The site doesn’t mention copyrights nor Creative Commons, so I’ll paste in some of the lengthy text, a few of the many, many graphics, then allow you to continue to peruse the rest of the study.

“It is one of the most important aspects of our media system, and yet hardly known to the public: most of the international news coverage in Western media is provided by only three global news agencies based in New York, London and Paris.

The key role played by these agencies means Western media often report on the same topics, even using the same wording. In addition, governments, military and intelligence services use these global news agencies as multipliers to spread their messages around the world.

A study of the Syria war coverage by nine leading European newspapers clearly illustrates these issues: 78% of all articles were based in whole or in part on agency reports, yet 0% on investigative research. Moreover, 82% of all opinion pieces and interviews were in favor of a US and NATO intervention, while propaganda was attributed exclusively to the opposite side.” [snip] 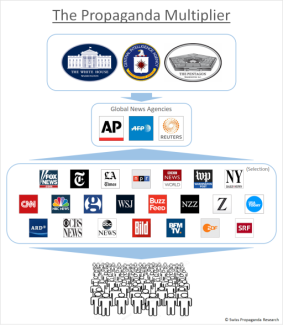 “The Invisible Nerve Center of the Media System”

So what are the names of these agencies that are “always at the source of the story”? There are now only three global news agencies left:

In addition, many countries run their own news agencies. These include, for instance, the German DPA, the Austrian APA, and the Swiss SDA. When it comes to international news, however, national agencies usually rely on the three global agencies and simply copy and translate their reports.

“In the end, this dependency on the global agencies creates a striking similarity in international reporting: from Vienna to Washington, our media often report the same topics, using many of the same phrases – a phenomenon that would otherwise rather be associated with »controlled media« in authoritarian states.

The following graphic shows some examples from German and international publications. As you can see, despite the claimed objectivity, a slight (geo-)political bias sometimes creeps in.

““What the agency does not report, does not take place”

The central role of news agencies also explains why, in geopolitical conflicts, most media use the same original sources. In the Syrian war, for example, the “Syrian Observatory for Human Rights” – a dubious one-man organization based in London –  featured prominently. The media rarely inquired directly at this “Observatory”, as its operator was in fact difficult to reach, even for journalists.

Rather, the “Observatory” delivered its stories to global agencies, which then forwarded them to thousands of media outlets, which in turn “informed” hundreds of millions of readers and viewers worldwide. The reason why the agencies, of all places, referred to this strange “Observatory” in their reporting – and who really financed it – is a question that was rarely asked.”

The rest is here, along with other titles and other languages.

This entry was posted in psyops and propaganda and tagged UkraineGate. Bookmark the permalink.