Updates on J. Assange ahead of his Feb 24 Extradition Hearing

Phase one will last a week, according to District Judge Vanessa Baraitser; phase two will commence in May and take up to three weeks..

‘First they came for Julian, next for you’: Waters, Westwood join massive London rally against Assange extradition (photos and video)’, RT.com, Feb. 22, 2020
“Thousands have protested near the British Parliament against WikiLeaks co-founder Julian Assange’s looming extradition to the US ahead of the hearing next week.

Demonstrators marched from Australia House to Parliament Square near the Palace of Westminster, where both houses of Parliament are located.”

Reporters without Borders are asking us to sign their petition against Julian Assange’s extradition to the United Sates.

“Members of imprisoned WikiLeaks journalist Julian Assange’s legal team held a press conference, together with Assange’s father John Shipton, on Thursday in Paris. They announced that they will seek asylum in France for Assange, the publisher of WikiLeaks who has been relentlessly hounded by Washington and the European powers for nearly a decade and is currently held in Belmarsh prison near London.

They will also challenge his threatened extradition to the United States by launching a suit before the European Court of Human Rights (ECHR) in Strasbourg. This strategy is viable despite Brexit, as the ECHR is attached not to the European Union but to the Council of Europe, of which Britain remains a member.” [snip]

“This illegitimate and shocking persecution of a individual for publishing vital information opens the way for Assange to receive asylum in France, Dupond-Moretti said: “We are of course working on the possibility of requesting political asylum from the French authorities. Our constitution permits it. … Article 53 of our Constitution allows France to serve as a refuge to any person who is threatened for defending freedom of expression.”

Dupond-Moretti also pointed to Assange’s extensive personal ties to France—where WikiLeaks was first incorporated, where many of its servers reside, and where his partner and youngest child live.

“We will ask to meet the president of France in the coming days, in fact in the coming hours” over this asylum request, Dupond-Moretti stated.

Dupont-Moretti and Vey also explained that they are working to formulate a new legal basis for bringing Assange’s case before the EHCR, which has previously ruled that it could not examine Assange’s case as it lacked jurisdiction due to a technicality. [snip]

“Baltasar Garzón—well known for his role in trying to prosecute Chilean dictator Augusto Pinochet in Spain, and in investigating the crimes of the Spanish fascist regime covered by the illegitimate 1977 Amnesty Law—pointed to the rampant criminality of the US-led prosecution of Assange.

He said, “The very same people pursuing him as a delinquent are those who have committed crimes in order to pursue him. … A very grave injustice is being committed, which can affect the entire community of independent media, as well as freedom of expression. It is an attempt to silence all those who are critical of the state.” [snip]

“Spanish courts are already investigating Spanish security firm Undercover Global, that gave the CIA audio and video of Assange and his meetings with his lawyers and supporters at the Ecuadorian embassy in London. Garzón said this investigation could provide proof to UK courts “that the trial of Assange is a political trial by the United States, aiming to prevent the exposure by Mr Assange of criminal behavior by US state agencies.”

Garzón added, “Currently we are doing detailed work to study materials … showing a systematic violation of Julian Assange’s rights, given that all Assange’s documents for his trial were taken from him by Ecuadorian President Lenín Moreno. Moreno gave this documentation to the United States at their request. This documentation should not be held by the US government but by Mr Assange.”

“Information has come to light demonstrating that the chief magistrate overseeing the extradition proceedings against Julian Assange received financial benefits from organizations with close ties to the UK Foreign Office prior to her appointment.

According to a report on Friday in the South African-based Daily Maverick, Lady Emma Arbuthnot attended, along with her husband Lord Arbuthnot of Edrom, all-expenses-paid secretive gatherings of the organizations Tertulias and Tatlidil in 2014 that included numerous UK foreign policy officials. Lady Arbuthnot was appointed chief magistrate in Westminster in October 2016.

Although as of November 2019 Arbuthnot is no longer formally presiding over the Assange extradition proceedings, she has refused to recuse herself and remains in a supervisory role overseeing the trial with her subordinate District Judge Vanessa Baraitser on the bench. According to the UK court rules, the chief magistrate is “responsible for … supporting and guiding district judge colleagues.”

The Daily Maverick report states: “Tertulias, an annual forum held for political and corporate leaders in the UK and Spain, is regarded by the UK Foreign Office as one of its ‘partnerships’.” In attendance at the Tertulias conference in Bilbao, Spain in October 2014 was Conservative Party member Liz Truss, who is now UK Trade Secretary. The report says, “Liz Truss, then Justice Secretary, ‘advised’ the Queen to appoint Lady Arbuthnot in October 2016.”

The expenses of Lady Arbuthnot at the Bilbao conference were covered by the Tertulias organization, since her husband, “a former Conservative defense minister with extensive links to the British military and intelligence community exposed by WikiLeaks,” was the chairman of the organization.

Lady Arbuthnot was also present with her husband at the British-Turkish Tatlidil Forum in Istanbul in November 2014. Daily Maverick describes Tatlidil (Turkish for “sweet talk”) as “a forum established by the UK and Turkish governments for ‘high level’ individuals involved in politics and business.” Those present included Turkish President Recep Tayyip Erdoğan. 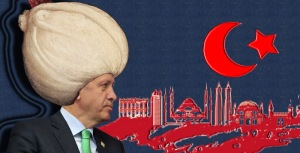 “The report states that the UK delegation to the Tatlidil forum in Istanbul, “was led by Prince Andrew, who also hosted the Tatlidil in Edinburgh the previous year. Then foreign minister Tobias Ellwood spoke at the forum while former foreign secretary Jack Straw, who is a co-chair of Tatlidil, presided over one of the discussions. Erdoğan spoke at the meeting and reportedly called for the removal of Syrian leader Bashar al-Assad.” [snip]

“The very same people from the UK Foreign Office with whom Chief Magistrate Arbuthnot had been hobnobbing before her appointment have made the most vociferous denunciations of Assange, calling him “a miserable little worm.” They refused to recognize his right to asylum in Ecuador, leaving him trapped inside the Ecuadorian Embassy in London for seven years before British police dragged him out and arrested him last April.” [snip]

“Last year, when the fact that her husband was a leading figure of British foreign policy was originally brought to light as a violation of the “Guide to Judicial Conduct” in England and Wales, Arbuthnot ignored calls for her recusal. Yet the activities of Lord Arbuthnot and his associates at the defense contractor Thales and British intelligence were the subject of thousands of WikiLeaks exposures, making the conflict of interest that much more obvious.

The role of the Arbuthnots in the persecution and imprisonment of Assange, and his extradition trial that is set to begin on Monday, is a critical indicator of the high-level conspiracy by powerful individuals in the British government, in cooperation with Washington DC, to punish and destroy the WikiLeaks founder.”

Qui male agit odit lucem.  (The one who commits evil shuns the light.)

A powerful light was shone on Belmarsh prison and the Houses of Parliament last night. Must watch. #DontExtraditeAssange #collateralmurder pic.twitter.com/l56JmOsyHx

5 responses to “Updates on J. Assange ahead of his Feb 24 Extradition Hearing”