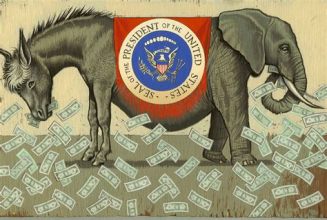 The House passed the Senate version last night; they’d already agreed to.  It’s long, but it needs to be, imo.  Consider it a a rage of fury on behalf of the underclass.

‘The bipartisan “small business” swindle: Billions for the banks and corporations, pennies for workers and shopkeepers’  Barry Grey, 23 April 2020, wsw.org

“Scores of multi-million- and billion-dollar corporations are receiving free handouts from the government under the “small business” relief fund grotesquely misnamed the “Paycheck Protection Program” (PPP). The program was launched last month as part of the $2.2 trillion CARES Act, with $349 billion in taxpayer funds.

Billed as a lifeline to small businesses and their employees, the program has been exposed as a cynical fraud. Multiple reports have emerged showing that it is first and foremost a cash cow for large businesses and the Wall Street banks. It is yet another example of how the corporate-financial elite is exploiting the coronavirus catastrophe to further enrich itself at the expense of society and at the cost of human lives.” […]

“While big restaurant chains and other firms whose stock is traded on Wall Street gobbled up large portions of the “small business” relief money, and the major Wall Street banks pocketed $10 billion in loan fees, family-owned restaurants, barber shops, beauty salons, retail stores and other small firms were pushed to the back of the line or denied relief outright.

The program ran out of funds last Thursday, less than two weeks after it was launched, leaving hundreds of thousands of small businesses high and dry and their millions of laid-off employees facing destitution. Now the Trump administration and Congress are rushing to inject an additional $310 billion into the PPP.

On Wednesday, the Senate passed by unanimous consent a new $484 billion bailout bill, whose central component is the renewal of the PPP. At the urging of the Democrats, looking to provide a “progressive” fig leaf to the pro-corporate measure, and with the agreement of Trump, the bill tacked on a totally inadequate $75 billion for hospitals and a derisory $25 billion for COVID-19 testing.” […]

“According to a Financial Times article published on Tuesday, 83 publicly traded companies received a combined $330 million in loans from the PPP program, an average of $4 million each. The combined stock value of these firms at the end of 2019 was $12 billion.

Other published figures show how the program is skewed to big companies. More than 25 percent of the $349 billion in loans went to fewer than two percent of the firms that got relief. And more than one out of every four dollars in the fund went toward big loans of $2 million and above.

Meanwhile, just eight percent of small businesses that have applied for aid under the CARES Act have received money.”

‘The New Coronavirus Relief Bill Is a Disappointment, for no good reason, it falls far short of what we need to prevent a depression’, April 21, 2020, slate.com   (only slightly partisan...)

“Many hoped they would force the administration to finally bail out our ailing Postal Service, which President Donald Trump has reportedly refused to help. Others wanted it to expand voting by mail in this year’s elections, while Democratic leaders themselves sought to include more funding for state and local governments, which have seen their tax collections go up in smoke.

What did Democrats get? Congress is going to stick a $310 billion IV infusion into the Paycheck Protection Program while pumping much-needed money into an even more woefully underfunded disaster loan program that’s equally important, if not more so, for many small businesses struggling to survive. It’s setting aside $75 billion to help hospitals and $25 billion for a national effort to ramp up coronavirus testing (contra Grunwald’s tweet above, the bill does include contact tracing).

“It was presented to the public as being open only to businesses with fewer than 500 workers and less than $2 billion in revenue.

However, after lobbying by restaurant and hotel chains, Congress agreed to the insertion of a provision making larger companies eligible for PPP money, as long as none of their individual locations employed 500 people. As a result, multimillion- and billion-dollar chains such as Ruth’s Chris steakhouses, Shake Shack, Potbelly and J. Alexander were given priority by Wall Street banks, including JPMorgan, Bank of America and Wells Fargo. They approved loans for large companies ranging from $15 to $20 million each, while hundreds of thousands of family-owned restaurants, beauty and barber shops, gas stations and small retail outlets were shut out.” […]

“Sixty billion dollars of the new PPP funding is to be handled by smaller “community” banks, with the intention of ensuring that minority-owned businesses get a share of the money.” […]

“The Democrats had made a show of pushing for additional money for hospitals and coronavirus testing, as well as for aid to state and city governments that are facing massive deficits due to collapsing tax revenues, and for more funding for the food stamp program. There is nothing in the series of corporate bailout bills enacted since the eruption of the coronavirus crisis to address the staggering growth of hunger in America. The consequences of repeated cuts in the food stamp program and social programs more broadly under Obama as well as Trump are now seen in massive food lines spreading across the country.

(Democrats) abjectly dropped their demand for relief to state and local governments and additional funding for food stamps.

The failure to secure aid to the states and localities is particularly significant. Depression levels of unemployment and negative economic growth are bankrupting state and local governments across the country.

Trump, for his part, is deliberately withholding aid from states and cities in order to pressure them to reopen their economies more quickly. He and Republican congressional leaders have held out the possibility of discussing such aid in a new round of bailout legislation.”

He follows with a list of governors who are already engaged in austerity bugets; I’ll bring two examples:

“New York’s Democratic mayor, Bill de Blasio, announced last week that he would slash over $2 billion in city services over the next year. He plans to close public pools, reduce sanitation pickups, suspend the summer youth employment program and impose a hiring freeze.

Detroit’s Democratic mayor, Mike Duggan, has threatened to throw the city back into bankruptcy and bring in an emergency financial manager to impose new cuts in social services, pensions and jobs.”

“Small businesses of color are being excluded from the PPP program; without specific reforms this will continue.

The problem: The most significant small business relief program—the SBA’s Paycheck Protection Plan (PPP)—will provide no benefit at all to the vast majority of businesses owned by people of color.

How big is this problem? Huge. Businesses of color account for 30% of all U.S. businesses, contributing 7.2 million jobs and $1.38 trillion in revenue to the economy (as of 2012, most recent available data)—and are a substantial source of income and employment in communities of color.

Communities of color already are bearing the harshest impacts of the COVID-19 crisis, with higher levels of job loss and illness. They must receive their fair share of COVID-19 relief and recovery.”

In mid-April, jobless claims for unemployment compensation hit 26.4 million, or 15% of the workforce. Economists (including the IMF) have warned that the world is facing the sharpest slowdown since the Great Depression in the 1930s.  Is it time to consider the low lethality of the virus compared to the lethalities of being in lockdown?

“Hudson: A debt cancellation is needed when debts go beyond the ability to be paid, and all personal debts, all non-business debts, tend to mount up beyond what can be repaid. You have debt-strapped individuals right now who lost their jobs, or their stores have closed down, or they work in restaurants and they’re unable to earn the money to pay. Arrears are rising on student debts [and] on automobile loans, it’s obvious that the debts are growing so large that the only way of paying them is to foreclose on the property, or let them be homeless, or kick them out in the streets.  And the reason that the Babylonians and the early Jews cancel the debts was not because they were idealists. They weren’t egalitarians. All the debts have to be canceled by the government. And the government cancels it because it doesn’t want to make the economy fall into austerity. It doesn’t want people to lose their livelihood and become unproductive members of society. The reason your cancel the debts is you want to preserve stability.” […]

“The problem is that somebody has to lose when the debts can’t be paid. And the question is who should lose? Should it be the poorest people, should it be the wage earners? Should it be the small businesses, or should it be the banks? Well, one way or another, it has to be either the banks, or else the government will simply create the money to reimburse the banks. But in terms of justice, the banks have made an enormous amount since 2008. They were bailed out in 2008, their net worth and their stocks have soared in value. So, logically, the banks should lose something and bear some of the costs. And the government can simply pay for the cost just as it pays for military expenditures, or for Social Security, or anything else. The government’s able, simply, to print the money. What makes it hard today is that the debts are owed to the banks, and to the landlords, and to private creditors, and they’re very politically powerful. So this is going to be the political struggle or conflict that is unfolding in the next few months in the United States.”

A fascinating concept, save for Iceland having defaulted on its IMF loans, and came out of the 2008 doldrums quite well.  Likely he’s dreaming, as well, but I will say that those of us who aren’t in debt, but living on a knife’s edge just trying to get by, say on social security or Unemployment benefits…will need more relief than that.

Now as to the $25 billion for ‘testing and tracing’, it seems that the Rockefeller Foundation has brewed up a Covid-19 testing action plan: ‘Pragmatic steps to reopen our workplaces and our communities’

“Our National Covid-19 Testing Action Plan lays out the precise steps necessary to enact robust testing, tracing, and coordination to more safely reopen our economy – starting with a dramatic expansion of testing from 1 million tests per week to initially 3 million per week and then 30 million per week, backed by an Emergency Network for Covid-19 Testing to coordinate and underwrite the testing market, a public-private testing technology accelerator, and a national initiative to rapidly expand and optimize the use of U.S., university, and local lab capacity. The plan also includes: launching a Covid Community Healthcare Corps so every American can easily get tested with privacy-centric contact tracing; a testing data commons and digital platform to track Covid-19 statuses, resources, and effective treatment protocols across states and be a clearinghouse for data on new technologies; and a Pandemic Testing Board, in line with other recommendations, to bridge divides across governmental jurisdictions and professional fields.” […]

/Authors of PTB include Rajiv Shah, pres. of #Rockefeller Shah has worked on #vaccine financing for #Gates. “His bio is the embodiment of the current phase of “green” #imperialism (@cordeliers) w/ a new woke patina of “equality” & “stakeholder #capitalism“.

Here’s the whole deeply deeply creepy ⁦@BillGates⁩ essay in which he maps out his plans for the whole planet and for your body in unqualified declarative sentences. https://t.co/a0u6mMJE9o